The Soulstealers by Jacqueline Rohrbach - Release Blitz with Excerpt and Giveaway 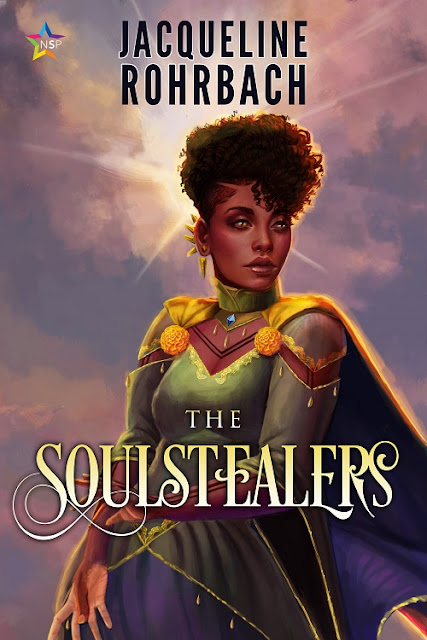 Arnaka Skytree grew up believing she was chosen to bring new magic to the world. As the heir to the cult of druids responsible for keeping their floating palace habitable for the wealthy aristocracy, she’s expected to wield her power as those before her did: by culling the souls of peasant women.

But when Arnaka learns more about the source of her magic, and that her best friend’s soul will be harvested, she embarks on a journey to end the barbarous practice and to restore a long-forgotten harmonious system of magic practiced by the original druids. Along the way, she discovers she’s not the only girl chosen to restore balance to their world—many others have powerful magic inside, and with them, she will tear the floating palace from the sky so everyone can live in the sun—out of the shadow of the eclipse.

Flowers bloomed around Arnaka Skytree. Tiger lilies tickled her feet while orchids pried open one eye. Rose, the pricklier of the three, stuck her with one of its thorns. She puffed some air up in its direction, fluttering petals and her bangs. Late for her Choosing, Arnaka forced the insistent garden out of her mind, to focus on the currents of air traveling around her, picking out the magic radiating from the flowers the way her older brother picked out soldiers to die for him—delicately, decidedly.

Strong magic ran in her family. The ritual she had to go to was nothing but a mere formality. She would be a druid like all the other women in her family before her, down to the original matriarch—Arnaka the Creator—whose name she shouldered. She was bound to it the way her magic was bound to living things. Soon, it would be the last tattoo burned by magical fire into her skin.

Squeezing her eyes shut, she pressed her finger deep into the sifted dirt around her, begging the world to swallow her whole. The flowers, sensing her sadness, bowed their heads, but they couldn’t give her what she wanted. Destiny’s feet were too heavy for soft petals.

“Lady Arnaka? Are you here?”

Nara, one of her maids, stumbled into the conservatory. Arnaka felt the young woman’s life force before she opened her eyes to watch the bony girl blunder over the flowers, which recoiled from her steps, lifting their leafy underparts to avoid a trampling. Arnaka gave Nara’s approach a small, fond smile.

When she finally saw Arnaka, Nara jumped as if surprised. Her brown eyes widened, giving her the appearance of a deer about to be speared. “Lady Arnaka. Your mother wants you in the hall for the ceremony.”

“She sent me here to get you.”

Arnaka sighed. Nara, who was brought here as a servant and lived on the daily whims of her captors, had no choice but to play her role in today’s events. She wasn’t trying to drag Arnaka to the ceremony out of spite, avarice, or revenge. Doing her job without getting hurt was her only goal.

Nara hopped from one foot to the other. Voice barely above a whisper, she said, “I’m supposed to escort you, Lady Arnaka.”

Arnaka lifted her head and glowered at the servant, hoping the severe expression might be enough to send her on her way. Having company on the long trek toward the hall forced Arnaka to be strong. Really, all she wanted to do was run, hide, vanish.

You promised, she reminded herself. You promised you’d go through with this, and that you’d keep it from happening to anyone else.

With a wince, the servant tried again. “My lady, please. Your mother. She’ll—”

“Very well. Come on,” Arnaka interjected before Nara completed the statement with “punish me.” Hearing about her mother’s temper coupled with her propensity to harshly correct servants for slight failures would only twist Arnaka’s already knotted emotions.

Said as if she had a choice. “You’re welcome.”

Banter wasn’t something Arnaka lavished on the silly, sweet girl. The walk down the hall was silent. Nara didn’t seem to mind the quiet, or notice. Newly employed, she occupied a world where magic was still magical. The diamond archways casting rainbows to the reflective surface beneath their feet dazzled. Gold shone. Ruby and sapphire mosaics sparked her brown eyes to flame. Tiredly, Arnaka grabbed the gawking servant, who tripped over her own feet as she ogled the spectacle, by the upper arm to drag her inside the transport.

In moments, they arrived. In front of them, the entire court gathered. Thousands of nobles, maybe more, in their best attire.

Her mother broke from the crowd and rushed over. “Arnaka, my daughter. You are radiant today.”

Both of them had black skin that always seemed moonlit and black hair that grew in thick waves. Her mother’s was always swept up into elaborate twists. Arnaka cut hers rebelliously short, letting her curly bangs cover her golden eyes, the pride of her family line. Look into your future mirror, the elder druids always liked to say, you are the spitting image of your mother.

Although her mother was undeniably beautiful with her high cheekbones and angular features, Arnaka’s pleasure in hearing about their resemblance waned. She didn’t want to be kin to a monster.

The swirl of Mother’s elaborate gown extended a foot or two in each direction. Mercurial as the woman herself, its folds, bows, frills, and ruffles shifted on whim in color and in style until she settled on a deep royal purple with a long ivory lace train that fluttered in the air like a cobweb in the breeze.

“Wasteful as always, Mother.” Arnaka pointed to the dress, to which she still made minor adjustments. Meanwhile, the living gathered around her looked wary. Druid magic required life, willing or not. “Glad you settled on something before the whole assembly was depleted.”

A few of the nobles glanced at their feet and cleared their throats but did not comment on the awkward exchange. Her brother puffed his chest. “Sister,” he bellowed, not unlike a braying goat. “We have waited for this moment your whole life.”

Lacking the refinement of magic, Escan’s features looked blunt and staggered as though whoever carved him had jittered uncontrollably during the process. Only his eyes, the color of golden flame that was his family’s legacy, rendered him attractive. Every girl wanted babies with ladder-climbing genes and nothing said advancement quite like the bloodline of old aristocracy. Otherwise, her brother lacked figurative magic as well as literal. He was doing his best to steal the moment despite it.

Arnaka looked at the assembly of aristocrats before her. Like her mother, they wanted all the religion with none of the sacrifice religion required. Servants were there to pay the life price for their magic. In a pinch, merchants would do. Who better to understand there was a cost to doing business? This was probably the first time in centuries any of them felt the intrusive pull of magic’s touch at their own doorstep.

Resigned to what was to be, Arnaka raised her voice to carry across the room. “I am here to bring new magic.”

Applause broke out. Arnaka winced away from it, hating the fact they clapped for her, for the evil thing they were about to do. You promised her, Arnaka had to remind herself again. You looked her in the eye and said you’d go through with this, then you’d keep it from happening to anyone else.

She’d been so focused on remembering her vow that she forgot the ceremony. The pain from the burning as her final tattoo, a small circle on her forehead, seared her skin surprised her. More than any of the other tattoos branded into her arms and back, it hurt with pain beyond the smell of her own flesh, beyond the residual throb of the wound. It foretold what was to come after.

As the smoke around her cleared, a young woman a few years older than her was escorted forward. Unnamed at birth, she existed to be Arnaka’s spirit sister until she became a soul familiar, forever bound to serve as an instant source of magic. But Arnaka knew her name, a deep secret between them that she’d sworn to keep. She held onto it even as the knife plunged into the young woman’s throat. She thought it when the soul heeled at her side—Hannah. Again when she went to bed with the thing looming over her shoulder—Hannah. Only once more after that. 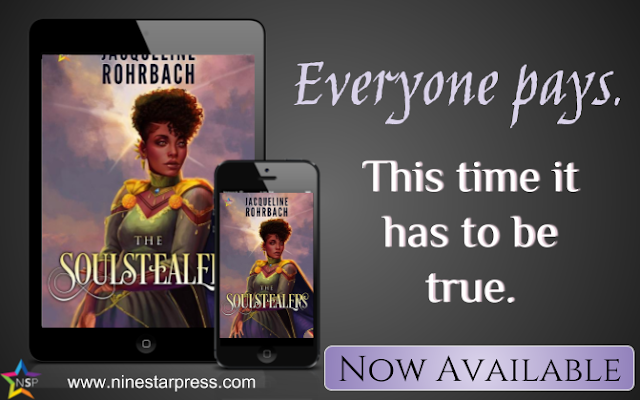 Jacqueline Rohrbach is a 36-year-old creative writer living in windy central Washington. When she isn’t writing strange books about bloodsucking magical werewolves, she’s baking sweets, or walking her two dogs, Nibbler and Mulder. She also loves cheesy ghost shows, especially when the hosts call out the ghost out like he wants to brawl with it in a bar. You know, “Come out here, you coward! You like to haunt little kids. Haunt me!” Jackee laughs at this EVERY time.

She’s also a hopeless World of Warcraft addict. In her heyday, she was a top parsing disc priest. She became a paladin to fight Deathwing, she went back to a priest to cuddle pandas, and then she went to a shaman because I guess she thought it would be fun to spend an entire expansion underpowered and frustrated. Boomchicken for Legion! Follow Jacqueline on Twitter.