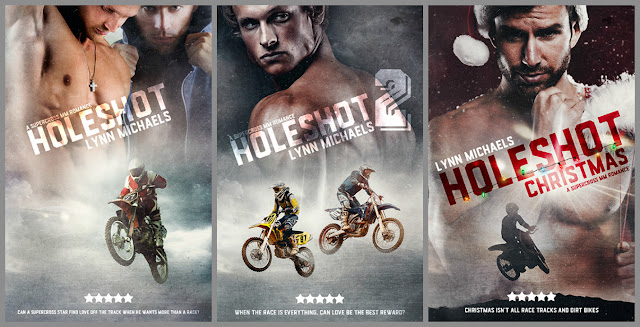 Available exclusive to Amazon and Available to Borrow with Kindle Unlimited

In the world of Supercross, taking the holeshot means one racer leaps ahead of the crowd and into first, leaving the rest of the pack behind. If Supercross racer Davey McAllister knows anything, it's how to take the holeshot. When the hot rising star mechanic, Tyler Whitmore, shows up in his bed, Davey does just that. But, dating a competitor's mechanic threatens to blow his ride if anyone finds out. With the fear of losing his sponsors, he has to keep his love life completely under cover, but Davey is in deep and wants to tell the world how much he loves Tyler.

Tyler Whitmore wants to be out of the closet, but dating the competition is a death sentence for his career. Overprotective of Davey's reputation and his own dreams, Tyler refuses to commit to his lover and is afraid of falling hard. Will they ever be able to find their way through the Premiere racing league pitfalls and acknowledge their love?

In the world of Supercross, taking the holeshot means one racer leaps ahead of the crowd and into first, leaving the rest of the pack behind. Supercross racer, Tate Jordan, wants to take his holeshot on and off the track, but no one else seems to cooperate. His love life is in turmoil and his sponsors don’t expect him to win. Will Tate find someone new to love and a team that believes in him?

Pilot Mahan is a bodyguard and a street fighter looking to build a future, but his plans get derailed when a Supercross racer catches his eye. Can he make a go at a life with Tate Jordan, on the road?

Bryce Nickel is new to Supercross and adulthood. He’s young and fun, but super serious about what he wants. And what he wants is to win races and Tate Jordan. Will he be able to take his holeshot or will the big Apex bodyguard get in the way? Or perhaps, the three can make a compromise?

Christmas isn’t all race tracks and dirt bikes for Davey and Tyler, especially when they don’t see things about each other in quite the same way.

Lynn Michaels lives and writes in Tampa, Florida where the sun is hot and the Sangria is cold. Lynn is the newest addition to Rubicon Fiction, and she loves reading and writing about hot men in love. She writes paranormal and contemporary MM Romance