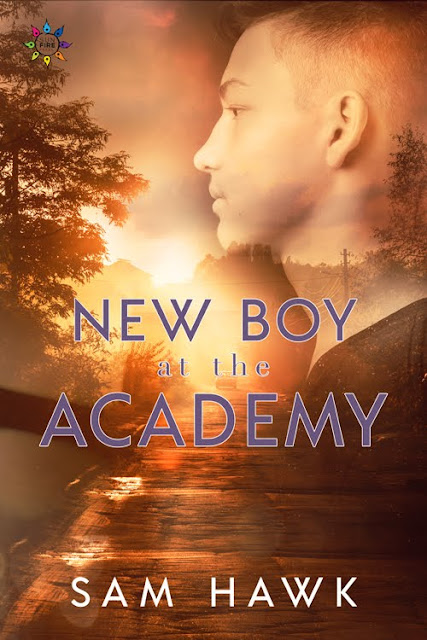 Timmy had no clue that the first day of 10th grade at the Academy would rock his world. He thought it would be just like last year, with its endless bullying and recesses spent reshelving books in the library with his best and only friend Carleen. The sissy boy and the fat girl had bonded over their shared outcast status. But Carleen shows up filled with sassy confidence and declares they’re going to rule the school. By Christmas, the freaks and nerds would be the cool kids, and the mean girls and jocks would be the outcasts. Something had happened to her over the summer, but what?

And then, the two of them lay eyes on the new boy at the Academy. Doug has auburn feathered hair, veiny biceps, and green eyes the color of Sprite bottles. Plus, he’s come all the way from exotic Los Angeles, California. He rocks out to Patti Smith while Timmy loves ABBA. How does someone so cool end up in tiny, conservative Edgewood, South Carolina?

When Carleen immediately declares Doug a fox and her new prospective boyfriend, Timmy is shocked at his jealous reaction. He’s not supposed to like boys in that way, is he? Doug stirs up weird new emotions deep inside him as Timmy embarks on the adventure of his life. He and his hometown will never be the same.

Carleen had been helping reshelve books since fifth grade and convinced the librarian, Miss Ouzts, to let me help out too during break. I always looked forward to break in the library with Carleen, and I wanted to talk about the new boy now that we were away from all those nosey kids in the lunchroom.
Carleen rolled up a cart of books. As I grabbed one to put on the shelf, I asked, trying to sound casual, “So, do you really think the new boy’s cute?”
“You mean the one you keep staring at?” Carleen asked.
“I do not stare at him.”
“You do and you’re right, he’s like, super cute.”
“I didn’t mean I thought he was cute,” I said. “I just wanted to know what you thought. He seems nice, I guess. I like his hair.”
“Eww. You’re not supposed to notice a boy’s hair.” Carleen pulled Reese’s Cups out of her purse.
She looked around to make sure Miss Ouzts was away from her desk, then opened the package and gave me one. There was no eating in the library, but Carleen always managed to sneak a Reese’s Cup for dessert after lunch. Sometimes two.
“Why can’t I notice a boy’s hair?”
“It’s weird,” she declared.
“For the umpteenth time, I don’t notice cute boys, I only notice cute girls. I only said I liked his hair because it’s auburn, like my mother’s, that’s all. I like auburn hair. Tina Louise has auburn hair. I like Tina Louise. She’s a real fox—don’t you think?”
Carleen put another book on the shelf. “Tina Louise is like a hundred years old. Don’t you know those Gilligan’s Island shows are re-runs? They’re from like ten years ago when we were little kids. I suppose you like Mrs. Howell, too? Oh, she’s so foxy.”
She laughed at her own joke. I grabbed another stack of books to shelve and pretended like I didn’t hear her.
“Anyway,” she said, “you’re just not supposed to like a boy’s hair. It’s sissified. You don’t want people talking about you being sissified. We’re in tenth grade now.”
“I’m not sissified.” I said, too loud for the library.
“Hurry up and eat your Reese’s. Miss Ouzts will be back any minute.”
I popped the whole Reese’s in my mouth, and we shelved books in silence for a few minutes.
“Do you really want to screw him?” I asked.
“You mean Doug?”
“Yeah.”
“Of course I do; he’s sexy.”
I thought about this a few minutes while I shelved some more books.
“Why do you think Doug is sexy?” I asked.
“Wouldn’t you like to know…”
“No, not really,” I said. “I’m just making conversation.”
Carleen put down her books and turned to me. “Well, first of all, have you seen those biceps? He’s got veins popping right out of ’em.”
“I know. How did he get those? I bet he uses barbells and stuff.”
“Then there’s his hair. Wouldn’t you just love to run your hands through it?”
“Yeah,” I said, with a slight sigh.
“Ah-hah!” said Carleen. “You do notice cute guys!”
“I do not! I just like his hair is all.”
“All right then, prove it. Name a sexy girl. Who would you want to do it with?”
“I think Kate Jackson is sexy,” I said.
“Oh, gross[em1] . Kate Jackson isn’t sexy. Jaclyn Smith is sexy. Why do you think they put her in the bikinis all the time while Kate wears turtlenecks? Don’t you know anything? God, you’re so dumb.”
“You shouldn’t say God, and besides, girls aren’t supposed to say other girls are sexy.”
“Yes, we can,” said Carleen. “Boys aren’t supposed to notice when other boys are sexy, but a girl can say it about another girl. It doesn’t mean anything when a girl says it.”
“Why not? I think Jon and Ponch on CHiPs are sexy,” I said. “It doesn’t mean I want to screw them. I only want to screw Kate Jackson or Jaclyn Smith. Tom Selleck is sexy too. It’s okay to recognize that a man is good-looking.”
“No, it’s not. Boys can’t say that. Stop saying it. Besides, Tom Selleck is too hairy. He’s just gross.”
I didn’t think Tom’s hairiness was gross, but I decided to keep that to myself.

New Boy at the Academy
Sam Hawk © 2019
All Rights Reserved

God didn’t answer my prayers and bring the Rapture on Labor Day, so I had to start tenth grade after all. I stepped in front of the mirror to assess my new back-to-school outfit. I hated it. I’d begged Momma to buy me the alligator shirt from Belk’s, which really cost her a lot, but did it have to hug my body so much? I tried stretching it out, but it would only stretch so far. I thought I’d look like Tom Selleck with his big veiny arms. Instead, I looked like the Pillsbury Doughboy. I was trying to flex my chest when Momma walked in.

“Honey, get a move on. We have to be out the door in fifteen minutes, and you haven’t even touched your Pop-Tarts.”

“Momma, I think I need to change clothes.”

“What are you talking about?” she asked as she pulled and tugged on my shirt. “This is what you wanted. You look very handsome.”

“Timmy, I have told you time and again you’re not fat. It’s all in your head. You are absolutely average on the height and weight scale and exactly where you need to be at fifteen.” She patted my tummy, causing me to suck in. “You’ll lose that little bit of pudge in no time in gym class.”

My heart sank at the thought of gym class, and I almost lost my appetite for Pop-Tarts. Almost. Momma smoothed down my cowlick at the kitchen table as I bit into the brown sugar cinnamon pastry.

I guessed my hairline was okay, but my new haircut was way too short. Daddy had taken me to get it cut only after Momma called him ten times to remind him. He and Momma got divorced when I was two, and it was always weird when he came by, which wasn’t often. Naturally, he took me to the awful old barbershop next to the pool hall instead of the new unisex salon in the Augusta Mall I was secretly hoping for. He told the barber to “buzz it” and then went next door for a beer. I managed to talk the barber into keeping a little length, but not much.

“Now go brush your teeth quick as a bunny rabbit,” said Momma. “Carleen’s mother called this morning and said her car’s not running and could I run by and pick her up for school. So, we have no time.”

Carleen’s house was across the tracks, and I knew Momma didn’t like going over there, but Carleen had been my best friend since kindergarten. Actually, you could say she was my only friend. She was the only one I talked to for hours on the phone at night; the only one I hung out with after school; the only one to ever invite me to a sleepover, which Momma had never allowed me to do since boy-girl sleepovers just weren’t done. I hadn’t seen her all summer because she’d been working at her grandparents’ peach farm. I was glad we’d be going to school together on the first day. I needed my friend with me.

We pulled in front of the house, and Carleen came right out.

Momma was right. Carleen had always been the biggest girl in class, and she wasn’t getting any smaller. I recognized her smock top from last year. A smock top was supposed to fit loose, but hers pulled in all the wrong places.

“Hey, Carleen,” said Momma as Carleen got in the car. “You sure do look pretty for your first day of school.”

“Thank you, Mrs. Thompson,” said Carleen. I waited for an eye roll, but she just smiled at Momma like she really believed it. I looked at her more closely, and there was something different about her. Was it confidence? If so, it was new. Was that lip gloss she was wearing?

“Hey, Timmy, did you hear we’re getting a new boy in our class this year?”

“No,” I said, dreading the addition of another redneck bubba to the roster.

“They say he’s from California and he’s real cute.”

“I think his momma’s people are here. He’s related to all those Herlongs.”

“Does that explain the lip gloss?”

“I just wanted to look pretty for the first day of school,” replied Carleen.

When Momma pulled up in front of Patriot Christian, Carleen looked me square in the eye and gave me a big smile and a thumbs-up.

“Come on, Timmy. We’re gonna rule the school in tenth grade. Let’s do it.” 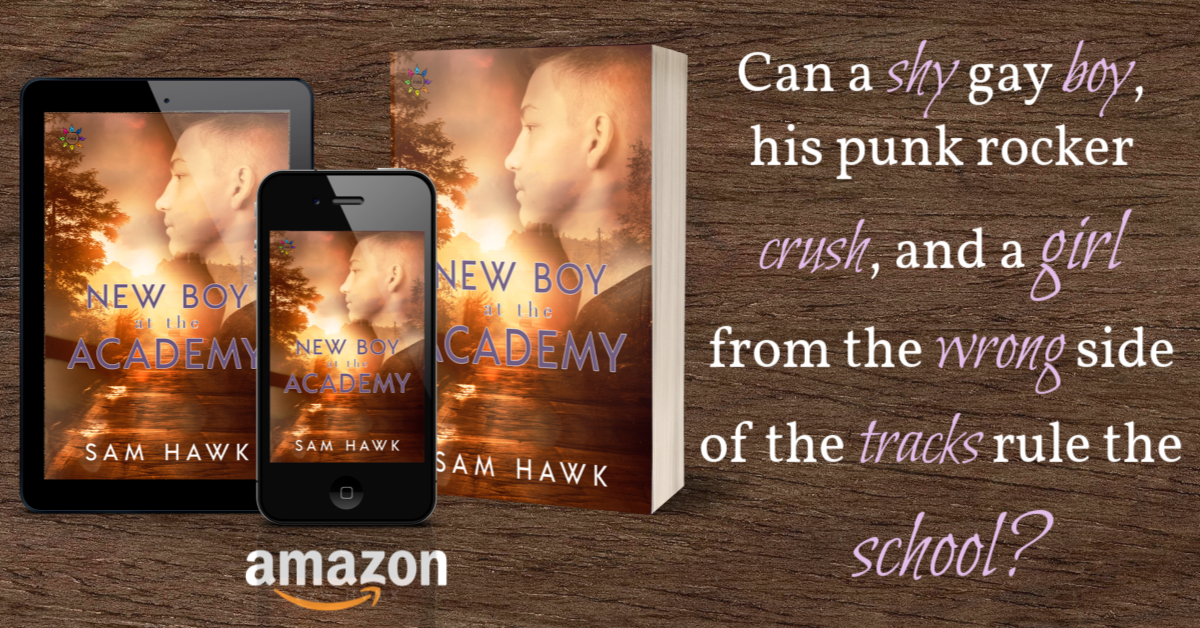 Sam Hawk’s fiction is inspired by his experiences at a private Christian Academy in rural South Carolina in the ’70s. He survived his Southern adolescence with his sanity relatively intact and went on to earn degrees from the College of Charleston and the University of South Carolina Law School. He also served in the U.S. Army as a JAG officer for twelve years. He resigned his commission when it became clear he was expected to persecute homosexuals as part of his job. Sam then moved to Dallas, Texas where he met the man of his dreams and found his LGBT family. Sam and his husband have been married for over ten years and live with their Corgi and Chartreux cat in the requisite charming old house in a historic district where gay couples are legally compelled to live.