A Walk Through Fire by Felice Stevens - Blog Tour with Review 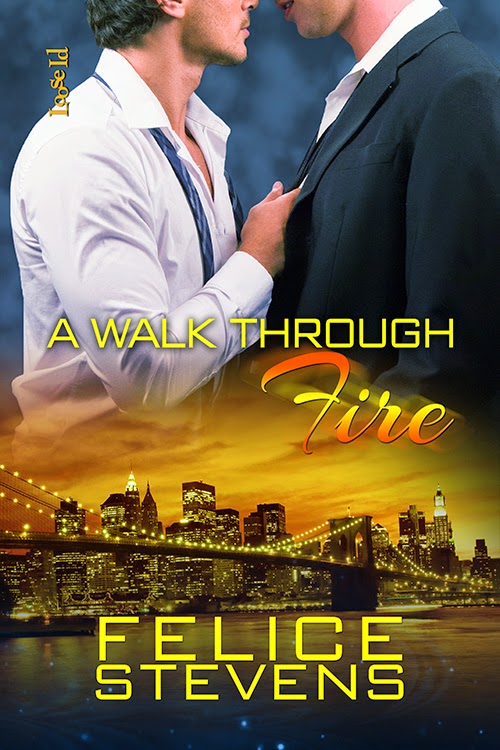 “Have a drink, Drew, and tell me why you’re here.” Ash sipped his vodka and stared at him over the rim of his glass.
“No, thanks, I’m driving. But I do want to talk to you.” The man was a study in contrasts. Drew couldn’t think of a time he hadn’t seen Ash perfectly dressed, every hair in place, looking like he’d stepped out of a men’s fashion magazine.
Tonight however…well he looked off-kilter. Though he still had on his clothes from earlier, that white button down shirt and black slacks, the shirt was wrinkled and unbuttoned lower than he’d ever seen. Dark stubble shadowed along his jaw, and his hair lay unkempt and disheveled. Drew shifted on the sofa. “Look, I know this may sound stupid, but my grandmother was concerned about you, so she asked me to stop by and check up on you.”
“And of course you do everything your nana says.”
Drew’s face flamed. “Fuck you, Davis.”
A tiny smirk hit the corner of Ash’s lips. “What’s the matter, Doc? The truth hurts?”
The bastard. After all the nice things his grandmother had said about him, how she’d worried about him, this was his response? To act like the snide sarcastic son of a bitch he was at their first meeting? How dare he treat her concern as if it were nothing? And to think he’d actually thought they were friends. “What the hell do you know about the truth, huh? No one knows anything about you; you have no friends, no lover.” He stood, ready to leave. “No wonder you’re all alone. No one cares about you. You aren’t worth it.” Shit, he’d never spoken so cruelly to anyone. But then again, no one had ever gotten under his skin like Ash Davis.
Like a snake uncoiled, Ash jumped off the sofa and grabbed him by the shoulder. “Take that back.”
“What’s the matter, Davis? The truth hurts?” He mimicked Ash’s earlier words to him, and saw a flare of anger gleam in those colorless, glittering eyes.
“You fucking bastard. Who are you to say I’m not worth it, that no one cares about me? I have friends. People like me. Don’t you ever say I’m not worth it. I matter goddamn you. I fucking matter.”
Ash tried to grab onto him, but Drew wrenched away and took off for the door, speaking over his shoulder.
“People don’t like you, Ash, they want to fuck you because you’re beautiful. That’s not liking. That’s not a friendship. How many relationships have you ever had with another man? You’ve never even had a boyfriend or a permanent relationship have you, because you have to have a heart. You have to care about someone. How can you value someone else in your life when you don’t even value yourself?”

So I discovered this awesome gem of an author with her debut book, Rescued. For a debut it was pretty damn perfect, great characters, adorable pit bulls, and a good solid story. Well when I heard she had A Walk Through Fire coming out, I was excited and then I read the blurb and I was like gimme this book now.

A Walk Through Fire is a very different book then Rescued but it does have similarities. Both have characters that are broken, Walk Through Fire's Ash is more than broken, he's shattered and at first doesn't seem quite repairable or redeemable. Okay,so bluntly Ash is a class A asshole and manwhore. Since Ash is a high power lawyer handling a messy divorce, the asshole part serves him well. Drew, on the other hand, is a really laid back, easy going guy who's kind of let his younger sister, Rachel, and his best friend, Jordan, direct his life.

While Ash is instantly drawn to Drew, the same can't be said for Drew, at first. Drew appears to be straight, or is he? At first he seems to be freaked out by his attraction to Ash, then he wavers, and then he jumps in feet first and falls into bed with Ash. The story develops from there with Drew and Ash in a push-pull type of relationship. Drew is willing to see where things go, and Ash saying he's not a forever kind of man/don't expect that out of him, etc.

There are a lot of very hot, steamy smexy man moments in this book. There are also quite a few sweet, smooshy, lovely moments between Ash and Drew. Finally though Drew finds his feet and tells everyone to deal with him as he is or f**k off. In a little better terms than that of course. The storyline is well written and moves at a steady pace that keeps the characters at the forefront. There is some action in this story but there's also a lot of inner and between character dialogue. All of which is essential to this story.

A Walk Through Fire is a very strong lead off into what looks to be a new series for Felice Stevens. I can not wait to see which character(s) she chooses to feature next. I will give a bit of a twofold warning as one of the characters was abused as a child and is still a cutter and I know that's a trigger for some readers. There is also another character suffering abuse which does not occur on scene. These scenes are minimal but are an impact to both the characters and the storyline.

I really enjoyed this story as it took me through a gamut of emotions toward the main and secondary characters. I recommend this book for those that like characters that skirt then line of being irredeemable, and characters who learn to stand up for themselves and what/who makes them complete. 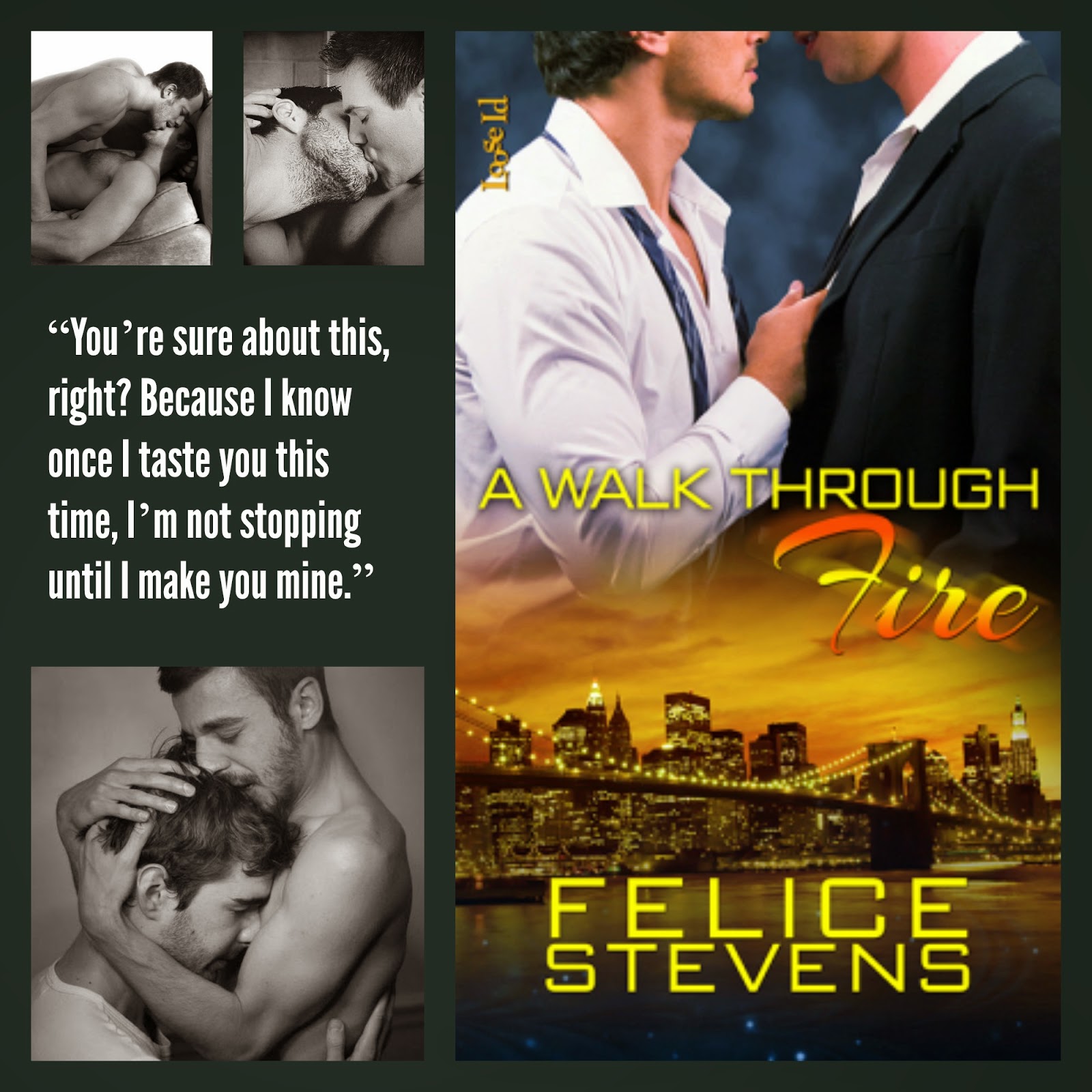 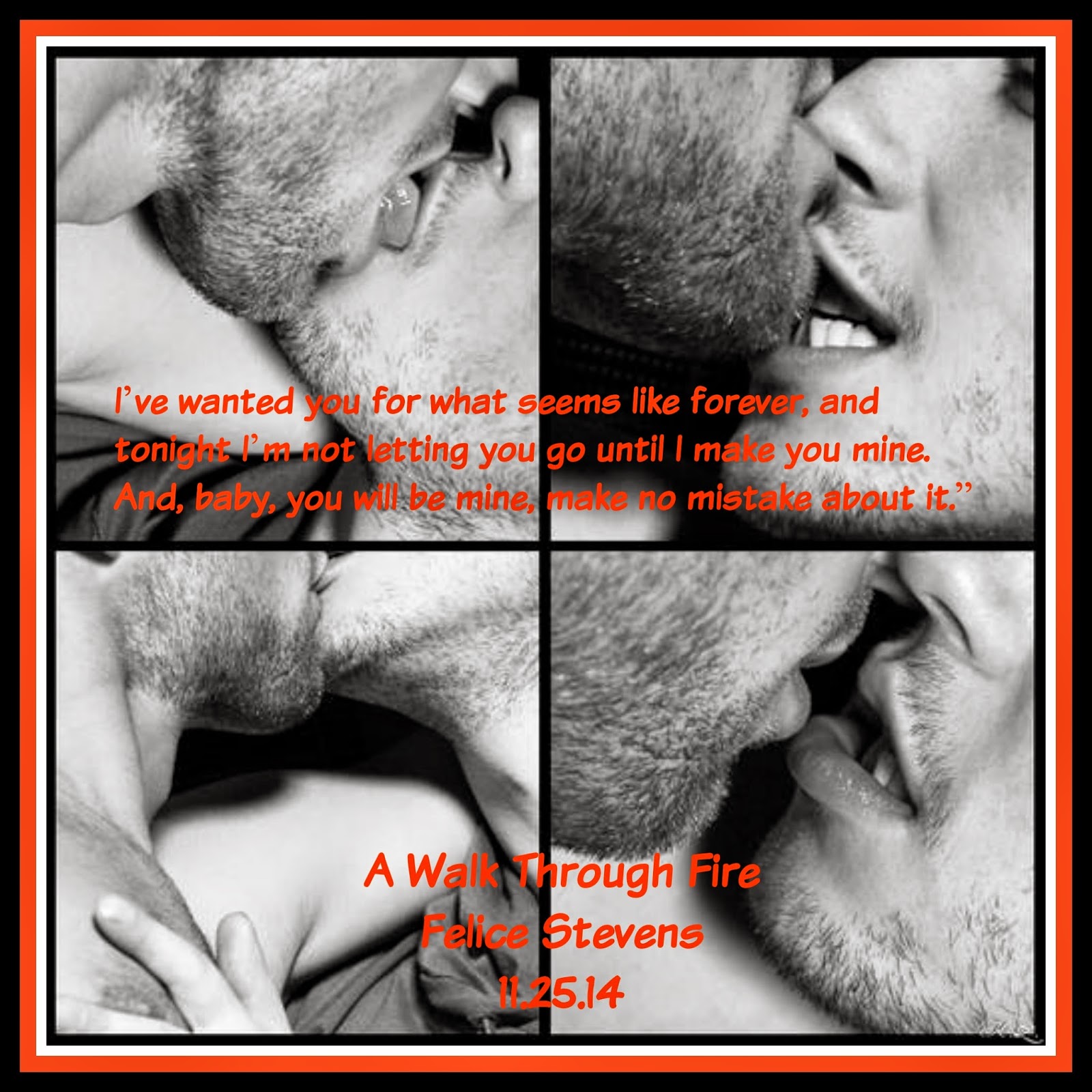