Here Comes Trouble by A.E. Via - Blog stop with Excerpt and Review 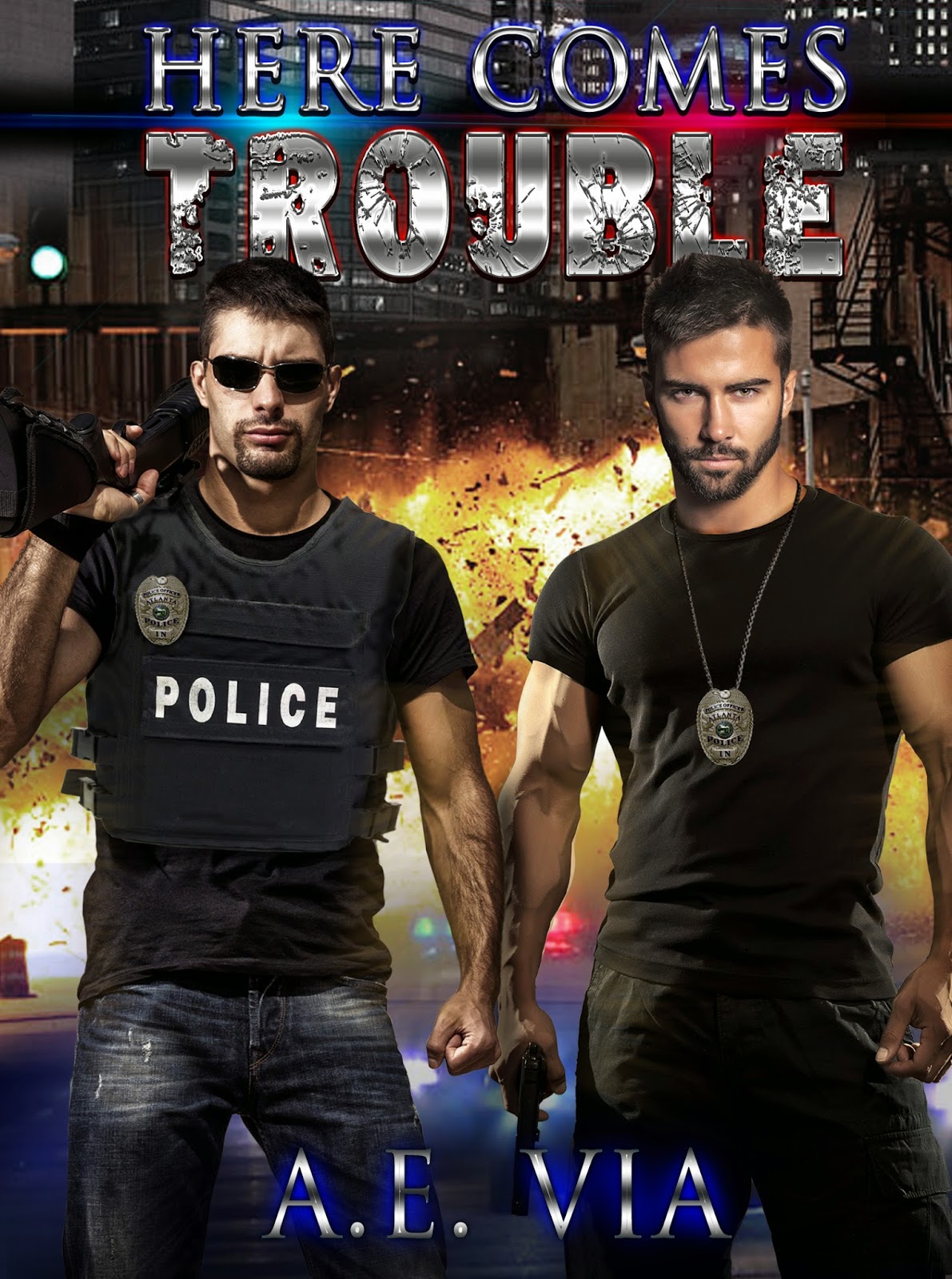 Detectives Mark Ruxsberg and Chris Green are very good at their jobs. Being the enforcers for God and Day's notorious Atlanta PD Narcotics Task Force causes the crazy duo to get into more trouble than they can often get out of. The pair never misses out on an opportunity to drive their Lieutenants crazy with their dangerous, reckless, and costly stunts, landing them in the hot seat in front God... often.

Ruxs and Green love their jobs and they don't mind the very demanding schedule that leaves them little time for socializing or dating. It was fine with them, they enjoyed hanging out with each other anyway.

However, most of the men in their close circle of friends and colleagues are pairing off and settling down. God has Day, Ro has Johnson, and their Sergeant Syn has Furious.

For the past several years, Ruxs has only sought out the advice and company of one person, his partner and best friend Green, and vice versa. Both of these alpha males are presumed straight, but neither can deny the heat that's building in their once 'just friends' relationship. 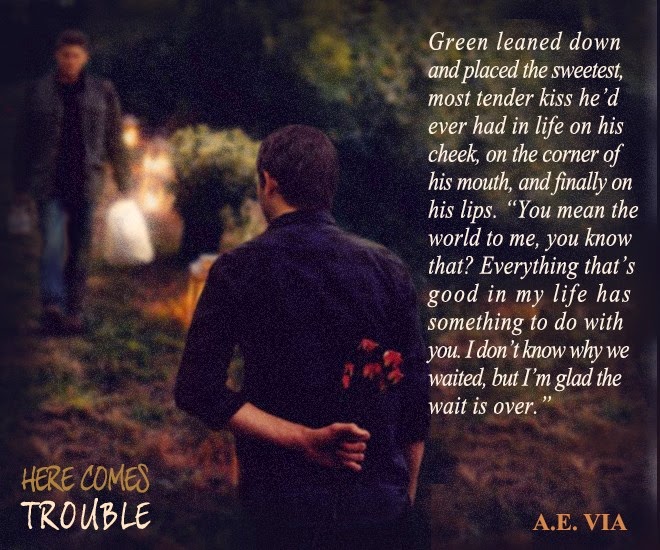 Excerpt
Green pushed hard, dislodging Ruxs from his back. He looked over his shoulder, and did a double-take at the clear look of lust shining in those light green eyes. Jesus Christ. He jammed the key into the lock and hurried inside. He let Ruxs stumble his way in on his own. Tossing the keys in the dish on the table, he moved further into the loft, flicking on the lights as he went. He was in the kitchen pulling out the carton of orange juice when he heard the light switch flick again, putting him back into darkness. The street lights shone through the large windows, casting shadows all over the place. He turned the carton up to his mouth, figuring that Ruxs had hit the light by habit and was already in his room, probably face down on his bed.

Green shoved the juice back in the fridge and closed the door. He turned around and ran into a brick wall. Ruxs’ chest. He was standing directly behind him, quieter than a mouse in a room full of cats.

“Fuck! Ruxs, what the hell are you doing?” Green barked. Looking directly into Ruxs’ heavy-lidded eyes.

Ruxs didn’t say a word. He didn’t smile. He didn’t laugh it off or say it was an accident. He just stared him down.

“What. Are. You. Doing?” Green said with more irritation in his voice.

Ruxs took a couple steps forward and Green instinctually moved back. The refrigerator was at his back and Ruxs’ arms slowly came up and caged him in. Their faces were only inches apart. Damn he was acting so weird. But Green was going to let him play out his little game so they could go to bed.

“Something on your mind,” Green said through clenched teeth.

“Actually, yeah.” Ruxs finally grinned and Green got the confirmation that it was just Ruxs being his usual asshole-ish self. “Why do you think so many men are gay?”

Green resisted the urge to put Ruxs on his ass. “Are you shittin’ me right now?”

“No. Really. I was just wondering that.”

“Oh. You were just wondering that?” Green gave him a bullshit look.

“Yeah. I mean we work around all these big motherfuckers that are head-over-heels in love with other men. God and Day. Syn and Furi. Ro and Johnson. All these badass men. Queer as a three-dollar bill. Highly respected.” Ruxs leaned in closer and whispered softly, “In fucking love. Why is that? What’s so great about it?”

Green gritted his teeth. “When you see God tomorrow, why don’t you ask him? I’m sure he’d love to give you the answer. Just make sure I’m there. I’d hate to miss that.”

“Why are you mocking me?” Ruxs growled low and Green stood up straighter.

“I’m not mocking you. But you’re being ridiculous and I’m tired. Now move.” Green knocked Ruxs’ hands down and shoved him back with his own chest. They were the same height, same build. Evenly matched. Ruxs dug his heels in and stopped them. Ruxs put his heavy hands on Green’s shoulders and begin to squeeze them. Green sighed heavily, wondering when this madness was going to be over.

“You’re so damn wound up. You want a massage?” Ruxs asked nonchalantly like he was offering Green a piece of gum.

Weirdly enough, massages were pretty common. Ruxs rubbed Green’s shoulders all the time. Sometimes he had to rub cramps out of Ruxs’ calves after they worked out. After a good sparring match, Ruxs usually ended up working the kinks out of Green’s lower back. But neither one of them were in any pain right now. Except Ruxs being an annoying pain in his ass. He was exhausted and they had to be to work early.

“No. I don’t want a damn massage, Ruxs. It’s after fuckin’ midnight, get your damn hands off me.” Green knocked those very talented hands off his shoulders and maneuvered around his partner. Thank God, this time Ruxs let him go. 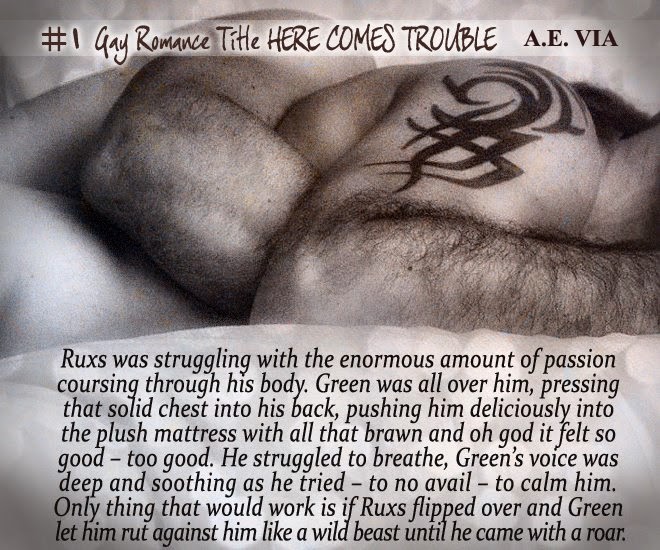 So, it's no secret that I absolutely love God and Day, their book Nothing Special started off this series. They had that instant connection that pretty much shoots them to the favorite character list. Add in the character traits for both, sexy alphas with serious humor, and they are pretty damn near perfect. Well, I have to say that Ruxs and Green are tied with them as my favorite A.E. Via written couple.

These two literally start off their story with a bang in the form of a chase, destruction of property, hitting a transit bus, and more destruction of property. It just gets better when they get back to the cop shop and God and Day give them a lecture about their behavior. And you know if God yells at you, damn it, you'd better listen or you'll be riding a desk. These two have always reminded me of the comic relief team. They're serious as hell about what they're doing, they are just a little off key and irreverently going about their way of doing it.

There is something so hot about these two being clueless that the other is totally attracted to them. While they kind of consider themselves not gay and more open to life, they are immensely attracted to each other. And that massage that Greene gives Ruxs...how the HELL did Ruxs not realize that Greene was turned on too? And how did Greene not realize that Ruxs was like two seconds away from coming from Greene giving him a massage?

There are a few bumps and bruises along the way to their HEA, but all in all Greene and Ruxs just fit perfectly together. Add in Curtis and they're freaking adorable as a family unit. I really enjoyed the moments with these three spending time together. Curtis's reaction to their relationship is classic teenager and cute as hell.

Here Comes Trouble is a solid entry in the Nothing Special series, with solid main characters, a little bit of angst, and a lot of familiar previous characters. The relationship with Ruxs and Greene moves pretty quickly but since they already spend 24/7 with each other that's not a surprise. Curtis and Genesis, now THAT is a surprise, and one that I'm very very excited for in the future.

I highly recommend this book and this series for those that love hot, alpha males with adorkably cute inner dialogues, and that love fiercely the ones that they consider theirs. I look forward to any new additions in this series.

A.E. Via is still a fairly new author in the beautiful gay erotic genre. Her writing embodies everything from spicy to scandalous. Her stories often include intriguing edges and twists that take readers to new, thought-provoking depths.
When she’s not clicking away at her laptop, she devotes herself to her family—a husband and four children, her two pets, a Maltese dog and her white Siamese cat, ELynn, named after the late, great gay romance author E. Lynn Harris.
While this is only her sixth novel, she has plenty more to come. So stalk her – she loves that - because the male on male action is just heating up!
Go to A.E. Via’s official website http://authoraevia.com for more detailed information on how to contact her, follow her, or a sneak peak on upcoming work, free reads, and where she’ll appear next. 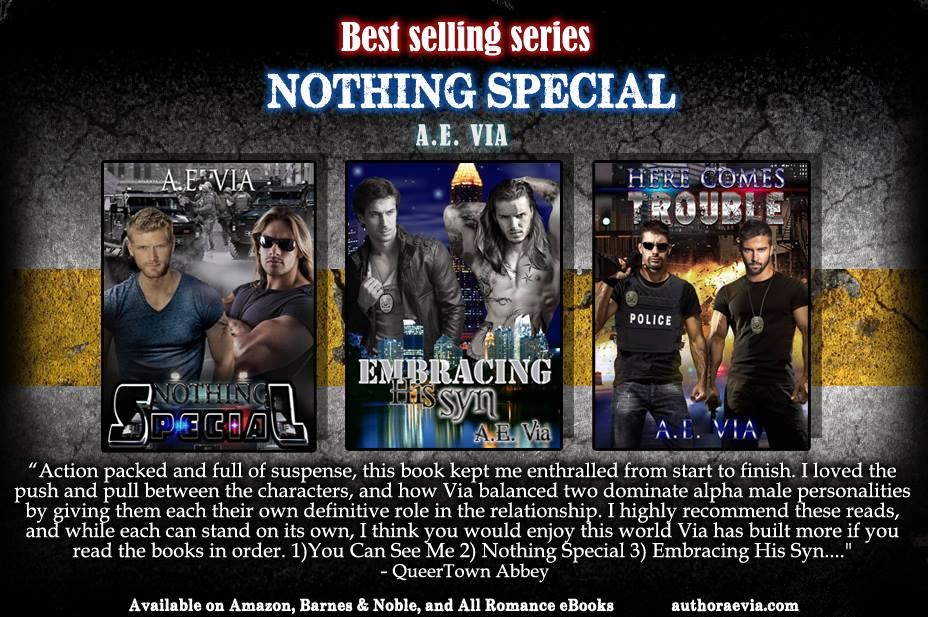