Out of CTRL by SA Welsh - Blog Tour with EXCLUSIVE Excerpt 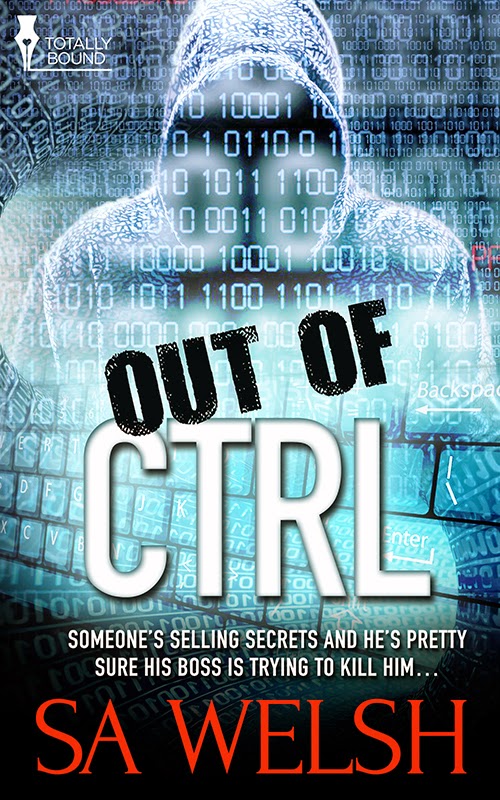 Andrew had no intention of ever going back home. But circumstances force him to face his painful past and the friend who betrayed him. Andrew Finley has no intention of going back to his hometown—ever. After he’s caught hacking into the CIA, he builds himself a new life as a computer guy for the very government agency he hacked. But over the past few months, something has been bothering him, and his boss is acting more paranoid than usual. Every time an operation fails, Andrew collects information that could prove someone is selling secrets. Now he’s pretty sure his boss is trying to kill him, so he has no choice but to go back home to buy some time. Home may be more dangerous than facing his boss. Nine years ago, his former best friend and first crush Teddy betrayed him, and let his evil sister and her minions send him running. But he’s back now and not everything is as clear-cut as he thought. Teddy may not be a Judas but can Andrew catch his fireman without getting burned, or is coming home going to kill him? One corrupt boss, one evil sister, enough family drama to fill a dozen daytime chat shows and an ex-best friend whom he’s been in love with for half his life makes for one hell of an interesting trip home.

Excerpt
A black car with dark windows and out-of-state plates pulled up next to them on Andrew’s side. His phone beeped again. The message said to stay in the car until Christopher knocked on the window.
Teddy hadn’t moved his position and was looking at something over Andrew’s head, so Andrew guessed Teddy could see what Agent Hammer was doing.
“There’s another guy with him and they’re doing a perimeter check by the looks of it with strange binoculars. Infrared goggles maybe?”
“Cool.” Andrew had always wanted to take a closer look at a kit like that. Maybe he could manufacture his own scanner and incorporate it into his phone somehow. He fiddled with his glasses as he started plotting out the device he had in mind.
“Yes, I suppose if you think searching for a rogue CIA agent who wants to kill you is cool,” Teddy responded with an expression that clearly stated he was humoring Andrew.
Before he could think of any kind of comeback, someone knocked on his window. “It’s all clear, Mr Finley. We need you to get in the car right now.” He didn’t recognize the voice so it must have been the other man Teddy had said was there.
Andrew looked at Teddy to see what his reaction was but Teddy kept his face calm, hiding whatever he was thinking.
“Andrew we need to go now.” This time it was Agent Hammer who rapped on the window and called to him.
“Coming!” He gave one last look at Teddy and sighed in relief when Teddy gave a nod and motioned for him to get out of the truck. If Teddy needed to be in charge that was fine with Andrew—as long as Teddy was here.


The second his feet touched the ground, as he gingerly slid out of the truck, the man that wasn’t Agent Hammer grabbed him by the shoulders and yanked him over to the car.

I'm SA Welsh and I write because the voices in my head keep making me. I love reading and I love letting the characters and stories in my head come to life in a book. I can't function in the morning without a cup of tea and when I'm not writing I'm reading. I have enough books to last me through an apocalypse but don’t ask me to share them unless you are a fellow book worm and know how to treat and appreciate a good book. It is thanks to the writers that inspired me to put myself out there that I became an author and the editors that make sense of my chaos that I keep writing. You can find me on facebook or on my website www.sawelsh.com 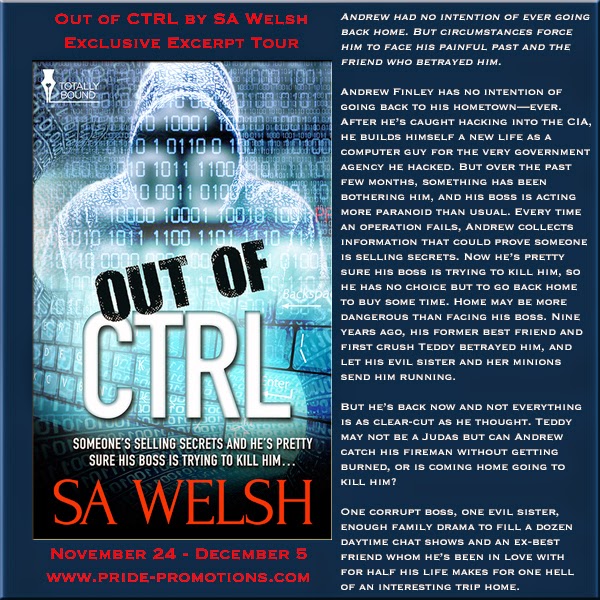 Rafflecopter Prize: E-copy of ‘Out of CTRL’