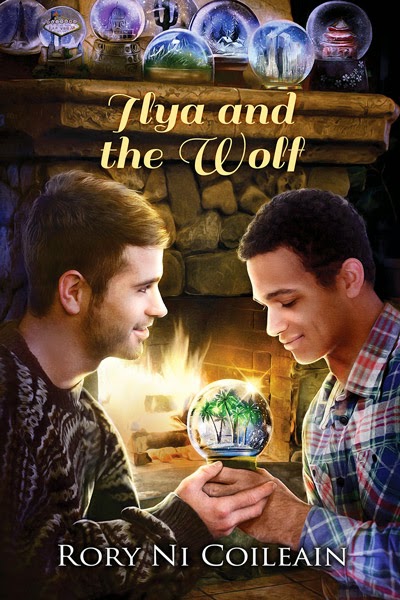 Book Name: Ilya and the Wolf

Ilya, the youngest son of a Moscow oligarch, is so deep in the closet he’d find Narnia if that weren’t a decadent Western story. On Christmas Eve, his brothers lure him into the forest, intending to murder him and erase the shame he inflicts on their family by existing. However, the attempt is interrupted by Volyk, a wolf who carries the blood of the ancient oboroten’ —shapeshifters. Ilya never imagined a Christmas gift like the handsome wolf, but accepting what Volyk offers will have consequences that change both of their lives forever.

lya is so deep in the closet he’d find Narnia if that weren’t a decadent Western story. Volyk, a wolf who carries the blood of the ancient oboroten’, shapeshifters, longs to show him the way out, but if Ilya follows the wolf, two lives will change forever.

And the angel said unto them, be not afraid...

Ilya was not afraid. Enraptured, yes. Entranced. But not afraid. He had been ready for death when he closed his eyes in the wolf’s embrace. Instead, he was whole, and awake, and in the arms of a man more handsome than any angel. Volyk’s long thick hair was the brown and gray of the wolf’s pelt, his cheekbones angular, his lips full. And his eyes were the same beautiful fiery amber as the wolf’s.

Maybe he had only dreamed the wolf. Or maybe he was still dreaming. Surely he had done nothing in his life to earn the gift this moment would be if it were real. 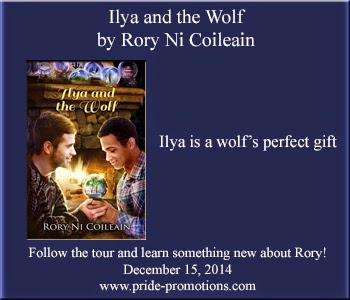 Rory Ni Coileain majored in creative writing, back when Respectable Colleges didn't offer such a major, so she designed it herself - being careful to ensure that she never had to take a class before nine in the morning or take a Hemingway survey course. She graduated Phi Beta Kappa at the age of nineteen, sent off her first short story to an anthology being assembled by an author she idolized, got shot down in flames, and found other things to do, such as nightclub singing, for the next thirty years or so, until her stories started whispering to her. Now she's a lawyer, a legal editor, an Irish dance teacher, the mother of a teenaged son, and amanuensis to a host of fantastic creatures who are all anxious to tell their stories.

Where can you find the author?

Rafflecopter Prize: E-copy of Ilya and the Wolf