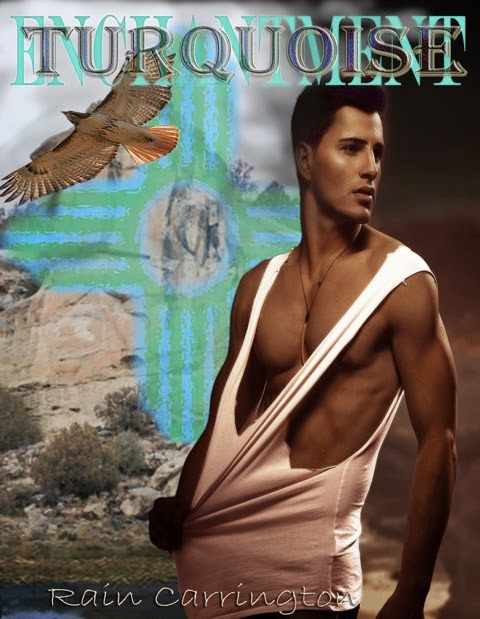 In the mountains of New Mexico lives a group of boys who are inseparable. That is until they grow up and one of them leaves the rez to fulfill his dream.
One of the boys misses him more than the others. A love that started as children grew with him and when Angel Quintana left New Mexico, Garcia Blacksnake had to occupy his time until the love of his life returned. Angel came back when tragedy struck, with secrets he does not want this old friends to know. Secrets about the life he lived as his dreams came true, turning to nightmares he could not run away from.
Can childhood friends help save him from a sadistic man who holds Angel’s dream in his hand? Can Garcia’s love help him to trust himself and others again? 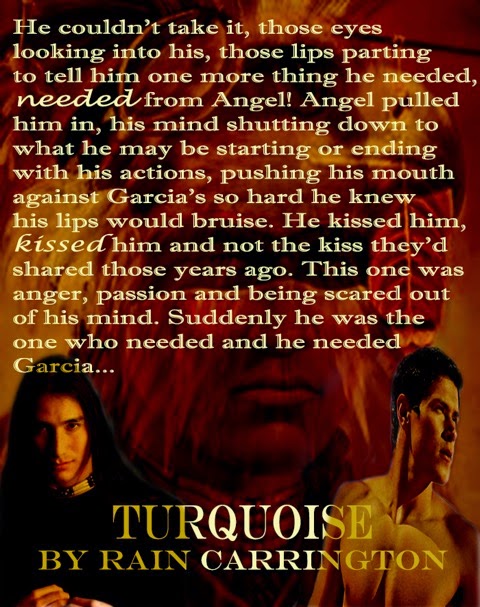 Excerpt:
“Cool. Let me put it on you.” He took the cross back and moved Garcia’s hair from his left ear, where his older brother, Kevin, had pierced the lobe with a sewing needle a year before. After he slipped the hook into Garcia’s hole, he stopped to admire it for a second. Garcia turned his face a little, and before Angel knew what was happening, their lips were touching.
Neither moved, their breathing getting quick as they waited for the other to jump away, but neither did. Garcia smelled so good, his lips were so soft, Angel found himself moving his hands to Garcia’s long, thin face.
Garcia pushed his lips harder against Angel’s and Angel felt his friend shaking. Holding his face tighter, Angel kissed him harder, moving his lips a little like he’d seen on television. When he pulled back he saw the cross catch the sunlight and he was brought from his daze for a second before he smiled.
“Angel?”
“What, Garcia?”
“Promise you’ll never leave me behind, okay?”
Angel knew he couldn’t make that promise, but he touched the earring and swore, “As long as you have this we’ll never be apart. Not really. Okay?”
Garcia looked down and said, “Okay.” He sat quiet again, then said, “Angel, I won’t tell anybody, okay?”
“Okay.” He started to get up and added, “But it can’t happen again. Not only are we guys, but now we’re family.”
Garcia grinned and got up with him, while he was collecting his shirt and tie and getting them back on. “I thought you said we aren’t?”
“Shut up, Garcia!” 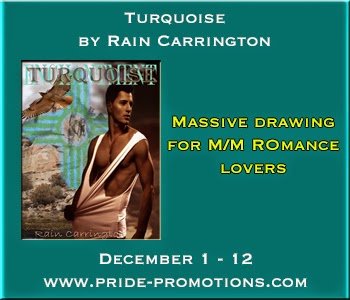 Rain Carrington started writing when she was just a teenager in Trinidad, Colorado but didn’t start writing M/M romance until much later. Through the years many of her gay male friends told stories of heartache and the struggle to find “the one” so she told them stories, fantasies all about them and their future cowboy, fireman, biker or policeman. When she found a writing site that encouraged her to write them down she started what was an adventure like she never had before.
Her first story, Cabin fever, about a young man searching for love and finding it wrapped in a member of a mafia family gained her readers who cheered for more. She knew then that she had found her place in the world. To make stories of love and kink that not only her readers but she could get lost in as well.
Rain now lives in Colorado Springs, Colorado but has traveled most of the US. Her last road trip to San Francisco gave her characters still coming out…no pun intended…in her newer stories. Rain has severe scoliosis which makes it hard for her to do all the things she used to love but it did give her the time to write that she never had before. She fights for lgbt rights from her home as best she can now and keeps in close contact with her friends that fight on two good legs to point them where they should go. She is a fervent believer that one door never closes without another opening so there are no limits she can’t get past.
Of all the people in the world no one has encouraged and supported her like her friends, many of them writers themselves, and her family. There is never a dull moment in her home where laughter is in the air 24/7 and everyone knows to avoid the computer screen when she sits in front of it. They never know what kind of beautiful man love they may see. Rain calls it research, they call it, “there she goes again!”

4-Dec
Amanda C. Stone
Up All Night, Read All Day

Anne Tenino - one ebook copy of Billionaire With Benefits

Jamie Lynn Miller - one ebook of Burnin' For You