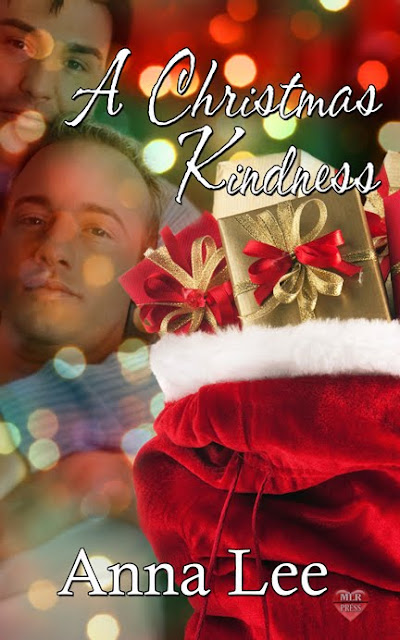 David Winters fell for a man at a Christmas masquerade party last year. The only problem? His sister and his niece needed him so instead of pursuing anything, David ran away and didn’t find out who he was. Now, his niece, Jenna wants to organize a toy charity drive at a children’s hospital which leads David to reunite with Officer Stephen Lauer. The sparks fly again and with a little Christmas kindness maybe the two of them can make a few wishes come true… including their own.

Debating whether or not he would go to the Christmas masquerade party again this year, David stared at the message on his phone from his friend, Chad. Last year’s party had been amazing, for one reason. A gorgeous man who’d gone by the name of Steve. They’d hooked up, spent the night together, and then parted ways. A regret that surfaced once again. There’d been something about the other man, though it’d only been sex and a brief conversation, it was a lingering feeling that he should’ve taken a chance and found out who the other man really was. If only he hadn’t been a coward, if his life hadn’t been so complicated, maybe he’d actually have someone to share Christmas with this year. He texted Chad back that he’d go, maybe he’d find Steve again. He wouldn’t make the same mistake and run away this time.

“Uncle David,” Jenna said, sitting next to him on the sofa squeezed into the tiny living room of his sister’s apartment, “can you help me?”

David turned toward his eleven-year-old niece. Her hazel eyes were expectant and she gave him that look which pretty much guaranteed he’d do whatever she planned on asking. He saw that she had a journal in her hands with the Harry Potter Gryffindor crest on it. Ah, he remembered getting that for her. Money was tight for his sister—she was barely making ends meet—so David had been indulging Jenna as of late so she wouldn’t know. “Of course, with what?”

“It’s almost Christmas. And I want to do something to help. I heard about Toys for Tots on TV and I wanted to do something like that. You remember how my friend, Meredith, got sick, right?”

“Of course I do.” Meredith had spent the last few Christmases in the hospital fighting leukemia. After two years, she was finally in remission, thank God. She and Jenna were good friends and inseparable. Jenna had even cut all her long locks and donated them so Meredith could have a wig made. She hadn’t wanted her friend to feel bad about herself and she’d said that way they could be like twins. His niece truly had a heart of gold and David loved her more than anything.

“Well, at school today she said it’s really hard for parents to get gifts because they’re so busy taking care of their sick kids in the hospital. And sometimes they can’t afford new toys. I thought we could organize a toy drive this year. Meredith wants to help too. We could take all the toys to the hospital and give them out on Christmas Eve next week. I know Mom can arrange stuff. I want to tell her as soon as she gets home.” She showed him the plans she had written. Then gave him a bright smile. “What do you think?”

David hugged her tightly and kissed the top of her head, smoothing down her curly brown hair. “I think we’d better get started.”

She let out a cry of excitement and hugged him back. “Thank you, Uncle David!”

David took Jenna to Target and they bought all the supplies they’d need to make flyers for the toy drive. Jenna picked out Christmas stickers, green and red markers, and a few other odds and ends. They went back home and while David started dinner, Jenna set up their workstation at the old oak kitchen table. While the chicken was cooking, he helped Jenna design the flyers.

Awhile later a key clicked in the lock and Jenna jumped up as soon as Caitlyn walked through the door. She hugged her mom. “Hi, Mom!”

“How was work, Caty?” David asked her as she seemed tired.

Caitlyn ran a hand through her messy ponytail. “Long. I swear I ran back and forth at least twenty times for a new patient.”

David’s sister, Caitlyn, was a nurse at the hospital. She worked the day shift and David watched Jenna after school until she got home. He walked over and gave his sister a kiss on the forehead. For a second, the happy mask she always wore in front of Jenna slipped. Right then, David really hated her ex-husband, Bruce. Even after a year, his sister was still suffering, still lost. Her bastard of an ex had cheated and then left Caitlyn and Jenna just before Christmas last year. No matter how much he helped Jenna with her homework, made her dinner, took her to dance class, and softball, Caitlyn still seemed depressed and was struggling. He knew she appreciated everything he did. He just wished he could do more. He was so worried about her. They only lived about ten minutes from his apartment but he didn’t see much of it, between work and spending time here, keeping an eye on his family and making sure they got through this.

Before he could say anything, Jenna told Caitlyn, “Mom, I’ve got a great idea.”

“What’s that, honey?” Caitlyn asked as Jenna went with her to the kitchen. She toed off her shoes with a heavy sigh and smiled at David as he popped her dinner in the microwave. “Thanks, Davy.” David shook his head. He disliked his nickname as much as Caitlyn did hers, yet they both fondly used them. No one else was allowed to though.

Jenna excitedly told her mom about the toy drive. “And look!” She dashed to the table and grabbed a flyer that they had made to hand out. David figured he could leave some at work, maybe drop by the police and fire stations, and a little social media wouldn’t hurt either. He could probably even run something in the paper if he got the okay from his executive editor. He was certain she would be willing. It would be a feel-good piece; those always did well. Plus, it was nice to have stories that showed the goodness still in the world, despite how depressing it sometimes seemed.

“Me and Uncle David made these.”

Caitlyn took the flyer. “Wow, this is incredible, Jen.” She seemed as proud of her daughter for thinking of it as David was. “I’ll talk with some of the doctors and the head of pediatrics tomorrow, see what we need to do to make this happen, okay?”

Caitlyn gave David a fond look, her hazel eyes so much like his own, except faded, making her appear older than she was. Only three years older than him at thirty-five, she really was too young to be so worn out. “I think that goes to Uncle David for helping you with this.”

“Nah.” David shook his head. “Jenna did all the planning. I’m just the assistant.”

Caitlyn laughed. “Well now you have two of us, Jen. What’s the next step?”

“Gathering up the toys. We’re gonna pass out flyers tomorrow.”

“Mom, do you want to watch a movie?” Jenna asked.

“Yeah, let’s continue our Harry Potter marathon,” Caitlyn told her, grabbing a fork and her plate.

“I’ve got work to do, sweetie.” He hugged her. “I’m going to head home and let you and Mom have some fun together, okay?”

“Love you too.” David smiled as Jenna ran off to start the movie then he embraced his sister. “And you. Have a good night. Call if you need anything, Caty.”

“I will, Davy.” Caitlyn gently pushed him away then said quietly, “Go on, we’ll be fine. I know you worry but it’s okay. Jenna just reminded me of something.”

Caitlyn’s face lit up. “That I may still be hurting, but I’ve got a good life. I’ve got a beautiful little girl and you. And it’s almost Christmas. I’m done being sad. You want to help me decorate and have some fun this weekend? We could go out, maybe drinks.”

“Count me in.” David found his keys and left the apartment after more good-byes. It was chilly outside, a light snow falling. He was glad he’d brought his car. Sometimes he stayed late and while the neighborhood was decent, David had seen one too many crime shows to walk alone in the dark. No, he’d much rather crank up the heat in his car and listen to loud classic rock as he made the short trip home.

He realized that the party Chad had invited him to was this weekend and cursed. Caitlyn hadn’t asked him to do anything in a long time—he couldn’t cancel on her now. Then he had an idea. Maybe she’d go with him. She wanted to do something fun and it would be a good time. A way to forget everything for a while. And Jenna could sleepover at Meredith’s. It could all be worked out if he just got his sister to agree to it. He went into his apartment, showered, slipped on sleep pants, and then tumbled into bed with a hopeful smile. Maybe he’d get a second chance with Steve, that’s all he really wanted this Christmas.

Anna Lee graduated from the University of California Riverside with a Bachelor’s Degree in Creative Writing. Living with a disability, she has overcome many challenges and puts her passion for life and love into her writing. She lives with her family and dogs and enjoys writing late into the night. When she isn’t writing, Anna enjoys spending time with her nieces and nephew or chatting with her friends about her favorite books and TV shows. 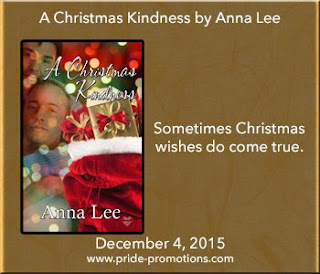 Rafflecopter Prize: E-copy of 'A Christmas Kindness' by Anna Lee
a Rafflecopter giveaway
Posted by Wicked Faerie's Tales and Reviews at 12/04/2015 07:00:00 AM