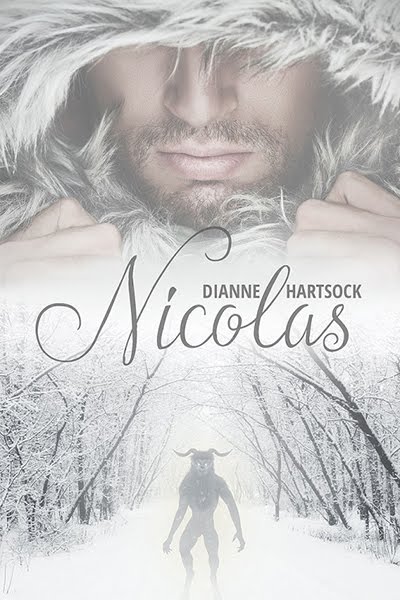 Betrayed by a lover, Jamie rents an isolated cabin on Lake Huron, wanting only to be left alone. Instead, he is pulled from his solitary existence as an artist and tumbles headlong into the legend of Saint Nicolas.
As a young man, Nicolas accidentally killed a man intent on murdering three children, only to have the man's malicious spirit rise up against him. Fleeing through the centuries from the Krampus, the evil troll-like creature that dogs his steps, Nico finds refuge with the young artist who takes him into his home and bed. But Jamie has questions. Who is Nicolas, and why does the Krampus want to destroy him?
When the Krampus begins to torment and torture anyone Nico comes in contact with to punish him, Jamie’s life is put in danger. And Jamie isn’t sure whether he can help Nico defeat his nemesis or if he’s merely a pawn in the Krampus’s game.

He had trouble breathing, the crushing weight on his chest seeming to have followed him up from his dreams. But that couldn’t be right. He’d rented the cabin for its isolation. No one should be there. Did he still dream?

A warm breath brushed against his cheek, sending a shiver of dread and strange anticipation through him. “Easy, baby,” a silky voice whispered in the darkness. Sharp teeth nipped his earlobe and pleasure and pain sparked along his nerves. His eyes adjusted to the moonlight filtering through the sheer curtains, and he stared in amazement at the man gazing at him with wild green eyes, long pale hair, high cheekbones and a slender neck he craved to run his tongue along.

The stranger laid his weight on him, driving the air from his lungs and making Jamie struggle for every breath. Shifting position, the man sealed his full lips over Jamie’s, drawing a long groan from Jamie when an impossibly large cock slid against his. In sudden panic he reached to shove his unknown visitor away and touched hot skin and lean muscles. Of their own volition his hands roamed lower, following the curve of the stranger’s back to the rounded swell of his ass. He drew a quick breath and the man laughed into his mouth, pushed his tongue deep, thrusting inside to match the movement of his hips as he ground against Jamie’s aching dick.

Heat pooled in Jamie’s stomach. God, what was happening? The thing in his bed looked like a man, but his every instinct shouted otherwise. His skin was warm when it should have been cold from being outside. And how had he gotten in? All the windows and doors were locked tight against the winter storm. It was as if he’d just materialized in Jamie’s bed. “Who—”

He cried out when a hand pushed between them and grabbed their cocks, stroking them together until he lost the ability to think. So close! He grabbed onto the man’s firm ass and yanked him tighter against him, rising up to shove into his strong grip.

The triumphant hiss in his ear shot ice through his veins. “So naughty.”

“No!” Jamie struggled to sit up, scrambling back against the headboard. He blinked, finding himself alone in the room, only his ragged breaths disturbing the silence of the cabin. A forgotten anxiety knotted his stomach. Naughty. He hated that word, tossed about by the boys he once knew in school. The ones he’d suck off behind the gym, desperate for a gentle hand in his hair, balm against his loneliness. He’d been terrified his parents would find out he was different, that he liked girl things and found boys much more exciting than he should. They would know he was gay and there would be hell to pay for their freak of a son.

He scrubbed a hand over his face. God, that had been ages ago. The last shreds of the dream dissipated, and he reached for the bedside light, fumbling in the darkness for the switch. Low light stung his eyes and he blinked at the empty bedroom, unable to believe the attack hadn’t been real.

He flung off the heavy quilts and slid to his feet, clinging to the post at the foot of the bed as a wave of dizziness struck him. Laughter from the other room jolted him. Heart pounding, he bolted for the door and it crashed into the wall as he flung it open. The reddish glow from the banked fire on the hearth lit the main room of the cabin, though the kitchen area remained in shadows.

Jamie’s gaze swept the rooms, focusing on the dark corners.  No one jumped out at him. Nobody sat on the couch. His coffee cup remained undisturbed where he’d left it on the hearth. Of course. The cabin was isolated, miles from the nearest neighbor. Who would bother to come way out there, especially with the threat of another snowstorm on the way?

He ran a trembling hand through his hair, pushing the sweat-drenched bangs from his forehead. Christ, the dream had seemed so real. The cold of the great room finally registered, creeping up from the hardwood flooring. Shaking, he crossed to the fireplace and stirred up the coals, adding another log.

With a sigh, he sank into the cushions of the worn couch and pulled the woolen afghan around his bare shoulders. The log caught and the fire crackled, sparks dancing up the flue. Recalling his dream and the hard body against his, he shrugged when his cock perked up.

“It’s been a while,” he acknowledged, watching the flames lick at the oak log. He’d signed a year’s lease on the cabin, right after catching his boyfriend in the stairwell of their apartment building, making out with their neighbor. It hadn’t been the first time, either, though again Patrick had his apologies ready. That had been over six months ago, and since the cabin stood miles over rough terrain from the nearest town, he’d rarely seen another human being in all that time.

“Just the way I like it,” he told the indifferent fire burning its way through the wood. But the stranger’s lips in his dream had been soft, his thrusting tongue sweet in Jamie’s mouth. He hadn’t liked the violent aspect of the dream, but if that had been a lover in his bed? His dick pressed against his thigh, and Jamie reached under the heavy blanket, moaning when he took its heavy weight in his hand. Drawing lazy circles on his balls, he let the pleasure build slowly, lifting his cock while in his mind the stranger licked the glistening head, his pale gold hair a curtain of silk against Jamie’s sensitive skin. He moaned as the man slid his tongue down the thick vein on the underside of his cock.

His mind flitted over the question of whether the guy would fuck him or want it the other way around. Didn’t matter to him. He liked it both ways. Rolling to his back, Jamie continued to stroke himself while he tugged his tight balls, then pressed a finger against his hole. He remembered the lube in the nightstand drawer by the bed, but he wasn’t about to stop, and hissed when he pushed the finger inside. The man’s cock had been huge in his dream. What would it feel like as it stretched him open? Would it be enough to fill all the empty spaces inside him?

It was a moment before the tolling of a bell outside the cabin registered. What the fuck? Jamie sat up, trying to hear past the pounding of his pulse in his ears. His cock throbbed and he groaned in frustration, knowing he couldn’t chase his pleasure until he found out what was going on at the dock. The only one to boat in was the man who dropped off his monthly supplies, and he’d been and gone two days ago. Who else would be using the dock? Jamie had been isolated for months without anything disturbing his peace. But this night he’d had a wildly erotic dream and now this. What made tonight so special?

Happy Holidays! Thank you for having me here Wicked Faerie’s Tales and Reviews. As a writer, I’ve been asked a lot of interesting question, and this last one is no exception. Do I have any strange writing habits?

My first reaction is to say no. I make a pot of coffee and sit down and write. But the more I thought about it, I had to change my answer to a hesitant yes. When I get wrapped up in a scene, heart racing, blood pounding in my ears, living the moment with my character, I often have to walk away from the computer. Take a break. I’ll wander the house, sometimes even finding something to clean. Agitated and excited.

I swear, sometimes writing a scene can feel like giving birth. Yes, I have two children, so I know what that’s like. But it takes all my effort and concentration to find the exact words, timing, everything, to convey exactly what I’m trying to in that particular moment in a book. I feel restless and unsettled and need to walk off some of that turmoil before I can sit down and try to finish the scene.

I had many moments like that while writing NICOLAS. The Krampus never could behave himself and would never be forced into a scene the way I wanted him. My house has never been so clean! But we finally came to an understanding. I would let him wander the page however he liked, as long as he ended up where I needed him to be at the time he should be there.

We agreed. I met all of my deadlines. And NICOLAS has come into being. 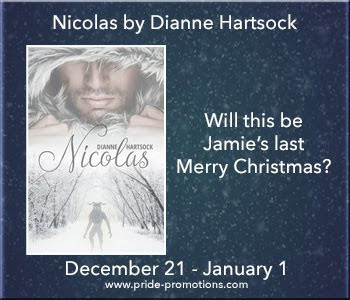 23-Dec: Happily Ever Chapter, Elisa - My Reviews and Ramblings, Mikky's World of Books