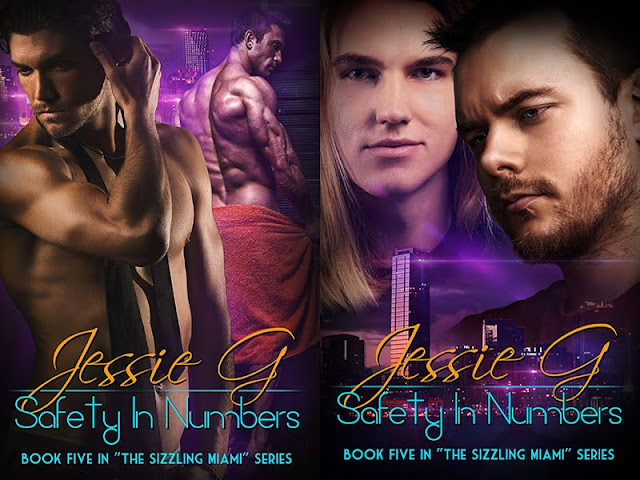 “Bros stick together no matter what.”

When Chris and Liam made that promise, they had no idea how important it would become or how it would be tested in the most brutal way. Nine years later, their bond cemented in blood, that relationship is all they have to hold on to.

“No matter what happens, this friendship will be the one constant we can count on.”

When Billy and Owen made that promise, they knew exactly how dangerous the world could be. They survived prison by protecting each other and they survived freedom by holding that promise sacred. Now they want more than just to survive and they want it from the brothers whose bond is as strong as their own.

“We are stronger together than we’ll ever be apart.”

When Owen reaches his breaking point, Chris jumps at the chance to make things right for all of them. With the future in their grasp, will they realize their strength is in their numbers and finally become the family they crave?

Author’s Note: This is NOT a foursome, but the story of two couples that needed to be told together. 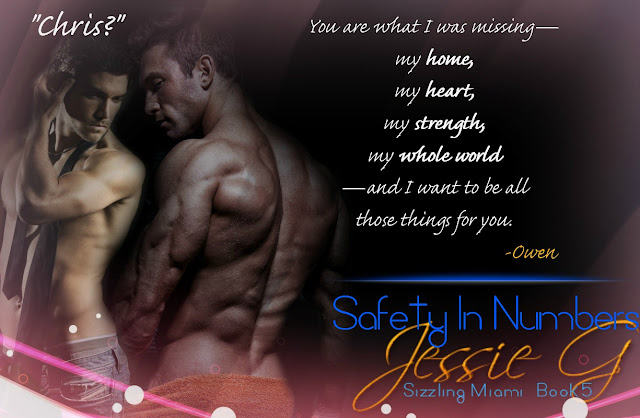 That silence hid a lot from their friends, but Liam knew Chris was plagued with memories far worse than his. That’s why they decided not to celebrate alone this year. Billy and Owen were expected any minute and it was the first time they invited anyone to join them. The anniversary was bittersweet for them and they chose to celebrate it because becoming brothers meant that much to them. “Do you think they’ll find it stupid?”
Chris just shrugged as if it was no skin off his back what they thought and Liam knew that was just bravado. Fact was, they both very much cared what the two men thought. “Liar.”
His brother sighed and dropped his head back. As if shit wasn’t fucked up enough, they fell for two bastards just as fucked up as they were. “I know you’re worried about Owen. The business with Colin is growing out of their control and I’m not sure why he thinks it’s a good thing. Is he trying to prove something? And the middle of the night phone calls from the FTR? He’s looking more and more fragile every day.”
Liam knew he wasn’t stating anything new. What he didn’t know was what Chris intended to do about it. Lately, when it came to Owen, Chris conveyed zero intent and seemed to be waiting for Owen to read him as effortlessly as Liam did. Their brother bond had been forged through blood and he was afraid Chris’s expectations of Owen were unreasonable. “Do you see his face every time he thinks he’s failed to understand you? The weight of it is crushing.”
Instead of regret, all Liam saw was anger in Chris. It wasn’t a common emotion for Chris and Liam could name every time he saw it. The fact that Chris knew what he was capable of if provoked had made him extremely conscious of that emotion and he often went to great lengths to contain it.
Owen was the very definition of insecure. Just the type to inspire Chris’s protective instincts, which Liam knew for a fact Owen did. Hell, he inspired Liam’s protective instincts. Owen was stubborn though and he often distanced himself, keeping things bottled up until they manifested elsewhere. Like in panic attacks that felt like heart attacks, which he also tried to hide. Liam nearly lost it when they found out that Billy was keeping Owen’s secret.
Chris nodded slowly, as if he completely followed Liam’s train of thought and waited for him to connect the dots. And just like that, Liam understood. “You’re pissed because he doesn’t come to you when the panic sets in. That he hides it from you and they hide it from us.”
It made total sense, but he had to wonder if they were expecting too much. After all, they couldn’t call what was going on with either man a relationship. No, they were four fucked up bastards trying to come together in some romantic—what? Not a foursome, eww…he loved Chris, but yeah, that just wasn’t happening. And Owen wasn’t his type any more than Billy was Chris’s type. But—always with the fucking buts, right?—what was happening was very definitely happening to the four of them, and Liam now had to wonder if that was the problem, because trying to come together was definitely not the same as being together.
Chris shook his head and shifted in his seat. No, he was right. It wasn’t just their brother bond that made it impossible to move forward as two separate couples. Billy and Owen had formed their own unique friendship in prison and were no more likely to move forward without the other one either. “Just once, couldn’t we have done something the easy way?”
The fire door banged open and Liam turned to see Billy and Owen, arms full of brightly wrapped packages, struggling to pull a huge cluster of balloons through the door. It was a shocking contrast to their dark thoughts and so uncharacteristically sweet of both men. Billy caught their surprised stare and yelled, “Is this where the party’s at?”
“It is now.” It might seem silly, but it was exactly what they needed and exactly who they needed it from. Maybe they hadn’t been expecting too much at all. Liam rose to give them a hand and glanced down to see the look of longing in Chris’s eyes and thought maybe it was time they all expected more.
Buy the book: 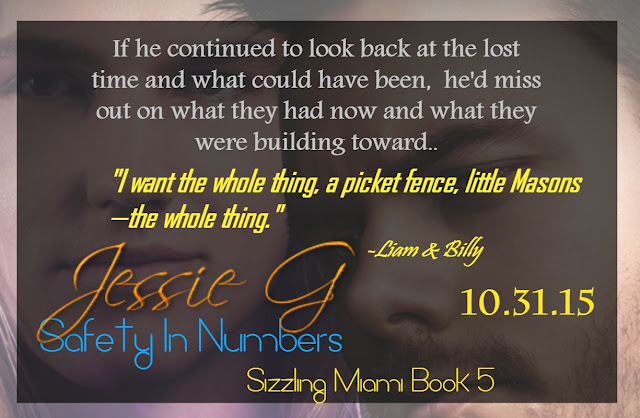 Q & A with author Jessie G

Today I’m very lucky to be interviewing Jessie G author of Safety in Numbers, book five in the Sizzling Miami series. Hi Jessie, thank you for agreeing to this interview.

1)      Is there a certain type of scene that’s harder for you to write than any others? Love? Action? Romance? Tragedy?

Hmm, I suppose sex scenes are the hardest because they require a certain mindset to put the emotion on the page. It’s one thing to go through the motions, but to back it up with all the feelings (the love, the passion, the pleasure, the pain, whatever it calls for) requires the author to feel those as well. Otherwise it’s just a how-to manual.

Plot, plot, plot. I love all books from the steamiest erotica to the sweetest contemporary, as long as they have a plot. Follow that up with interesting characters a reader can become invested in and tie up all the loose ends unless you know without question you’re writing a sequel.

All the time. They email me and find me on social media, and we have a little FB group that chats on and off all day. I get a lot of questions about what’s next for the series, or they tell me which stories/characters touched them the most, and occasionally I get someone who tells me I screwed with their favorite characters and how I should have done it different. All the feedback is welcome, because I love hearing how my stories are received—good and bad.

4)     How many books have you written? Which is your favorite?

Travel. I’ve rented all my adult life because I don’t like being trapped in one place. In the future, I imagine we’ll buy a house and an RV to have the best of a home base and freedom.

Like many readers, the dream of being a writer has been with me a long time. After three decades of trying, I'd begun to doubt. Thanks to social media, I followed my favorite authors hoping to glean some words of wisdom as I pounded out half-formed ideas with alarming regularity. Two repetitive themes emerged: to be a great writer you must read a lot and your butt must be in the chair every day like it's a job. The more you write, the easier it will be to write and the better you will be at writing. I took that advice to heart and write every day. With six published books to date, three series in the works and a full schedule of releases planned for the next two years, it's been amazing to have made this dream my reality.

I am a firm believer in marriage equality, love at first sight, power dynamics and happily ever after. I'm a lover of strong secondary characters and series filled with families, biological or chosen. All are themes you'll find throughout my books. 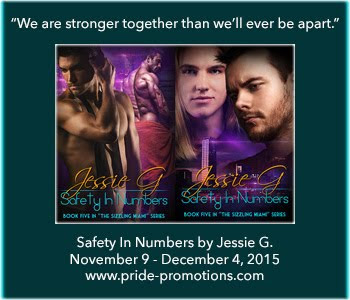 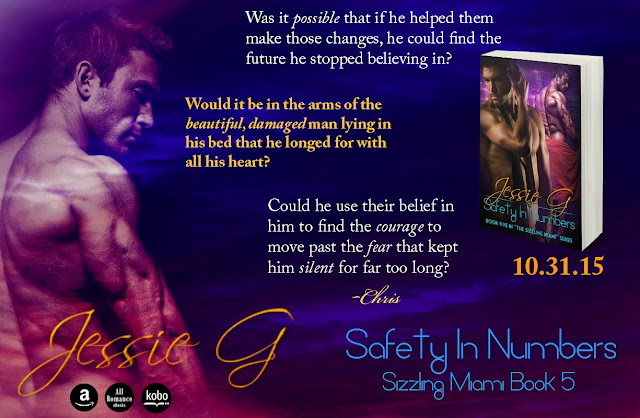 2-$25 ebook GC (Amazon, B&N, ARE, or KOBO) winner’s choice, as well as 2 signed paperbacks of Safety in Numbers