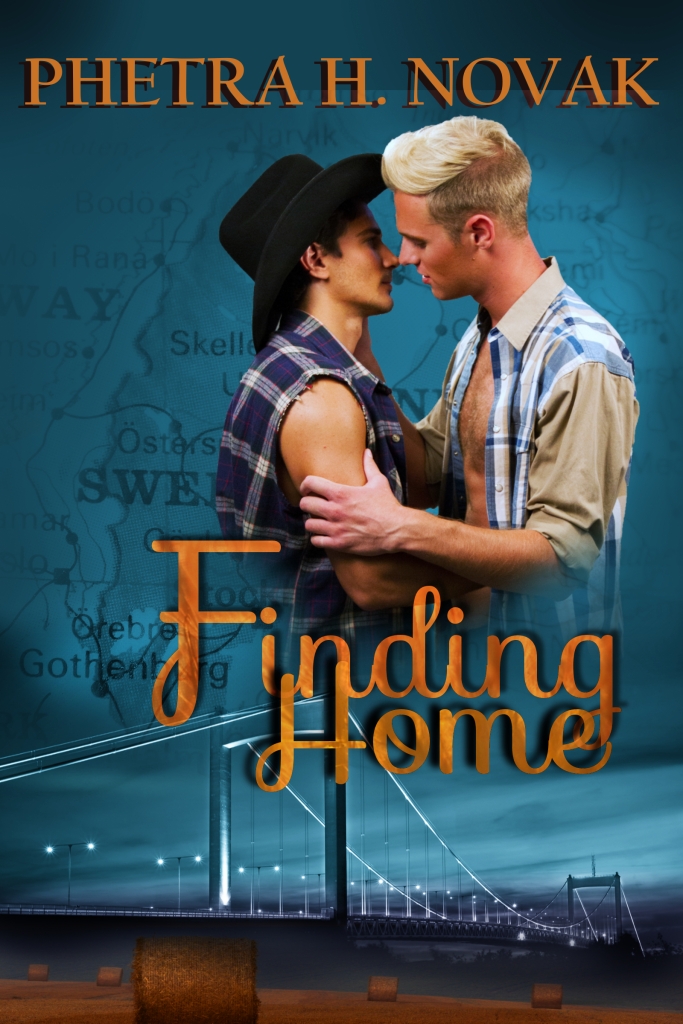 BLURB: Luca is a first year med student at the University of Gothenburg. He is following in his father’s footsteps, something he’d been programmed to do all his life. He lives a sheltered and still life, with no real friends. Luca would love to change that but doesn’t know how, since he always feels so odd around other people, like he doesn’t quite fit in. There’s so much inside him that wants out, like wanting to become a veterinarian more than a doctor. And the fact that he likes boys and not girls. But he doesn’t tell anyone about that—not even himself.

In comes Kai, an American cowboy in Gothenburg. He’s doing his thesis overseas to broaden his horizons before he does what he has always wanted to do, which is to go back home and run the family ranch. He just happens to see Luca one day leaving class and can’t stop watching the shy guy as he waded his way through the crowd with quick, silent steps, and his head down to avoid eye contact with anyone. For weeks Kai watches him from a distance, trying to figure out how to approach him.

Had he known that spilled coffee and slippery, awkward book bags would have gotten him close to the guy, he might have physically bumped into him a long time ago.

Finding Home is a book with star-crossed lovers meeting and the evil of the wicked witch in the west threatening to crush young love’s every dream!

The cabbie who’d pulled up was about the same age as his father, he was friendly and chatted a little as they drove toward Landvetter Airport. Kai felt like he’d filled in all correct answers on America and his visit to Sweden. The last part of the way they’d thankfully rode in silence and Kai's thoughts had gone to the unsent email. He knew once he’d gotten through check-in and customs, he’d have time to send the damn thing. He couldn't leave Sweden without having sent it.

He’d leaned his head against the cold window of the cab, closing his eyes and letting out a deep sigh. He’d felt so damn conflicted inside, he’d wanted to scream out loud and tell the world to stop spinning. One minute he was so sure he was doing the right thing and the next, he wasn't. As they’d come closer to the airport, the lump in his throat grew larger, and the tight feeling in his chest became so tight he’d felt as if he couldn't take another breath.

"Are you all right?" the cabbie had asked when they’d pulled up to the drop off zone. The man had a concerned frown on his face and a hand on his arm.

The man hadn't looked very convinced but he’d patted his arm as they got out of the car. Kai thanked him for his help and gave him a good tip. He wished Kai well and bon voyage. When Kai had turned to leave, the cabbie turned back to him and handed Kai a small medallion.

"Take it. In my country Turkey, it is called a nazar. It will bring you good luck and keep you safe from evil." He gave Kai a small smile and a last squeeze on the arm before getting into his cab.

Kai had looked after him as he left and brushed his thumb over the small blue and black eye on the front of the medallion. That small gesture from the stranger had made Kai smile and momentarily feel a little better. It had been nice that one stranger could see another stranger's pain and not be completely oblivious to it. Kai wasn’t a person to hide his emotions. His mother said he carried his heart on his sleeve and if he felt something, everyone knew about it.

He’d collected his bags and walked toward one of the check-in counters. Sleep hadn't been his friend last night so as he’d stepped up to the check-in counter he’d only mustered a good morning and half smile, the angst of the unsent email had weighed heavily on his mind.

He’d sat down at the Coffee House that had free Wi-Fi and ordered a large black coffee. Kai said no thanks to anything to go with it, he just wasn't that hungry. As his laptop had fired up, he’d rubbed his clammy hands on his thighs. The email had still been there staring at him as if to say “are we still not done yet.”

To give himself a few more legitimate minutes to dwell, he decided to read through what he’d written one last time.

Phetra often refers to herself as the odd man out, the dorky book nerd who rather spend her time with a good book or making up fantastic stories with even more fantastic characters, than live in the real world dealing with real people.

The real world is strange in a very non humorous way and people in it complicate it to the point of wearing you out. In the world of the written word no matter if it is in someone else's words or that of her own things might get busy, complicated, and sometime even plain painful but somewhere along the line there is always a hero on the horizon. He might not be prime or proper, a church going pretty boy since the author prefer rebellious men and women who don't follow the protocols of society.

One of her favorite saying are that only dead fish follow the stream and well she ain't no dead fish.

Phetra live together with her family, two children, a domestic partner and their two cats in Gothenburg, Sweden and when reading her books you will notice that she always finds a way of bringing her on culture into her books.

The joy of writing and reading comes from her childhood and is something she has always loved, something she is passionate to share with others. Phetra loves hearing from her readers even with ideas of what they want to come next.

If you are looking for her the best place to start looking for her is at home in the quietest corner of the house where you'll find her either curled up with her Kindle or her laptop typing away.

December 16: Elisa - My reviews and Ramblings