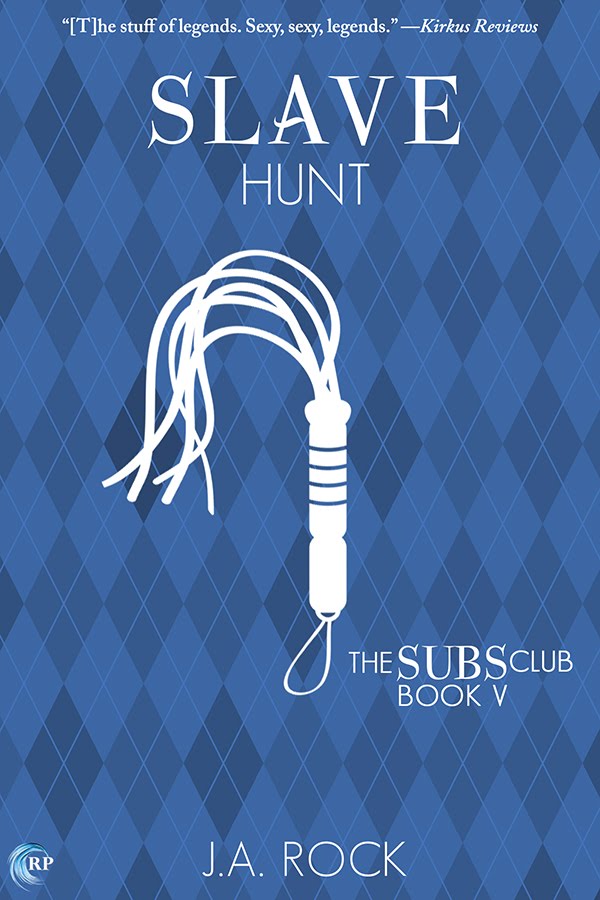 Hi! I’m J.A. Rock, and I’m touring the internet to talk about Slave Hunt, Book 5 in The Subs Club series. Thanks so much to the blogs that are hosting me on this tour, and be sure to leave a comment with your contact info for your chance to win a $15 Riptide Publishing voucher.

Thirty people. Two hours. Only the strong will survive.

When Riddle decides to put on a slave hunt, the Subs Club is on board. Tops hunting bottoms in the woods with paintball guns? Yes. Captives strung up on whipping posts, at the mercy of their captors? Hell yes. But on the morning of the hunt, nothing’s going according to plan. Miles and Drix are at odds over Miles’s reluctance to move in together. Dave is determined to show up D, who thinks Dave won’t last two minutes in the woods. Gould finds himself torn between obeying his master’s orders and living out a longtime fantasy. And Kamen inadvertently becomes a double agent when he aligns himself with two different parties.

By the end of the hunt, alliances will be forged and broken, loyalties will be tested, relationships will be strengthened…and someone will barrel roll. Narrated by ten different characters, Slave Hunt tells the story of two hours in the woods that will change everyone forever. Or at least, remind them that love is the greatest victory of all.

About The Subs Club Universe

After the death of their friend Hal at the hands of an irresponsible dom, submissive friends Dave, Kamen, Miles, and Gould band together to form the Subs Club—an organization seeking to expose dangerous local doms. The club slowly evolves as romances blossom, loyalties are tested, and tensions mount in a community already struggling for unity in the wake of Hal’s death.

From domestic discipline to knife play to fashion paraphilia, and from family drama to new jobs to first loves, the members of the Subs Club explore life’s kinks inside and outside of the bedroom as they attempt to let go of the past and move forward.

Check out the universe at Riptide Publishing: http://riptidepublishing.com/titles/universe/subs-club

To celebrate the release of Slave Hunt, one lucky winner will receive $15 in Riptide Publishing credit! Leave a comment with your contact info to enter the contest. Entries close at midnight, Eastern time, on October 22, 2016. Contest is NOT restricted to U.S. entries. Thanks for following the tour, and don’t forget to leave your contact info!