Kieran by Toni Griffin - Blog Tour with Review and Giveaway 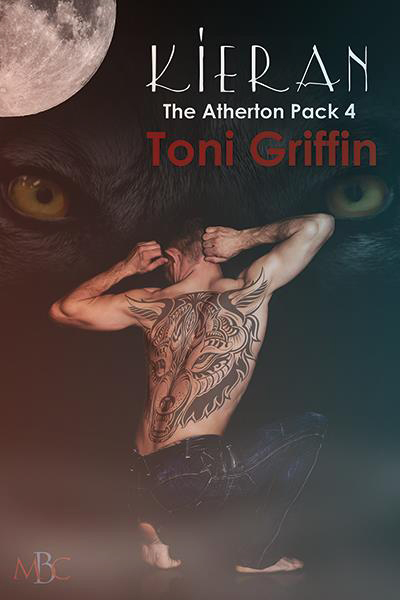 "You need to go to Atherton," they said. Easy for them. The higher-ups at headquarters don't have their whole world on the line. When Detective Damon Kelly's bosses send him across the state on a "simple" cyber fraud case, he never thinks he'd meet his mate, then risk losing Kieran by doing his job. No matter what other possible angles Damon works, his partner Grant Davis is sure Kieran's best friend Corey's their guy, and Grant is bent on bringing him in.

After the birth of their Alpha's son, the Atherton Pack needs another beta. Kieran Baxter couldn't be happier to accept. What Kieran doesn't expect is for all hell to break loose his first week on the job. Clashing with his mate at every turn, and fighting a human cop who wants to arrest Corey for hacking a government database, wasn't part of the plan either.

As more evidence piles up, a bigger, scarier picture comes into focus that could threaten not only the Atherton Pack, but everything the world knows.

"I don't like him," Damon's partner, Grant Davis said as he climbed into the passenger side of their rental car. "The guy is guilty as sin. I mean, just look at him." Grant waved a hand back towards the house where Corey stood in the doorway watching them.

Damon sighed. He knew Corey Jones was guilty of hacking the Australian Births, deaths, and marriages database. Unfortunately, he had to try to convince his partner that Corey wasn't the one they were after. How he was going to accomplish that with the way Grant had latched onto Corey was anyone's guess.

Damon started the engine and pulled the car away from the curb. Grant continued to rail next to him about how Corey was their man; Damon tuned him out. His mind stuck on one fact and one fact alone. With the way his body reacted as soon as he stepped into Corey's home, Damon was positive his mate had been there, and thankfully by the masculine scent, it was a man.

His body still thrummed with desire. As much as he hated it, right now Damon was glad Grant had fixated on Corey, as it meant his partner wasn't paying close attention to him. He was also thankful that he was wearing underwear, or his condition would have been a hell of a lot more obvious than it already was.

It had taken everything in him not to question Corey about who else had been in his house. His partner was already suspicious. Damon didn't want to add fuel to the fire. Now all he could think about was ditching his partner and calling Corey to find out who the hell his mate was. The fact his body refused to calm the fuck down convinced Damon his mate had been in Corey Jones's house.

His life had just become complicated beyond measure.

Damon's emotions were all over the place. He couldn't decide if he was happy this had happened or not. Now wasn't exactly the right time for him to be meeting his mate, especially with his partner on the warpath. Damon was here to do a job, and that job was ultimately to arrest Corey Jones. He already knew he couldn't let that happen. He needed to keep his head clear, and finding his mate wasn't going to allow him to do that.

Then again, the idea of sinking deep into the man that was fated to be his, having him writhing in pleasure under Damon as he breached him and bit, marking the man as Damon's for all to see, had his heart racing and his dick aching in seconds. There was no way Damon could explain why he would be all over another guy all of a sudden, which meant he would have to wait until this was all over and could take the time he wanted to get to know his mate.

"Are you even listening to me?" Grant asked sharply, snapping Damon out of his whirling thoughts.

"Sorry, what?" he asked. He hadn't even really been paying attention to where he was driving, which wasn't a smart idea. Luckily, he had driven them back to the Atherton Hotel, where they were holed up. Accommodations in this little town were few and far between if you weren't looking for a tourist hot spot. The hotel sat right on Main Street with a decent pub attached to it.

"Where were you?" Grant asked him. "You completely zoned out."

"Yeah, sorry, just thinking about the case," Damon replied quickly. "Anyway," he continued, not letting Grant say anything, "I'm starving. Feel like a bite to eat?"

"Definitely. We can grab some food, then go over the case again. I really would like another run at Corey Jones."

Damon sighed internally. "Sure. What do you feel like?" They were still sitting in the parked car outside the hotel. They had been eating there for dinner, and he was sure they would be again tonight, so he didn't particularly fancy it for lunch as well.

"Let's drive around and see what we can spot. I don't really feel like the typical fast food though."

"Sounds like a plan to me." Damon put the car in reverse and backed out of the angled park. They slowly drove through town, turning off the main street and heading down the parallel road. They kept their eyes open for anything that caught their attention.

"Oh. How about that place?" Damon motioned to a bakery called Sinful Delights off to the right. His mouth was already watering at the possibilities.

The shop looked to be popular, as all the parking in front was taken. Damon slowed and indicated when he saw someone exit the shop with a bag of goodies and climb into a car. He waited patiently for the man to pull out, and he parked.

"Let's go. I'm starving." Grant rubbed his hands together as they walked the short distance to the shop front.

As soon as they entered, a number of scents hit Damon all at once. Delicious pastries sat in a glass-fronted cabinet. In another, there were fresh rolls and sandwiches already made up ready to go, and behind the counter sat a small warmer with what looked to be homemade pies, pasties, and sausage rolls. Everything smelled incredible.

"Oh yeah. This is what I'm talking about," Grant said as he made his way through the small crowd waiting to be served so he could properly see what was in the cabinets.

Damon let him go. What pulled him up short was the overwhelming scent of wolf.

"This was a bad idea," he muttered to himself. There was no going back now, though. Not that he really wanted to. This place looked and smelled amazing. He just hated that he'd gone to a pack-run business, especially given the reason they were here in the first place. What were the odds in a town of this size that he would wind up here?

Normally Damon always tried to support his fellow pack members wherever possible. With Grant tagging along, though, he didn't want to risk his partner getting more suspicious than he already was.

The jingle on the door was constant with customers coming and going. Damon stepped up behind Grant as his partner placed his order. Anyone would think that man was a shifter with the amount of food he was ordering. Damon had just decided on what he wanted when a man in a forest-green apron stepped up on the other side of the counter. His name tag said Declan.

Their eyes connected, and Declan paused for a moment before he hastily looked to Grant and then back at Damon. He pasted a smile on his face, even though Damon could tell the other man knew exactly who they were and didn't mean the smile in the least.

"Welcome. What can I get for you today?" he asked.

Kieran is the 4th book in the Atherton Pack series. While Kieran could be read as a standalone, for a richer reading experience I highly recommend reading the previous books. I'll admit that I haven't read the book prior to this one but I wasn't lost at any point in the storyline.

Kieran is a fast paced read which picks up the story of the Atherton Pack after Corey hacks into the government's computers to add their newest pack member into the Births/Deaths Records. Damon and his partner are sent out to find the hacker and bring them to justice. Damon is well aware of who the hacker is but his partner has his eyes set on Corey and does everything he can to catch him. While all this is going on, Damon stumbles on the man who is his destined mate, Kieran. A chance meeting between them happens at a bar and results in Kieran marking Damon.

The road for Kieran and Damon is not smooth, and it leads to a lot of misunderstanding between this new couple. A large part of both their animosity and what leads to the misunderstandings is that they don't know each other. There wasn't a 'getting to know you' period in their relationship because the mark occurred on their very first meeting. Even with their mating link they don't seem to communicate very well. I will say that this frustrated me because they had so many opportunities to discover the other person but didn't take them. Or maybe they didn't think to use those opportunities to know their mate.

There are a series of events in Kieran that affect the entire shifter community and it will be interesting to see how those events shape any future books in this series or in the Holland Brothers series. While Kieran is a high impact book in the series, I just wish there had been more development in the relationship between Kieran and Damon. That really was the only lacking point to the story for this reader/reviewer. While that was a sticking point for me, I highly encourage other readers to see for themselves as what doesn't work for one reader may work for another. So I recommend checking out Kieran as a solid entry into the Atherton Pack series. 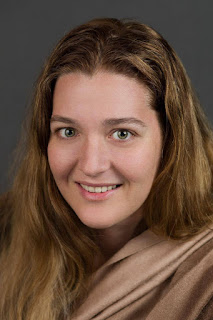 Toni Griffin lives in Darwin, the smallest of Australia's capital cities. Born and raised in the state she's a Territorian through and through. Growing up Toni hated English with a passion (as her editors can probably attest to) and found her strength lies with numbers.

Now, though, she loves escaping to the worlds she creates and hopes to continue to do so for many years to come. She's a single mother of one and works full time. When she's not writing you can just about guarantee that she will be reading one of the many MM authors she loves.

Feel free to drop her a line at info@tonigriffin.net anytime.