Road To The Sun by Keira Andrews - Release Blitz with Giveaway 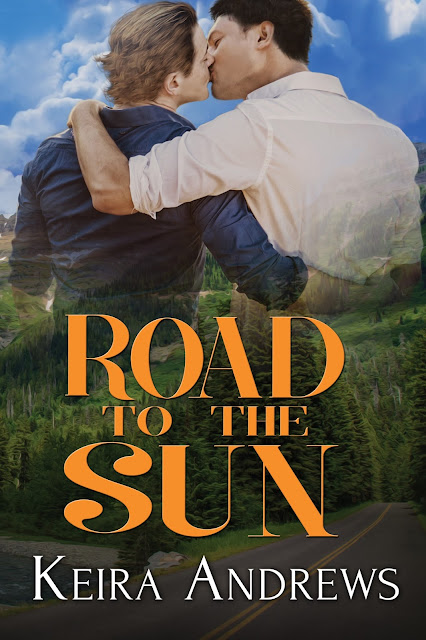 A desperate father. A lonely ranger. Unexpected love that can’t be denied.

Jason Kellerman’s life revolves around his eight-year-old daughter. Teenage curiosity with his best friend led to Maggie’s birth, her mother tragically dying soon after. Insistent on raising his daughter himself, he was disowned by his wealthy family and has worked tirelessly to support Maggie—even bringing her west on a dream vacation. Only twenty-five, Jason hasn’t had time to even think about romance. So the last thing he expects is to question his sexuality after meeting an undeniably attractive park ranger.


Ben Hettler’s stuck. He loves working in the wild under Montana's big sky, but at forty-one, his love life is non-existent, his ex-boyfriend just married and adopted, and Ben’s own dream of fatherhood feels impossibly out of reach. He’s attracted to Jason, but what’s the point? Besides the age difference and skittish Jason’s lack of experience, they live thousands of miles apart. Ben wants more than a meaningless fling.

Then a hunted criminal takes Maggie hostage, throwing Jason and Ben together in a desperate and dangerous search through endless miles of mountain forest. If they rescue Maggie against all odds, can they build a new family together and find a place to call home?

Road to the Sun is a May-December gay romance from Keira Andrews featuring adventure, angst, coming out, sexual discovery, and of course a happy ending.

After writing for years yet never really finding the right inspiration, Keira discovered her voice in gay romance, which has become a passion. She writes contemporary, historical, fantasy, and paranormal fiction and — although she loves delicious angst along the way — Keira firmly believes in happy endings. For as Oscar Wilde once said:

“The good ended happily, and the bad unhappily. That is what fiction means.”