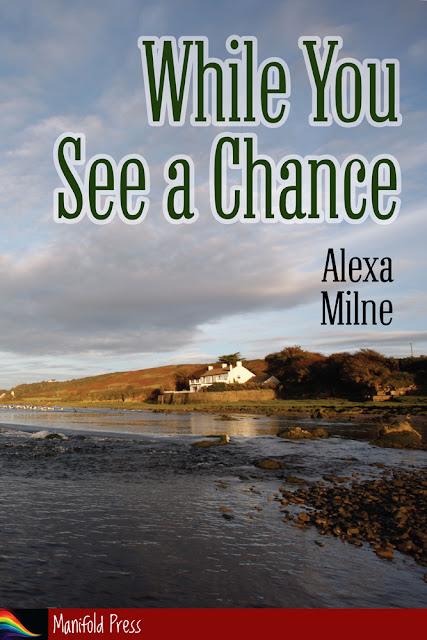 As children growing up in South Wales, Sion, Phil and Helen were known as the Three Musketeers, always together and never apart - but time moves on. Sion left to lecture in history at Yale. Phil married Helen because it seemed the obvious thing to do, and they settled down to life in Manchester.


Now all three are approaching sixty. After the death of his partner, and wanting to solve a family mystery, Sion returns to his childhood home to start again. When Helen announces she wants a divorce, Phil also returns home, to a new teaching job, and to renovate the ruin of a house he and Sion once dreamed of living in.

“D’you want help with packing your shopping, sir?” the girl on the till asked in a sing-song voice typical of the area.

“No, thanks, I haven’t got much.” He pulled off a few plastic bags, a difference from the usual brown paper of American supermarkets. In a hurry, he didn’t pay much attention to the people around until a voice, that came from so long ago, distracted him. He lifted his head.

“You have to pay five pence each for those, sir. New rules.”

Sion turned his attention back to the girl. “That’s fine. Don’t worry.”

He glanced over to the other till in the direction of the voice where a large man stood stuffing his purchases into a bag. He stood well over six feet, with broad shoulders, which Sion supposed tapered down to narrower hips. A heavy suede coat covered the man’s rear, making it hard to tell. His luxuriant salt and pepper locks reflected the many shades that older ginger-haired men often had when mixed with grey. Strands curled over the fur collar of his coat. Something familiar about the man made Sion’s senses tingle.

The assistant at the other till spoke to the customer. “That’ll be eighteen seventy-four please, Mr Price, and I’ll see you at parents’ evening tonight. I hope Jamie’s been behaving himself this term.”

Sion’s breath hitched, and the girl on his till gave him a puzzled look as he turned away. The noise he’d made must have been more audible than he’d intended. Now he was absolutely certain of the man’s identity, even if he hadn’t seen his face. He leaned on the counter and took a deep breath, hoping to slow his racing pulse.

“Are you all right, sir?” the girl asked. “I guess with that accent you’re not from around here. On holiday, is it? It’s a lovely part of Wales, even at this time of year. Lots to do.”

“Yes, sorry, and no, I’ve just moved here,” he said, raising his head to meet her concerned gaze, but keeping his face down. “How much do I owe?”

The girl told him and he handed over the money in a hurry, not wanting to lose sight of the other man. Sion followed his childhood friend until he stopped behind a Land Rover near the entrance. Shaking slightly, Sion moved nearer.

“Phil?” he asked quietly, not wanting to make the man jump.

“What the – ?” Phil stared at him then rubbed his eyes as if he couldn’t quite believe them.

The shock on his friend’s face made Sion step back for a moment. He took in the figure in front of him. Phil had turned into a huge bear of a man, complete with beard. He’d always had the height, but now he had the breadth as well. Sion imagined his size might intimidate the small children in his charge. Now, Phil simply stared, his eyes wide with shock, then took a step backwards as if he’d seen a ghost.

“It’s me, Phil,” Sion said. He supposed he’d also changed over the last thirty years. His hair, now grey, was cut short at the sides but longer on top. He’d put on a few pounds since his teens, but remained lean and wiry, although more through luck and genetics, than diet and exercise.

“Bloody hell.” Phil continued staring, then put out his hand. Sion took it, and they stood shaking and saying nothing for an awkward moment. “My God, Sion, hmm, I’m sorry, I wasn’t expecting … What on earth are you doing here? Are you here for Christmas?”

“I’ve just bought a house locally. I’m back to stay. I guess I’m the last person you expected to find out shopping. Mind you, I could say the same for you. I thought you lived up north.”

“I’ve been back four years. I’m head at a local primary school. When Helen and I got divorced, I decided to come home to Wales. So, why on earth are you here of all places?”

Sion had to collect his thoughts and process that information. Phil and Helen had split up? Come on, get your act together. “I decided to move back after … It doesn’t matter for now, it’s a long story. Look, why don’t you and I have dinner tonight and catch up? There must be a decent local restaurant – unless you’re busy, of course. Sorry, that was presumptuous of me.”

Phil lifted the bag into his car then slammed the boot closed. “No … I mean yes. I’m sorry, I can’t do tonight. I’ve got to get going. I slipped out at lunchtime to get a few bits and pieces for parents’ evening.”

Sion heard the shake in his old friend’s voice, but resisted the temptation to reach out and touch him again. “It’s okay,” Sion said, reaching into his pocket for his wallet. He took out a change-of-address card. “I live here now. Call me any time.”

Sion waited while Phil parked the trolley in the bay to the front of the building and returned to his car.

“I will, but I’m not sure when. It’s a busy time of year, leading up to the holidays.” Phil glanced at his watch. “I’ve got to go.”

Sion moved closer and this time touched the other man’s arm. “It’s so good to see you again.”

Phil continued to stare at the ground, obviously unable to look him in the eye. “You too, but I must get off. I’ll call as soon as I can.” Phil jumped into his car without looking back.

Sion watched the Land Rover pull out of the car park before returning to his SUV. Sitting in the driver’s seat, he reached for his wallet again. Tucked away inside, he found the photo he’d carried with him for over thirty years, taken the day before he went off on his own to Oxford University. Everyone had called them the Three Musketeers, himself, Phil and Helen, always together, sharing everything except their deepest darkest secrets. Sion had loved Phil with a passion, but had never told him. Phil and Helen had gone off together to Manchester University, and had married not long after they’d graduated. Not wanting to stay, Sion had emigrated to America to lecture in history at Yale.

Leaning back in his seat, he thought back to the conversation he’d had with Helen the day before he’d left for Oxford. He’d often wondered if she ever told Phil about his confession that, being gay, he could never feel that way about her. Sion hoped she hadn’t. He’d been surprised to hear of their engagement, but hoped she’d come to love Phil. For the truth and tragedy of Sion’s life was that he’d only ever been in love with one person, and he’d just watched him drive away.

Originally from South Wales, Alexa has lived for over thirty years in the North West of England. Now retired, after a long career in teaching, she devotes her time to her obsessions. Alexa began writing when her favourite character was killed in her favourite show. After producing a lot of fanfiction she ventured into original writing. She is currently owned by a mad cat and spends her time writing about the men in her head, watching her favourite television programmes and usually crying over her favourite football team.