Order of The Sicari by Monica Burns - Review and Excerpt Tour

Ancient Rome Collides with Present-Day and Only Love Can Save an Empire’s Collapse and Ensure Another’s Downfall!

Assassin's Honor
(Order of the Sicari #1)

Only love can save a telekinetic assassin's honor in a world where Ancient Rome never fell. Passion abounds in this award-winning series.

The Roman Empire never collapsed for Ares DeLuca and other Sicari. Ares comes from an ancient bloodline of telekinetic assassins who have lived in the shadows for two millennia. The Sicari are honor bound to kill only in the name of justice, but Ares broke the Order’s code and used his sword for revenge. Love cost him dearly once before, and he’s not willing to pay the price again. At least not until hot, sweet, delectable Emma enters his world. Not only does she have the ability to save an ancient empire’s collapse, she holds the key to a valuable Sicari relic and quite likely the key to his heart.

Archeologist Emma Zale sees the past when she touches ancient relics. It’s how she uncovered evidence of an ancient order of assassins—the Sicari. When a sinfully dark stranger shows up on her Chicago doorstep, he drags her into a world where ancient Rome still rules, and telekinesis and empaths are the norm. But someone wants her dead, and her only hope of survival is an assassin who’s every bit as dangerous to her body as he is to her heart.

This award-winning series (reissued for the first time) starts off with a bang with an exciting combination of romance, suspense, sexy paranormal assassin heroes, and extraordinary world-building. 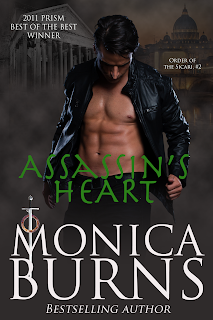 Assassin's Heart
(Order of the Sicari #2)

Can the truth of the soul Conquer the pain of its ancient past.

Unlike other Sicari, Lysander Condellaire has telepathic and telekinetic powers. Not until the night a Praetorian tortured him and left him for dead did he understand why. Now, the half-angelic, half-demonic face he sees in the mirror is a reminder of the monster he must keep hidden or face expulsion from the order of assassins known as the Sicari. But his dreams of ancient Rome hint at a destiny difficult to accept, especially when it involves the woman he loves, but can never have.

A gifted healer in the Order, Phaedra DeLuca witnessed her mother’s murder when she was a little girl. The haunting memory makes her loathe everything Praetorian. When she travels to Rome in search of an ancient artifact, she must work alongside a man who once cruelly rejected her love and healing touch. But her dreams of ancient Rome tell of an irreversible and possibly dangerous future. For the distant past and present are about to collide–with the one man she is destined to love. 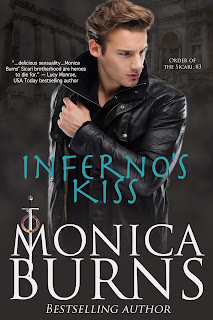 Inferno's Kiss
(Order of the Sicari #3)

The Sicari brotherhood is back and this time they're taking no prisoners when it comes to protecting the Order as warriors and lovers are torn between duty and desire.

Cleo prefers working alone—until she meets Dante who shares her goal: to destroy a Praetorian stronghold where Sicari women are imprisoned for devious purposes. Bringing the mission off without a hitch pumps up more than their resolve. It sets off a sexual spark too combustible to ignore.

As their attraction flares like an inferno, the stakes are raised. So are the risks. Before the mission is over, Dante and Cleo will be plunged into a dangerous conspiracy where a traitor threatens the very foundation of the Order, as well as the fiery bond between Dante and Cleo—warriors and lovers now torn between duty and desire.

“WOW! A kick-ass self-confident heroine and an alpha male with a side order of vulnerability practically guarantee a mind blowing reading experience." — Fresh Fiction

“I loved that Cleo is the experienced lover while Dante is the virgin. Hallelujah and pass the cornbread. The sexual tension in here had me on edge, waiting to see if Dante would succumb or abstain.” — Smexy Books

The Order of the Sicari Series 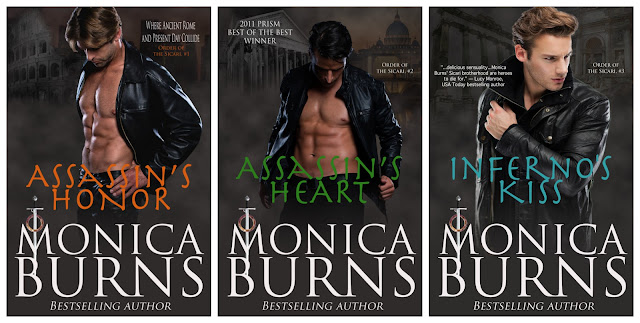 Monica Burns is a bestselling author of spicy historical and paranormal romance. She penned her first romance at the age of nine when she selected the pseudonym she uses today. Her historical book awards include the 2011 RT BookReviews Reviewers Choice Award and the 2012 Gayle Wilson Heart of Excellence Award for Pleasure Me.

She is also the recipient of the prestigious paranormal romance award, the 2011 PRISM Best of the Best award for Assassin’s Heart. From the days when she hid her stories from her sisters to her first completed full-length manuscript, she always believed in her dream despite rejections and setbacks. A workaholic wife and mother, Monica is a survivor who believes every hero and heroine deserves a HEA (Happily Ever After), especially if she’s writing the story.


You can find Monica at