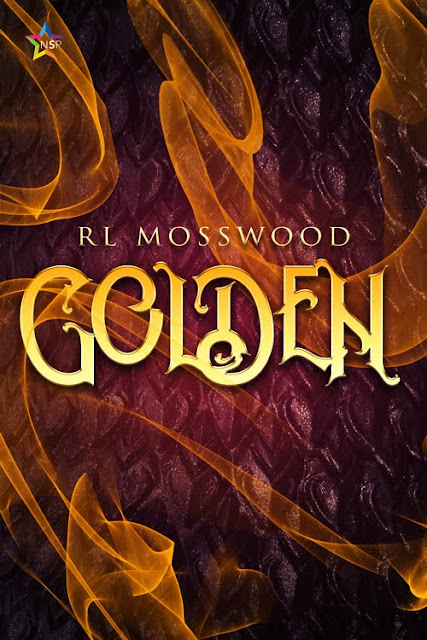 Harem boy might not be the most appropriate role for someone who’s never really seen the appeal of sex, but Elin’s status as dahabi: golden in a land of tan and brown, has marked him for The Dragon’s service since birth. He’s content enough with his life of uncomplicated, if restrictive, luxury, until an unremarkable chore becomes a case of love at first sight.

Mysterious newcomer Hathar, a roguish “merchant adventurer” from far-off lands, ignites an exploration of Elin’s first taste of physical desire, as well as a desire to experience life beyond the palace. Now, they must find a way to escape before Hathar’s ship departs, stranding them forever in The Dragon’s harem.

For Elin, who's spent almost his entire life within the walls of the palace, Hathar's stories of life at sea are endlessly fascinating. In this excerpt, we get to see a companionable moment between them where Hathar shares a glimpse of his childhood. He had a monkey!

“Tell me more about the sea,” Elin asked. He and Hathar were lounging near the fountain in the wooded part of the garden, in what he’d come to think of as “their” place: the one spot they were reasonably assured of some peace and privacy from the whispered taunts and disapproving sidelong glances that otherwise followed them.

Hathar chuckled indulgently. They had covered the animals—the great grey whales singing songs beneath the waves that caused the very timbers of the ship to hum, and the spritely dolphins that would materialize out of nowhere to leap and spin in the wake. They’d spoken of the changeability of the weather—red skies and seething storms that could reduce masts to splinters, so different from the repetitive balmy pleasantness of Minal’taneen, and they’d covered the exotic ports and peoples, with their fascinating customs and foods and modes of dress.

“What more do you want to know?”

Elin twined his fingers absently in the silky strands of Hathar’s hair as he thought, relishing the weight of his lover’s head in his lap. “Tell me about your boat,” he said, finally.

“My boat…” Hathar repeated. “Well, first of all, she’s a ship. A ship can carry a boat, but a boat can’t carry a ship, you know.” Elin did not know but he nodded, encouraging Hathar to go on.

“She’s a three-masted fluyt. My father’s, originally. He was an excellent trader. Very methodical. He had his route, and he stuck to it, year in and year out. Kept perfect books. He could tell you how much he made on a bale of raw cotton any time in the last twenty years, if you just gave him a moment to consult his ledgers.

“He named her The Prudent Mistress. I’ve often wondered what my mother thought of that, but she died of fever when I was only a few years old, so I never got the chance to ask.”

Elin’s brow furrowed. He didn’t have much of a memory of his own mother, of course, having been delivered to The Dragon at not much more than two years old, but he still felt a pang at the thought of tiny Hathar going through such a loss.

“I sailed with Dad after that. Not a bad way to grow up really, with the whole world as your classroom. Lacking a little for playmates, maybe, but he kept me busy, and I did have a monkey for a while.”

“Yeah. Cute little thing. Used to steal treasures and bring them back to me. Of course…a monkey’s idea of treasure… Sometimes it was a nice stone or a piece of broken glass, sometimes coins or brooches. Once he proudly presented me with three brass buttons from the coat of a wealthy merchant who’d come to meet with Dad. That took some explaining.”
He laughed at the memory and trailed off, staring up past Elin into the cloudless sky.

Elin woke in his usual place on the silken pallet between Nikil and Rian. The haram was dark, and the night sky outside the elegant, grated windows was still inky. He wasn’t sure what had roused him. He couldn’t recall a dream, and the room was quiet but for the usual nighttime chorus of the men’s sighs and snores.

A moment later, he realized he could hear something else. Not in the room, but maybe down the hall or from the floor below, he could make out rough, raised voices. A fight? But who would it be at this hour, and in this part of the palace? He propped himself on his elbows a little and scanned the room—all the beds seemed to be filled. The men of the haram knew better than to fight anyway, at least not that kind of fighting, with yelling and tussling. The Dragon didn’t take damage to “her boys” lightly, and anyone caught inflicting that damage was likely to disappear without notice or explanation.

He listened a little longer, trying to make out words or recognize a voice, but whatever was happening was far enough off to make that impossible. Finally, he heard a door slam, and that seemed to be the end of it.

He rolled over and drifted off, still puzzling over what he had heard.

At breakfast the following morning, everything seemed normal. The hall was filled with the groggy murmur of men beginning their day, the rich aroma of coffee, and the tap of wooden cutlery on fine china.

Elin, as usual, sat on his own, thoughtfully chewing a honeyed pastry. Though it was hard to ever be truly alone in the haram, his tendency to quiet contemplation left him out of most of the livelier interactions the other men favored. He wasn’t much for sport, which was one of the main entertainments among his comrades, and his thoughts tended to follow slow and dreamy pathways that didn’t lend themselves to clever banter.

As he was pondering the particular play of light on the grain of the highly polished tabletop, a shadow moved into his peripheral vision. One of the guards, a man named Emun, was approaching. The guards of the haram were in a unique position: They were, in most ways, subordinate to the residents they guarded, so they spoke in polite tones, made requests rather than demands, and would usually do whatever was asked of them. At the same time, they were in charge of keeping the men in their place—generally not a hard job. Who would want to escape the lap of luxury, after all? But it was known that, if pushed, the guards would muster force to keep order, which lent an edge to all their interactions with their charges.

Elin finished his bite and looked up, inviting Emun to address him.

“I’ve got something for you to do after breakfast,” he said. “A new resident who needs some cleaning up.”

“A new resident? To our wing?”

Elin was used to being assigned chores considered beneath the more favored men of the haram, but this was unusual. His wing was inhabited by the twenty-one- to thirty-year-olds. They had all entered the haram as children, as soon as they’d been found by The Dragon’s collectors, or ceded by their parents. New arrivals had trickled in through their younger years, a few carefully hidden late arrivals into their early teens, but it had been nearly a decade since anyone had joined the group Elin had grown up with.

“Yep.” Emun cut his thoughts short. “City guard found him skulking around the palace walls and assumed he was an escapee, but we’ve never seen him before. He’s The Dragon’s now, of course. Pretty rough around the edges though. Weird accent, needs a scrub and a shave. See what you can do. Jurah will have him waiting for you outside the baths after you’re done here.”

“Sure. Okay.” Elin wasn’t sure what else to say. How did a fully grown dahabi end up wandering outside the palace? Did he mean to get caught? He supposed he’d have a chance to answer all his questions soon enough, and returned to his breakfast as Emun returned to his post near the door.

Outside the baths, Jurah was waiting as promised. With the guard was a man who could only be the new addition, looking much worse for wear than Elin had anticipated. His hair was so filthy and matted that Elin was surprised the city guard had known him as dahabi at all, and there was blood caked down his cheek and through his stubble from an angry split on his brow. He hadn’t come voluntarily, then. The sturdy rope binding the man’s wrists only reinforced that fact.

“Emun asked me to come down after breakfast,” he said, not quite ready to volunteer what he’d been asked to do. Maybe Jurah had a different understanding of the matter.

No such luck. “Yeah! I’ve got quite a job for you here,” the guard replied jovially, indicating the filthy man by tugging lightly on his bindings. The “job” in question scowled slightly, but said nothing.

“Does he, uh, need to stay bound like that?” Helping with a bath was one thing, but Elin didn’t think he had it in him to wrestle anyone into submission.

“Oh, no. Our friend here has settled down quite a bit since last night. He’s going to be on his best behavior for you. Right?” With that, Jurah elbowed the other man for a reply.

He looked up from under his brow, directly at Elin as if the guard wasn’t there, startling him with moonlit-silver eyes. “I’m no threat to you. There was just a…misunderstanding with these other gentlemen earlier, and they don’t quickly forget.”

Elin found, thankfully, that he believed the man. “Let him go then. I can’t get him cleaned up with his hands tied together.”

The guard did so and then hesitated a moment, as if unsure what do to next. “Would you like me to come in there…with you?” The guards usually gave the men of the haram their privacy in the baths—it was their job to protect, not to ogle—but Jurah clearly didn’t feel the same faith in the stranger’s intentions that Elin did.

Elin looked again into the strange, pale eyes. Seeing no malice there, he said, “We’ll be fine. You can watch the door to ensure a little privacy for our new guest, and I’ll call out if I have any need of you.”

Jurah looked uncertain, but released the man, clearly feeling himself on the subordinate end of the equation in this interaction.

Elin stepped forward and opened the door to the baths, gesturing for the man to follow. “It’s just a bath, really,” he said to the skeptical Jurah as he closed the door behind them.

RL Mosswood lurks in the depths of the Pacific Northwest rainforest, where they dabble in queer fiction in an attempt to add a little magic to their otherwise mundane existence.