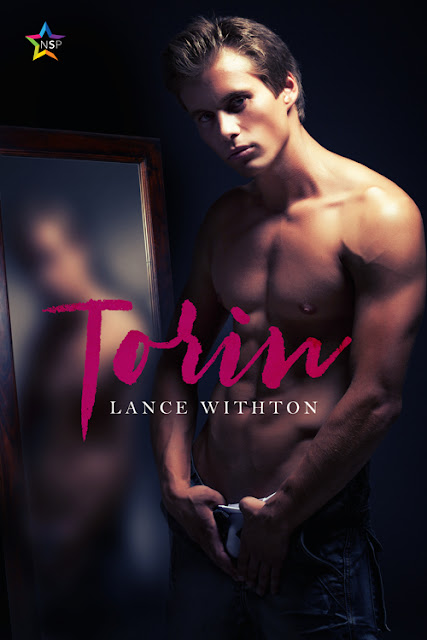 
Torin’s anxiety has made it difficult for him to navigate romantic relationships, so instead of trying, he keeps himself occupied with his work. But just because he doesn’t chase relationships doesn’t mean he doesn’t want something, even if he has to get it with a dash of taboo.

At Pillar, the only all-male brothel in the city, Torin makes an appointment with a charming sex worker who goes by the name “Davies.” It becomes hard for Torin to keep his emotions out of the intimacy, and his feelings become more complicated when a designer he works with starts to let on that his interest is more than platonic.

“Please look over the document to make sure we’ve got everything right.”

Mr. M slid the paper across the desk. Torin took it with nervous hands and glanced over the list.

While in Pillar, the city’s only all-male brothel and where he currently sat across from the establishment’s owner, Torin had spent far longer than he liked filling out an electronic document to make certain he’d vetoed everything he was uninterested in or made uncomfortable by. A summation of the results were now on the paper in his hands. The details on paper made the situation more real, somehow.

Torin had taken penetrative sex off the table, as well as oral sex and even undressing or touching below the waist. He’d made certain that his chosen worker wasn’t contractually able to do anything other than kiss him, and he was happy the owner and the lead screener hadn’t treated him oddly because of it.

“Have you finished reading?”

Torin glanced up at the owner, caught a glimpse of his gray hair, and focused back on the paper in his hand. He nodded.

“Do you need to make any amendments?”

Torin took a few minutes to reread the document, nodded to reassure himself he’d filled things out correctly, and then told Mr. M that he had no changes.

Torin released a nasal sigh and looked up at the owner. Mr. M was more personable than he’d expected the head of a brothel to be, but this was a working-class brothel, manned by desk staff in a front lounge while the rest of the building was hidden behind doors that led to a veritable maze of hallways. Mr. M was in many ways like a grandfather, which Torin thought should have been more unsettling than it was.

“Do you have any further questions?”

Torin swallowed and put the paper back on the desk. “I, ah… I do get a choice in who I—who I want to work with, don’t I?”

“Of course.” Mr. M opened a filing drawer in his desk and flicked through the files for several seconds before he finally pulled a few onto the table. He held them up one by one, opened them in front of himself, away from Torin’s eyes, and shuffled the contents. “Here are the best options for your specific desires. I’ve put the modest photos up front, so if you dig deeper, you’ll have to deal with something more provocative than you’d like.”

Torin nodded while he slid the files over to himself.

Torin picked up the third and final file.

“I would recommend Davies the most,” Mr. M said. Torin glanced up at his smiling face. “I hear he’s the best kisser.”

Torin gulped and opened the file. As he’d come to expect, there was a professional photo on the left. This photo was like Holland’s—Davies was on a barstool in a white studio. He was leaning over his knees, fingers laced and forearms resting on his thighs. He had common black hair and common brown eyes, but there was something about his cheekbones and his grin that Torin liked. He swallowed, hesitated, and lifted the corner of the picture to see the one beneath it. It was also modest, though was far more suggestive than the previous picture. Davies was prone on a bed, head lifted so he could look into the camera, and his fingers were laced under his chin. His eyes were half shut, and the smile on his face was nearly a smirk.

The right listed Davies’s specialties, but Torin didn’t read them because the last two lists had made him lose interest. He closed the file and set it on top of the other two.

“Excellent.” Mr. M collected the files and stacked them on his side of the desk. “Does the agreement cover what you are and aren’t looking for?”

Torin glanced over the document a final time. “Yes.” He paused and looked up at Mr. M. “And this agreement… the—Davies has to follow it exactly, right?”

“Of course. And if at any point you decide that you don’t want to do something allowed by the contract, let him know. Even if you can’t say no physically or verbally, he’ll check in with you every now and then to make sure you’re all right. If you choose to see him repeatedly, you two will figure each other out and routine check-ins might become unnecessary or might happen only rarely.”

For no reason other than he was uncomfortable, Torin looked back down at the paper on the desk in front of him. “Do you—ah, do you have a pen I can use?”

Mr. M opened his drawer and handed him what must have been a fifty-dollar pen. Torin stared at it for several seconds before signing his name on the provided line and then dating his signature. There were a few pages after the basic agreement, listing certain rules and legally pertinent information, which Torin skimmed for anything alarming. He initialed and dated those pages before he handed the paper and pen to Mr. M.

Mr. M stood, and Torin followed his lead to the rear exit of the room, which led to the administrative hallway separated from the lounge for client confidentiality.

Torin felt comforted by his smile. “You will,” he said. He offered his own smile. Mr. M opened the door for him, and after a farewell, they parted.

Torin headed down the hallway to the end where Ms. Madison’s office was located. She was one of two people who handled scheduling and was the only one in today. He stopped in front of her closed door and knocked with his shaking hand. He was going to do this. Torin was going to book time with a sex worker, and he wasn’t even going to have sex with him.

“Come in!” Ms. Madison called, and while he opened the door, Torin wondered how he’d gotten to the point in his life that he’d become so desperate for a shred of intimacy that he was paying someone to give it to him.

Ms. Madison’s office was half the size of Torin’s bedroom, and Torin lived in a midtown apartment. The woman wore cat-eye glasses the same red as her nail polish and had her hair up in a puffball of a bun. She and Torin worked out an afternoon appointment three weeks from then, after Torin left work. The following day was a free day for him. He thought he might need a day to ground himself after the experience. His nerves tended to get the best of him.

How much research do you do when writing a story and what are the best sources you’ve found for giving an authentic voice to your characters?

I don’t recommend my approach. I tend to do little research unless I’m writing in a setting I’m unfamiliar with, be it time period, location, etc., or writing based on existing cultures or mythology. Even then, I follow so many topics that I’m usually packed with trivia and know enough that I can use specific search terms to narrow a Google search to a source that’ll tell me (almost) everything I need to know.

What’s harder, naming your characters, creating the title for your book or the cover design process?

Both character names and titles are difficult for me. Sometimes I can name a character instantly with a “normal” name that exists in some region, somewhere, but oftentimes I start out with a made-up mash of letters and then consult a name dictionary to pick whatever existing name is closest. (“Torin” was originally “Trin.”) Behind the Name has been my go-to for years. That, or a character starts out with a nickname or epithet until I can think of something—“the painter” or “the teacher,” for example.

When it comes to titles? Most things I write have no titles and I scramble at the last moment for something relevant. Most of my writing files have the character name(s) as titles and nothing else.

How do you answer the question “Oh, you're an author...what do you write?"

I don’t consider myself an author, but when I mention I’ve had something published and people ask me about the plot, well… I sweat nervously, glance around, and try to dodge the question. A lot of people won’t let a person get away with that, so I have to come up with a tame, non-gay, semi-misleading way to explain things. I also don’t tell people the title of what I’ve written. That would be a mistake.

What does your family think of your writing?

They’re more supportive than I expected, considering my fiction is LGBT fiction. They seem happy that I’m doing something with my lifelong hobby. I’m one of two writers in the family, so I suppose it’s an interesting path to take.

Lance resides in the desert of Southern California, sees a minimum of 50 Joshua trees daily, and is surprised every time it rains. He fiddles with stories almost daily and has dozens, if not hundreds, of unfinished ideas lying around in his writing folder. When not trying to write something that keeps him interested, he spends his time whiling the day away with video games and related media.