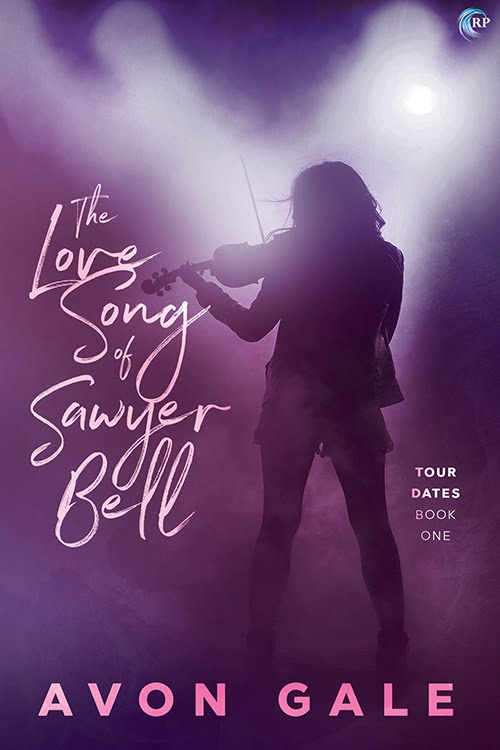 About The Love Song of Sawyer Bell

Victoria “Vix” Vincent has only two weeks to find a replacement fiddle player for her band’s summer tour. When classically trained violinist Sawyer Bell shows up for an audition, Vix is thrilled. Sawyer is talented, gorgeous, funny, and excited about playing indie rock instead of Beethoven. Their friendship soon blossoms into romance, even though Vix tries to remember that Sawyer’s presence is only temporary.

Sawyer’s parents think she’s spending the summer months touring Europe with a chamber ensemble. But Sawyer is in dire need of a break from the competitiveness of Juilliard, and desperately wants to rediscover her love of music. Going on tour with her secret high school crush is just an added bonus. Especially when Vix kisses her one night after a show, and they discover that the stage isn’t the only place they have chemistry.

But the tour won’t last forever, and as the summer winds down, Sawyer has to make a tough decision about her future—and what it means to follow her heart.

One of my favorite things about writing The Love Song of Sawyer Bell is that I set it in the world of Americana/Alt-Country, which is my favorite musical genre. So, here are my top-ten favorite Americana songs, and let me tell you, I agonized over this list because it’s really hard!!

1.      Good Morning, Magpie (Murder by Death)
This is probably my favorite song and my favorite band, and I love their sound so much. It’s like…dark-folk-Americana and I want literally everyone to listen to them. I have a tattoo of the lyrics “Just follow some other storm” from this song.

2.      The Road, Frank Turner
Frank Turner is a little more rock than Americana (and he’s British, LOL), but he’s one of my absolute favorite musicians (and puts on an AMAZING show, full of energy) and this song has a lot of personal meaning to me. I have a quote from it as a tattoo, as well (“to the heart”) as well as a compass, which is from this song.

(I have a lot of lyric tattoos, as you’ll see)

3.      Whiskey Bottle, Uncle Tupelo
Sawyer references this song a couple of times in the book. Uncle Tupelo is often referred to as the first “alt-country” band, and this song is actually written about the town I live in – Columbia, Missouri. The “Liquor, Guns and Ammo” sign referenced in the song is hanging in a local favorite pizza place. I have the phrase “Not forever, just for now” as a tattoo.

4.      Let it Ride, Ryan Adams
Guess what, I have a tattoo from this song, too. Ryan Adams is super prolific and his music is probably more indie rock than straight-up Americana, but he started in the Americana/Alt-Country band Whiskeytown and the sound still influences his music (at least, IMHO). I have “Let it ride, let it roll, let it go” as a tattoo from this one. (Noah Greer, who is mentioned briefly in the book and who is a character in the second Tour Dates novel, is sort of based on Ryan Adams. Don’t sue me, Ryan.)

5.      What Else Would You Have Me Be, Lucero
Lucero is a band I have seen a million times and who are not only super awesome, but super nice guys, too. They’re the inspiration for Racer, because seriously these guys tour constantly and have a super loyal following (myself included – I’ve seen them too many times to count!). Ben Nichols’ voice sounds like vodka and cigarettes (he’s my inspiration for Jackson “Jax” Elliott, who you meet in the book and who is the other MC in the second Tour Dates book!)

6.      Birmingham, Shovels and Rope
This band is a husband-and-wife team from South Carolina who play literally all the instruments and sing at once. It’s amazing, for reals. They put on one of the absolute best concerts I’ve ever been to in my life.

7.      Zip City, Drive-By Truckers
Talk about another hard-working band who tours constantly and has a huge, loyal fanbase (again, myself definitely included!) This song is about a young guy who is desperate to get out of his small town, which is a common theme but…let’s just say that vocalist/lyricist Mike Cooley makes the protagonist interesting because you really, really won’t like him. I love songs that are stories, and this isn’t an easy song but it’s a powerful one. Also Mike Cooley’s voice turns me into a puddle of goo. Gah.

8.      Same to You, Lydia Loveless
Okay, I’ll straight-up tell you that Lydia was the inspiration for Victoria “Vix” Vincent, because I was at a Lydia Loveless concert when I got the idea for the book. Lydia Loveless is young, brilliant, and her lyrics are incredible. Her voice is so amazing. I seriously love all her music, it’s raw, open and honest, and I’m not lying – the pipes on this girl. Incredible.

9.      Ashes, Lindi Ortega
Lindi has this great, old-school country voice that makes me think of road trips and late-night diners and horror movies? I don’t know. Her voice is so distinctive and unique, and um, not going to lie, she’s insanely gorgeous.

10.  Furnace Room Lullaby, Neko Case
This is another one of my all-time favorite songs from a super talented, gifted artist. I love how atmospheric this song is, how slightly sinister and dark, and for some reason all her music reminds me of Margaret Atwood stories but I have absolutely no reason to think that?

Bonus:
Swimmer by Amanda Shires
Amanda Shires plays the fiddle and I unabashedly based Sawyer a bit on her. Amanda also has this AMAZING cover of “I’m Your Man” by Leonard Cohen that is one of the sexiest songs I’ve ever heard. Here’s the video:  https://www.youtube.com/watch?v=whmusWfbUJI

And if you like, I’ve made a Spotify playlist with all these songs here: https://open.spotify.com/user/22km7zbgjjjxp5ymtags54ahi/playlist/6RjBZI9zPp4iyLCrgOZCWB

And I have a REALLY long (like, hundreds and hundreds of songs) playlist I listened to while writing The Love Song of Sawyer Bell, here: https://open.spotify.com/user/22km7zbgjjjxp5ymtags54ahi/playlist/2AsMRLz7EGvp0akkNQqugs

Happy listening, and come talk music with me anytime!!

To celebrate this release, one lucky winner will receive a signed paperback copy of The Love Song of Sawyer Bell! Leave a comment with your contact info to enter the contest. Entries close at midnight, Eastern time, on September 30, 2017. Contest is NOT restricted to U.S. entries. Thanks for following the tour, and don’t forget to leave your contact info!