A brand new story in the BALLS TO THE WALL Series!

Sometimes only the wrong guy can bring the
right happy ever after. 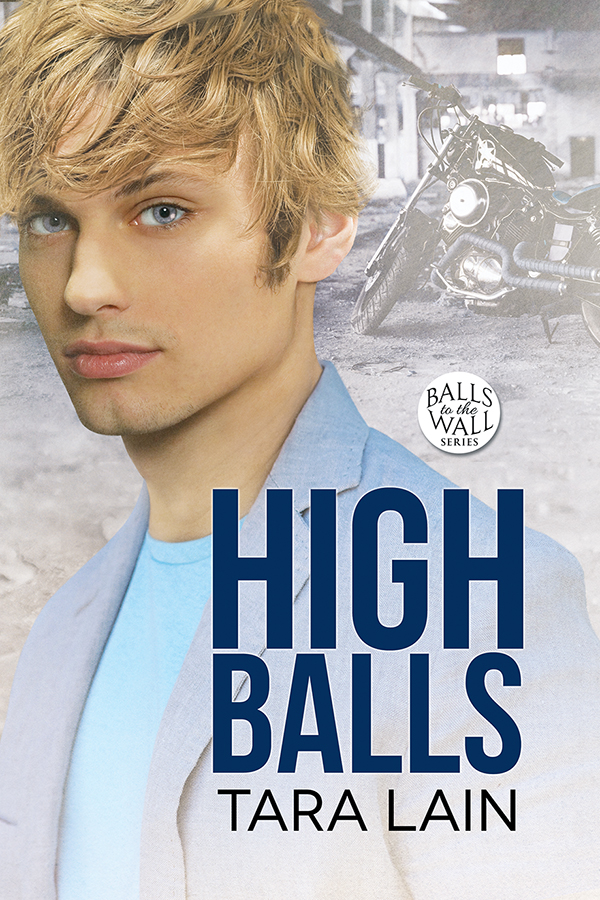 High Balls
(Balls To The Wall Series #6 )
by Tara Lain

Though only twenty-six, single father Theodore Walters lives with his head in the clouds and his feet firmly planted in reality. At the center of his life is Andy, his seven-year-old son, with whom he shares no DNA, though nobody—including his religious-fanatic in-laws—knows that, and Theodore will do anything to keep them from finding out. Theodore works hard to get his PhD and the tenure and salary that might follow to make a better life for Andy—but the head of his department thinks his dissertation on Jane Austen and romance novels is frivolous.

Theodore’s carefully planned life goes off the rails when he walks into a popular Laguna Beach bar and meets the bartender, “Snake” Erasmo, a pierced and tattooed biker who sends Theodore’s imagination—and libido—soaring. Snake has even more secrets than Theodore and couldn’t be a less “appropriate” match, but he might be the only guy with the skills to show Theodore that happily-ever-after is for real.

Snake looked in the mirror again. That was Pink Hair talking. Teddy stood beside the Greek statue and looked—scared? Anxious? Probably embarrassed. Why did he come here? To prance this beautiful man in front of me? He sighed. As if I’m all that.

He turned, tried to smile, and failed. “Yeah. What can I get you?”

“Champagne cocktail for me, darling.” Pink Hair smiled and gazed into Snake’s eyes. Did they know who he was?

Greek Statue asked for the same. Big, hunky, and handsome wanted a beer and—that left Teddy. Snake nodded to him without meeting his eyes. “What can I get you?”
“Beer, please. Uh, Snake, these are my friends.”

Startled at being addressed by name, he finally looked at Teddy. “I gathered that.”
“Uh, that’s Rodney, uh, Rod, and his husband, Hunter. Rod’s a famous painter and Hunter’s a college teacher like me.”

Snake still couldn’t get his smile muscles to move, but he stuck a hand across the bar and shook with both men, although the one called Rod only offered fingertips. Snake’s eyes fled back to Teddy.

Teddy glanced at the beauty next to him and said, “This is David. He owns the Underwood Galley on Forest. He’s Rod’s bestie. His husbands are away playing volleyball, so we’re keeping him company.”

Rod said in his dancing, musical voice, “You thought David was Theodore’s boyfriend, didn’t you?”

Snake felt the crease pop between his eyebrows and smoothed it with intention. “Looked like it.”

Teddy really frowned. “So you assumed I lied to you?”

“Thought crossed my mind.” He glanced up at the scowling Teddy Bear and almost laughed. “Sorry.”

Rod said, “Theodore, be reasonable. You two barely know each other. Snake might think you would lie to him.”

Snake shook his head. “No, actually, I don’t. Teddy here’s not the lying type. But….” He shrugged.

“Not usually. Let me get your drinks.” He turned away, but saw the Greek god David look at Teddy with wide eyes and mouth the word Wow.

He swallowed his chuckle as he added the bitters to the champagne and then pulled the beer from the cooler.

Rod had this funny wheedling voice. “So you call Theodore ‘Teddy’?”

Snake turned back with two of the drinks and flashed a smile. “Teddy Bear, actually.”

Teddy sat back on his stool. “Snake!”

“I mean, who could call that pretty thing something so stodgy and serious as Theodore?” He cast a sideways glance at Teddy.

David looked at Teddy too. “Uh, you better call him Theodore—because that bear can bite.” He laughed.

“Nah.” Snake slid the other beer and champagne to David and Teddy. “We need to get this boy to stop fighting what he is and work it.”

Rod shrieked. “Snake, I adore you! No one with an endless vocabulary could have ever so perfectly expressed the life plan for Theodore Walters.”

A wild giggle exploded through Teddy’s compressed lips. “You’re all crazy!” He shook his head. “What’s your last name?”

“Snake Erasmo. Your mother did not name you Snake.”

“Some friends. Something to do with the walk.”

Teddy rested a cheek on his fist. So damned cute Snake wanted to eat him. “What’s your real name?”

“It’s the only way to keep me from killing you for calling me Teddy Bear. I mean, aren’t all Teddy Bears portly and hairy?”

“Well, my teddy bears always made me feel good, and warm, like I had love curled up next to my belly.”

Teddy blinked hard. “Okay, but you still have to tell me your real name, or—else!”

Oh man, I could drown in those wide eyes. “Well, in that case, my name is Streams. Crystal Streams, to be exact. My hippie mama was into Native culture at the time I was born. Shit, it’s a good thing. The following year she might have named me Frankincense or—Marjoram.”

All four men laughed, but Theodore cocked his head with a quizzical expression. Hmm.

Snake held up a hand and walked over to the two guys who’d just sat down at the bar, took their orders, filled them, and then slowly sidled back to Teddy and company. Have to give these guys time to size me up, because I think my future depends on it.