Having Her Back by Ann Gallagher - Blog Tour with Giveaway 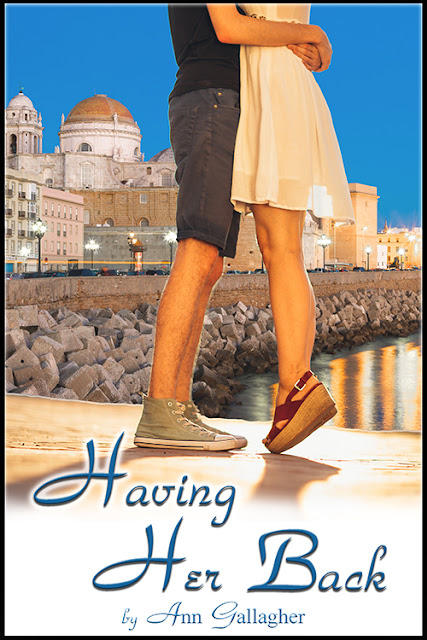 Trevor Larson is a Navy brat. He’s used to moving every few years, and thanks to social media, he can stay in touch with the friends he leaves behind. But shortly after he leaves Okinawa, his best friend, Brad Gray, cuts off contact and disappears.

Four years and two bases later, Brad resurfaces—and announces his family is coming to Trevor’s base in Spain. But a lot’s changed in four years, and Trevor is stunned to find out Brad is now Shannon. Their reunion isn’t quite what either of them had hoped for, but they quickly find their footing, both relieved to have each other back.

Except nothing is ever all sunshine and roses. The military is a small world, and there’s no keeping Shannon’s transition a secret. Parents warn their kids away from her. She can’t attend school on-base for fear of harassment or worse. And although her parents try to hide it, being ostracized by their only social circle while they’re thousands of miles from home is taking a toll on them too.

More and more, Shannon leans on Trevor. But she’s also drawn to him, and he’s drawn right back to her, feeling things he’s never felt for anyone before.

Trevor’s scared, though. Not of dating a trans girl. Not of damaging his chaplain father’s career or reputation. After finally getting his friend back, does he dare take things further and risk losing her a second time?

Ann Gallagher is the slightly more civilized alter ego of L.A. Witt, Lauren Gallagher, and Lori A. Witt. So she tells herself, anyway. When she isn’t wreaking havoc on Spain with her husband and trusty two-headed Brahma bull, she writes romances just like her wilder counterparts, but without all the heat. She is also far too mature to get involved in the petty battle between L.A. and Lauren, but she’s seriously going to get even with Lori for a certain incident that shall not be discussed publicly.