All Of The Above by Quinn Anderson - Blog Tour with Giveaway 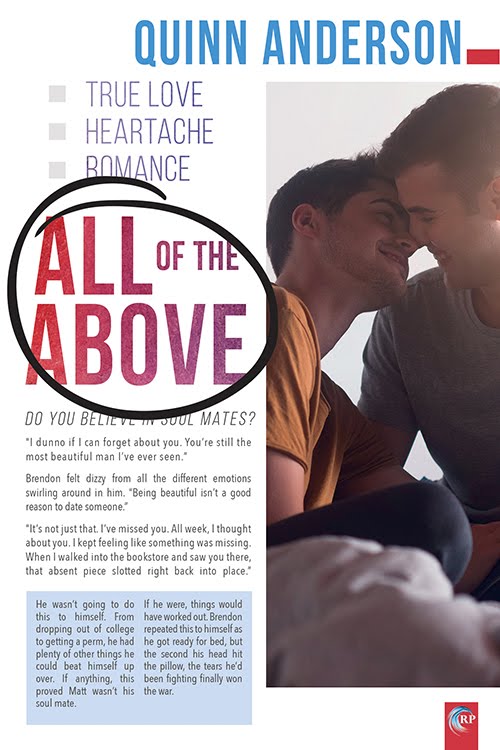 Thanks for joining me on my blog tour. I’m Quinn Anderson, author of the Murmur Inc. series, and I’m here to share some inside information about All of the Above, coming out November 20th. Stay tuned to hear fun facts about this novel, learn where I get my ideas from, and find out more about the characters. Leave comments on the tour posts for a chance to win a $10 Riptide Publishing gift card!

About All of the Above

Brendon isn’t in a rut, per se—he just always seems to be in-between things. Jobs. Degrees. Boyfriends. He never finishes what he starts. The perfect path is out there somewhere, and if he can just figure out what it is, he’s certain everything else will fall into place.

The last thing he expects is to meet his soul mate in the pages of a magazine quiz. “Who Is Your Perfect Man?” by Matthew Kingston seems like a road map to his future husband: the author himself. Brendon may not have his life figured out, but if Matt is as romantic as his quiz, Brendon can check “true love” off his to-do list.

When Brendon fakes a meet-cute between them, Matt proves to be as wonderful as he hoped. The more Brendon gets to know him, the harder he falls. But Brendon has a confession to make: how can he explain to Matt that he arranged their “fated” meeting? Brendon can’t tell if he’s found his soul mate, heartache, or all of the above.

To celebrate the release of All of the Above, one lucky winner will receive a $10 Riptide gift card! Leave a comment with your contact info to enter the contest. Entries close at midnight, Eastern time, on November 25, 2017. Contest is NOT restricted to U.S. entries. Thanks for following the tour, and don’t forget to leave your contact info!