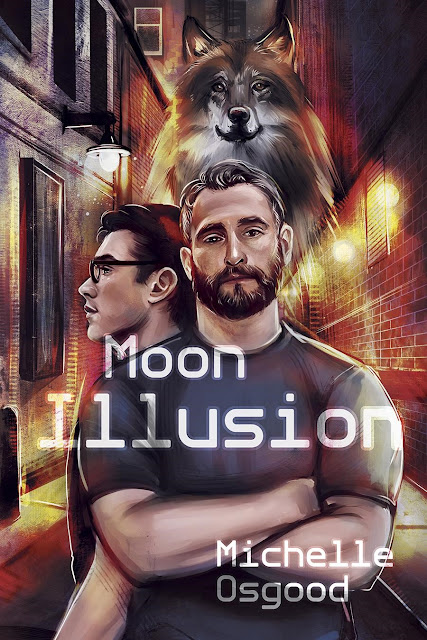 Nathan Roberts was just your average polyamorous librarian living in Vancouver until his best friend, Deanna started dating a werewolf. While hosting the small pack in his apartment while they hid from the underground network of Huntsmen, Nathan enjoyed a casual fling with Cole, the pack leader’s brother. But now, he may just be falling for him.

When his neighbor is murdered, Nathan is convinced the death is linked to the supernatural, but Cole and their friends deny any paranormal connection. This leads to a fracture of trust in their relationship, and Cole’s pack is left to deal with an unknown killer on the loose. As Nathan pursues answers on his own, he must come to terms with the truth, and his feelings for Cole.

“Did you sleep at all?” Deanna asked.
Nathan scowled behind his prescription sunglasses. He supposed he was grateful that Deanna had waited until after they’d left her apartment and her partner behind to pester him. Not that he didn’t adore Jamie, because he did—especially when she’d made them eggs Benedict for brunch that morning and swapped out the ham for avocado on Nathan’s—but some stuff was best friends only.
When Nathan didn’t answer immediately, Deanna sighed. She slipped her hand into Nathan’s as they headed toward the dog beach. Nathan squeezed her fingers and hefted her beach bag more securely over his shoulder.
When they left the sidewalk and hit the grass, Arthur quivered, straining against his red leash and matching collar. Deanna laughed and unclipped the leash. The second he was free, Arthur was off like a shot, across the grass and down the stairs to the beach. Nathan and Deanna followed at a more sedate pace.
“Ryn said she’ll meet us down there.” Deanna adjusted the wide brim of her straw hat. In a breezy sundress the color of daffodils, strappy white sandals, and large round sunglasses with matching white frames, she looked the picture of a lazy summer Saturday—in Hollywood.
Nathan looked much less put together in a pair of old shorts and a plain black T-shirt. Already he regretted the choice of color as the early afternoon sun beat down. He and Deanna had applied a generous amount of sunscreen before leaving her place, and Deanna had tucked the bottle in the bag Nathan carried so they could reapply it.
“Cool.” Nathan jogged down the cement stairs. He held out his hand to Dee once he reached the bottom; the final step was a weirdly uneven height above the sand. As he helped her down, he scanned the beach. Ordinarily Arthur was easy to spot, racing across the sand by the water, but this time Nathan couldn’t see him.

The beach was crowded, of course. Since this was one of the few dog- friendly beaches in Vancouver and Kitsilano was such a dog-friendly neighborhood, it looked as though everyone and their furred best friend had had the same idea as Deanna.
Nathan lifted a hand to shade his eyes as he and Dee walked down the sand. Ryn should have been easy to spot as well. An ex-lover from Kiara’s past, Ryn had been thrust into their lives on a wet night in February, when the drag show they’d been performing at, with Jamie, Deanna, and Kiara in the crowd, had been infiltrated by the Huntsmen. Nathan had seen Ryn perform as Terence Stallion, and his shock at having his friends show up at his apartment in the middle of the night, accompanied by his favorite drag king who was—surprise!— also a werewolf, had been quickly quashed by the announcement that the werewolves were being hunted and they needed somewhere safe to hide.
Somewhere safe was Nathan’s apartment, for days.
In that time, Nathan had had the chance to get to know Ryn: their pronouns she or they, a lone wolf with no pack to speak of, a genderqueer Korean-Canadian hair stylist with an attitude and stubbornness to match Kiara’s. Nathan found a lot to like about Ryn. When it was revealed that the Huntsmen were after Ryn because of their lone-wolf status, Ryn had agreed to join Kiara’s pack in a dramatic showdown with the Huntsmen that had taken place at Nathan’s workplace.
So now the werewolf pack that was somehow a part of Nathan’s life included Cole, Kiara, Jamie, Deanna, and Ryn. Nathan supposed Kiara would let him join, if he’d asked, but something held him back. It wasn’t distrust, exactly, but maybe discomfort.
Before Nathan could analyze that thought further, Dee tugged on his arm. “Found him,” she said and nodded toward the far end of the beach. Shaded and rockier, it was less crowded.
Arthur stood at the edge of the water, barking happily at another dog behind him. As the second dog emerged from the shadows, Nathan gave a start. No domesticated dog, the wolf that loped easily toward the golden retriever had a pale gray coat, nearly white, and was easily three times the size of Arthur.
Ryn.

Michelle Osgood writes queer, feminist romance from her tiny apartment in Vancouver, BC. She loves stories in all media, especially those created by Shonda Rhimes, and dreams of one day owning a wine cellar to rival Olivia Pope’s. She is active in Vancouver’s poly and LGBTQ communities, never turns down a debate about pop culture, and is trying to learn how to cook. Her novels The Better to Kiss You With (2016) and Huntsmen (2017) were published by Interlude Press.