The Pick Up by Allison Temple - Blog Tour with Giveaway 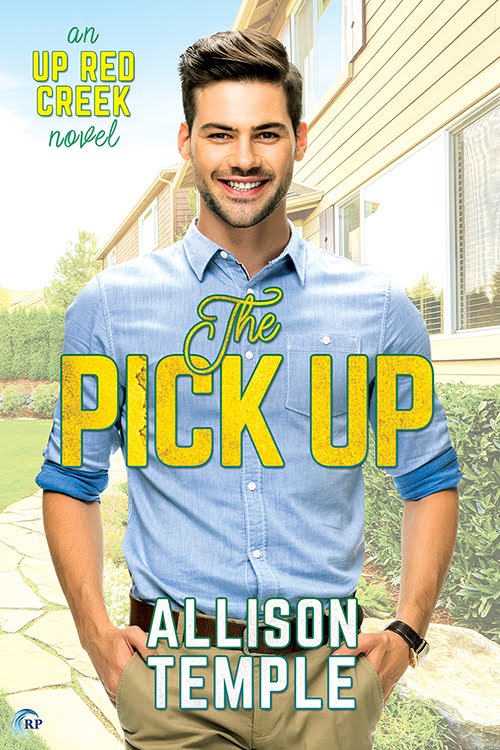 Welcome to The Pick Up’s blog tour, presented by Allison Temple and Riptide Publishing! The Pick Up is Book 1 in the Up Red Creek series. This cozy small-town romance tells the story of single dad Kyle, who moves back to his hometown with his princess-obsessed six-year-old daughter Caroline. He doesn’t expect them to stay long, until he meets Adam, Caroline’s too-hot and too-serious teacher.

About The Pick Up

Kyle’s life is going backwards. He wanted to build a bigger life for himself than Red Creek could give him, but a family crisis has forced him to return to his hometown with his six-year-old daughter. Now he’s standing in the rain at his old elementary school, and his daughter’s teacher, Mr. Hathaway, is lecturing him about punctuality.

Adam Hathaway is not looking for love. He’s learned the hard way to keep his personal and professional life separate. But Kyle is struggling and needs a friend, and Adam wants to be that friend. He just needs to ignore his growing attraction to Kyle’s goofy charm, because acting on it would mean breaking all the rules that protect his heart.

Putting down roots in this town again is not Kyle’s plan. As soon as he can, he’s taking his daughter and her princess costumes and moving on. The more time he spends with Adam, though, the more he thinks the quiet teacher might give him a reason to stay. Now he just has to convince Adam to take a chance on a bigger future than either of them could have planned.

Allison Temple is a romance writer from Toronto, Ontario. She lives with her very patient husband and the world’s neediest cat. Her debut, The Pick Up, will be published by Riptide Publishing in 2018.
Allison has been writing since the second grade, when she wrote a short story about a girl and her horse. Her grandmother typed it out for her and said she’d never seen so many quotation marks from a seven-year-old before. Allison’s fascination with the way characters speak and communicate with each other in novels has not diminished in the ensuing thirtyish years.
Despite living in Canada’s largest city for more than a decade, Allison’s fiction writing draws inspiration from her small-town roots. Originally from Brockville, Ontario, she knows what it’s like to live in a place where nothing is more than a ten-minute drive away, and you’ll see everyone you know on Saturday morning at the farmers’ market. Her first job was selling coffee and making sandwiches at a bakery that has been family owned for over a hundred years. She was once given an award for “most improved tomato slicer.”
Since that early professional start, Allison has been, at various times, an odor lab technician, environmental consultant, corporate proposal writer, and marketing manager. She fills her free time with writing, community theater stage management, and traveling to destinations with good wine.
Allison came late to reading and writing romance novels. She didn’t read her first one until she was twenty-six years old, but it has been a landslide since then. She loves LGBT romance for the stories it tells and the characters it brings to life. She is very excited to be joining the circle of passionate and talented authors in the genre, and credits Heidi Cullinan and Marie Sexton for introducing her to it.
Connect with Allison:
Giveaway

To celebrate the release of The Pick Up, one lucky winner will receive a $25 Riptide credit! Leave a comment with your contact info to enter the contest. Entries close at midnight, Eastern time, on March 10, 2018. Contest is NOT restricted to U.S. entries. Thanks for following the tour, and don’t forget to leave your contact info!