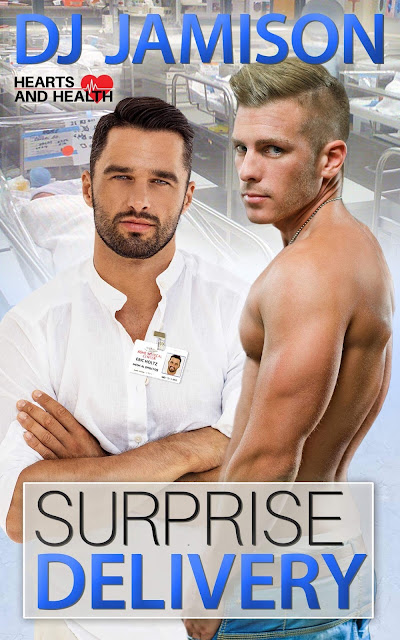 Dr. Casper Rollins knows how to have fun. The love of his life, Kage Myers, lived every moment to the fullest before he died. Now, Casper goes skydiving, mountain-climbing or on other adrenaline-soaked adventures when he wants to feel closer to his lost love.

Medical director Eric Holtz is married to his work -- so much so his husband left him. But when his niece shows up, pregnant and in need of an ally, Eric suddenly has family again. Unfortunately, her obstetrician, Casper Rollins, is sexy enough to turn Eric into a blushing adolescent.

What begins as a game to break Eric of his workaholic tendencies escalates into scorching sex and feelings that can't be ignored. Casper never planned to give his heart to anyone other than Kage, and Eric won't accept anything less.

If these two want a future, they'll have to embrace the lesson Kage taught Casper long ago: You only live once. 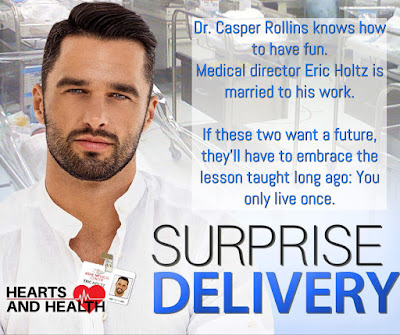 “This isn’t exactly what I had in mind when you asked if I wanted to have fun,” Eric said, gasping for breath.

Casper laughed, one hand clutching his stomach and his other gripping Eric’s wrist and tugging. Eric was having just a bit more difficulty than Casper in climbing from the top of a trash bin to a tree to the roof of the downtown library.

Thankfully, dusk had fallen, and they were on the backside of the library, where they were less likely to be noticed. He’d never live it down if he was arrested for loitering on the roof of a public property. It was hardly the kind of publicity a medical director needed to generate.

Eric finally heaved himself onto the mostly flat, asphalt roof with Casper’s assistance. He dropped down on his back and stared at a sky painted with the pink and orange streaks of sunset. The sun, still a molten ball in the sky, dropped slowly behind puffy clouds that were beginning to look more like cotton candy, all pink and soft around the edges.

Casper settled beside him, crossing his arms under his head. “It’s worth it now, though, right?”

Unlike Eric, Casper had jumped from trash bin to tree to roof with the agility of a teenager. Lying as he was, with his arms folded behind his head, his triceps bulged. Eric found that a prettier sight than the sunset.

“You know, the hospital’s taller. I have a key to the roof. We could have saved ourselves a lot of trouble and had a great view of the sunset.”

“You can just go up the stairwell and right onto the roof?”

“Yep,” Eric said, a bit smugly. “The helipad is up there, so there has to be access. It’s rare for us to receive a life flight, but it does happen.”

Casper made an obnoxious buzzing noise. “You’re venturing awfully close to shop talk, and besides, where’s the fun in walking up some stairs?”

“No ankles were broken,” Casper chastised. “Now look at that gorgeous sky and enjoy yourself.”

Eric reached out and traced a blaze of orange inked on the pale skin of Casper’s bicep. “I’d rather look at this.”

Casper twitched, but he didn’t pull away. His head swiveled, light blue eyes fixing on Eric. “They always like the ink,” he murmured.

Eric flushed and pulled away. Turning his eyes back to the sky, which was less blinding than Casper’s beautiful body, he asked what he’d always wondered. “Do they mean something to you?”

“It’s artwork imprinted on my skin, so yeah, it means something to me.”

Eric risked a glance. “Of course.” He tried again. “But sometimes people get tattoos because they like the art. Other times, there’s a deeper symbolism in them.”

“You want to know the story behind my ink?”

Eric nodded, his eyes back on the swirls of color he could see on Casper’s bicep. As he watched, Casper grabbed the back of his T-shirt and peeled it up and over his head, dropping it into his lap.

Eric’s eyes roamed Casper’s body, taking in the paleness of his skin and the tautness of the muscle beneath it. Casper sat at an angle, turned with his shoulder toward Eric, so the vivid turquoise and orange of his tattoo captured Eric’s attention before he could get lost in a full study of the man’s body.

“It’s a lizard,” he said in surprise.

The chameleon clung to a branch that curved along the shape of Casper’s upper arm, blending in and out of leaves that wound around the image. The chameleon, where it was visible, was drawn in a bold style, with vivid hues setting it off from the parts of its body that vanished into the artwork. Large eyes and a wide grin imbued it with a personality, reminding Eric just a bit of the Cheshire cat in Alice in Wonderland.

“It’s incredible,” Eric said, leaning closer to study it. The longer he looked, the more detail he could pick out, from subtly shaded scales to hints of the lizard behind the leaf work. “Chameleons change to match their surroundings, so what does this symbolize?”

Casper snorted as he grabbed his T-shirt and pulled it over his head. “Flattery will get you everywhere.”

As Casper lowered the shirt, a hint of ink on his back caught Eric’s eye. He put out a hand to stop the lowering of Casper’s shirt, leaning to the side for a look. Casper’s back was as gorgeous as the rest of him, broad and tapering to his waist with a muscle definition Eric could never hope to replicate in his own body. Casper was doing something right, even if was working out at the gym religiously like any self-respecting gay man. Eric, quite obviously, didn’t respect his body as a temple, unless it was as a temple that had crumbled to a pile of rubble.

“What about this one?” he asked.

He could just make out what looked like a hoop with flames around it.

To his surprise, Casper shifted away and tugged his shirt down firmly. “I didn’t bring you up here to talk about all my tattoos.”

Casper’s tone was light and teasing, but his eyes were guarded, and Eric didn’t want to ruin what had been a fun outing with an interesting guy. So, he flirted.

“I was kind of hoping you brought me up here for more than a pretty sunset.”

Casper settled back onto his elbows, looking up at Eric with a genuine grin. “Is that right?”

Eric licked his lips nervously, looking at the perfect male body stretched out before him. Casper’s shoulders stretched the fabric of his shirt, pulling it tight across his chest, and his jeans hugged his muscled thighs. Casper was without a doubt the most gorgeous man Eric had ever seen.

But it had been a long time since he’d made a move. Tentatively, he rested his hand on Casper’s stomach, feeling his ab muscles tighten at his light touch.

“Does it?” Casper asked with an impish grin. “Maybe we should test it out.”

“Definitely,” Eric said, before leaning in. “But fair warning? I’m out of practice.”

“It’s just like riding a bike,” Casper murmured before their lips met in a kiss. It was soft, sweet. Tentative, because Eric was too timid to plunge his tongue in and taste Casper, no matter how much he wanted that.

Eric lifted his head, needing a moment to get his bearings after his first kiss in far too long. “That’s not at all like riding a bike.”

Casper laughed, eyes crinkling up. “You call that a make-out? Get back here.”

He slipped his hand into Eric’s hair and pulled him into a longer, deeper, wetter kiss. Casper eased onto his back, lying flat on the roof, and pulled Eric down with him. Even though Casper was the one pinned to the rooftop, he took control of the kiss, flicking his tongue playfully and nibbling at Eric’s lips until he opened up.

Eric smoothed his left hand over Casper’s chest and stomach, reveling in the firmness of the muscled body beneath him. Casper was young, gorgeous and incredibly fit. Way out of Eric’s league. But for some crazy reason, Casper liked him.

DJ Jamison worked in newsrooms for more than 10 years, which helped tremendously when she began her series centered on The Ashe Sentinel, a fictional small-town newspaper in Kansas. She lives in the Midwest with her husband, two sons and three glow-in-the-dark fish.