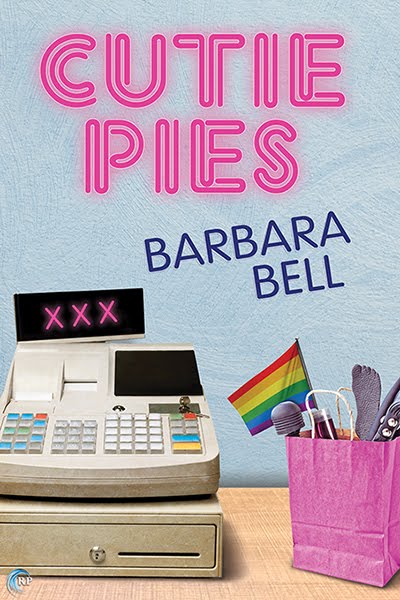 Hi, I’m Barbara Bell, romance author extraordinaire, and welcome to the blog tour for my debut novella Cutie Pies! Over the next week I will be travelling the internet sharing some thoughts on my book. Follow along and join the discussion!

Joey works at Cutie Pies, the smallest adult store in Sydney. After his parents kicked him out years ago, the haphazard shop became his home away from home and is the only place where he can embrace his queer, quirky, and—okay—sometimes a little awkward self.

Joey can’t stop thinking about him, and Mick’s continued visits to the store make him even harder to forget. Mick is shy and sweet, but also secretive and uncertain. As the two grow closer together, Joey starts to wonder what Mick really wants from him, and whether he can risk falling in love with someone who might not be free to love him back.

Coming Out of the Closet… as a Writer?

I came out of the closet when I was fourteen to a girl I was not-quite friends with during PE class. It was an overcast day and we were sitting on the edge of our school’s rundown tennis court, watching the more enthusiastic students play while we pretended our rackets were guitars. Then, in the middle of the conversation – as if it was an afterthought and not something I’d spent days practising in the mirror – I told her I was bisexual.

She asked some questions. I answered them.

And just like that I was out of the closet.

In the months that followed I came out to more people including (eventually) my brother and then my parents.

At the time I wasn’t connected with any queer support groups, either online or in real life. I didn’t know what the rainbow flag was, how dangerous coming out could be, or (truthfully) what it all meant. I just knew I liked boys and girls and that ‘bisexual’ was the word for that.
Nevertheless, coming out was frightening, not because I thought there was anything wrong with being queer, but because I was scared of being scrutinized and rejected. Or, even just being thought of as weird.

Which is kind of what I feels like to be a writer.

There is nothing wrong with being a writer… but it’s still scary to admit. It’s scary to put your work out there for other people to judge. It’s scary telling your friends and family that you’ve written a book and now you’re trying to publish it. It’s scary realising people you know are going to read what you wrote and that it may alter their opinions of you.

It’s scary coming out of the closest as a writer.

But it’s also exciting. And revealing. And all those things coming out of the closet should be.
Which is why these last couple of months, in the lead up to the release of my debut novella, I have been making an effort to tell people that I am a writer. A queer romance writer to be specific. And, just like when I was fourteen coming out of the closet I’ve received a lot of encouragement, a lot of awkward questions, and a few (let’s just say) raised eyebrows. But that’s okay.

What about you? Are you an out of the closet writer? Or is writing a slightly embarrassing secret? Let me know in the comments and don’t forget to leave your contact details for a chance to win an ecopy of the book. Also, check out the rest of my book tour to learn more about me, my thoughts on writing, and my debut novella Cutie Pies.

Barbara Bell grew up on a sheep farm in rural Australia, moved to Brisbane when she was nineteen to study film, and now lives in Sydney with an ever changing cast of housemates and a colony of bees.

She is an avid traveller, a proud geek, and loves telling stories about human relationships and how strange and silly (but also beautiful) they can be. She began writing when she was eleven years old and believes it's probably too late to break the habit now.

To celebrate this release, one lucky winner will receive a copy of Cutie Pies! Leave a comment with your contact info to enter the contest. Entries close at midnight, Eastern time, on March 24, 2018. Contest is NOT restricted to U.S. entries.