One of the unfortunate truths in life is that if someone dumps a war on your doorstep in the small hours of the morning, well, you’re kind of stuck with it. Especially if that war comes in the form of a mostly naked man and he just happens to be one of the most powerful beings in the city.

Another unfortunate truth: No matter how poorly things ended, you’re going to wind up scraping him up off the cement and dragging him in off your doorstep. And, of course, that’s when the real trouble begins.

Chapter One: The Ex
The day started out normal.

The dawn sky had been clear; I had my study’s window cracked open while I worked because of the heat. The glass warding chimes my mother gave me sat in the kitchen throwing colored shapes all over the floor while I reviewed schematics at my desk. Outside, there was nothing but the orange glow of the streetlamp and the lightening horizon.

Not ten minutes before six, clouds rolled in, blotting out the moon, leaving me in the anemic light of the candles guttering from the wind. That was when my wards started screaming bloody murder, shooting bright yellow lines of alarm along my walls, ceiling, and floor. The chimes spun violently even though there was no wind. Drama queens. Although considering who they told me was at my doorstep, pounding on the door—well.

I thought I knew what to expect when I opened the door, and I dragged my feet as much as I could. I paused to disentangle my leg from the blanket that fell off my half-collapsed couch instead of just kicking it off, and even went so far as to ball it up and throw it on the armchair. I considered watering the dried hunk of fern that rested on the table. I had no desire to see my ex any time soon, much less at six in the morning.

I slammed the door open. “What do you want?”

What I did not expect, however, was for him to fall forward as soon as I opened the door, hitting the foyer floor with a thud and splattering my bare feet with what looked like blood. Lucky the landlord was too cheap to buy carpet—much easier to clean questionable fluids off concrete.

My entire living room blazed with yellow, making him look even more sickly.

He sat up and snarled, “We have to get out of here.” Most of the blood wasn’t his, but he was hurt worse than I’d thought, bruises already forming on his torso and limbs. A giant handprint wrapped around his neck.

There was something else, though, in my home. Something that didn’t quite belong there, though it wasn’t malicious or it would have been expelled. No, it was powerful but passive enough to go through my wards and not set off any alarms. Its presence felt like a strong pulse. Warm.

Something slammed against the wards on my doorway. Claws groped through the opening, piercing the thinner webbing but catching on the main lines. The wards screeched, flaring purple and sparking. I could feel everything my wards touched in a way. It wasn’t precisely the same as touching it myself, just sort of a muted sensation depending on how much magic the thing had. But Salim was almost bursting with magic. And so was the thing fighting against my wards now.

For a moment, I froze. It wasn’t like I was accustomed to seeing demons on a regular basis and this was one ugly motherfucker. Some demons can look human—better than human—but this…was not one of them.

“Cal!” Salim grabbed hold of my shoulders, shaking me.

With a twist of my hand, I tightened the wards on its claws, managing to sever one of its fingers in the process. Immediately, my wards absorbed its blood, lines of runes shooting back and forth between them as they started breaking the material down to find a weakness. Losing that bit of itself didn’t even give the demon pause. It threw itself against the entrance again, this time using its teeth. I spread the net of the ward lines apart this time, forcing its jaw wide. Too late I realized that it was preparing to spit venom at us.

The liquid writhed against my wards, hissing and finally oozing—hurtling forward as it ate through the gaps. In a last-ditch effort, I pulled my wards back like a slingshot and sent the entire glob back at the gaping maw with one huge heave.

The wards finally finished processing and started wrapping around the demon, immobilizing limb after limb, and set to absorbing it, which was a bit like eating fiery shards of glass, only less pleasant. They were, after all, an extension of my power, so I felt every second of the absorption process.

Sidestepping spots of the venom where they had gotten past the wards, I went to go grab my staff. Without a conduit, using magic was like trying to grapple with lightning. Kind of like talking to Salim. He was a lot more pleasant to be around when he was passed out.

Several lines of the wards gathered along my staff as I picked it up from beside the coat rack. The thing let out an ugly roar.

“What are you doing, Cal?” Salim asked.

“That’s not going to work!”

“Isn’t that why you came here? Now shut up!”

“The Court is dead!” Salim said.

The wards had started strangling the demon; its blood smelled like battery acid. Its eyes bulged as it fought to let off another roar and struggled against the wards.

“You’re as bad as Salim in one of his moods.”

It thrashed to let me know just what it thought about that. This time when the blood hit the wards, it was launched back at the demon. The wards might be able to handle it on their own, but it was time to give things a little push.

“Batter up, motherfucker.” Swinging my staff with my whole weight, I hit it right on the schnozz. I felt the lines take, ramming into its head like hooks and sending out spines to prevent it from pulling free.

“Cal, you fucking dickweed,” Salim said. “Don’t compare me to that thing.”

I spun around to look at him, just in time to see the demon’s claws shoot past me toward Salim, who was holding something in his hands. Something that felt like a heartbeat that thrummed through my entire living room.

I shook my head, trying to get rid of the lights dancing in my vision. The demon was little more than a smudge on my doorstep. I foresaw a great deal of scrubbing the next day.

Outside, the sky rumbled and buzzed with electricity. All the hair on my body stood on end.

“Salim…was that you?” He was never that strong before. The most he could do was call up a strong wind or two, or a rain. Not call down lightning.

“Bastard,” he wheezed, collapsing at my feet.

And that was when the storm broke. 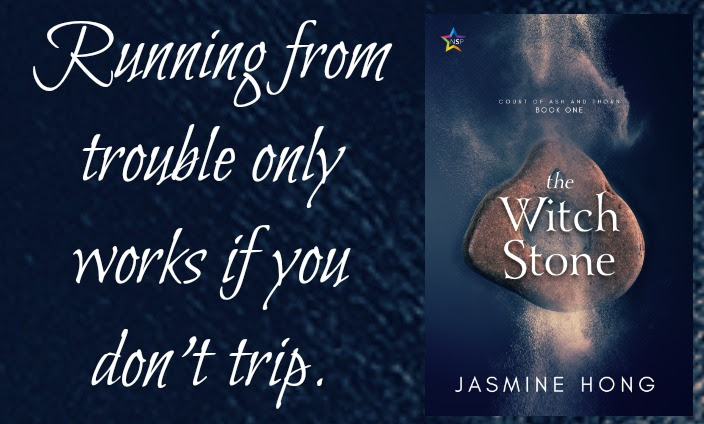 
Jasmine Hong lives in a sweltering suburb of sunny Southern California. She has a tiny dog with giant ears. Her hobbies include eating and sleeping. When she isn’t doing either, she’s usually writing, drawing, or coding. Jasmine wants you to know that you can, and should, fry cheese. It’s delicious. Try it.

As much an omnivore when it comes to reading as eating, she wishes there was more variety in her literary diet. She writes everything from urban fantasy to silkpunk and wishes she could just read her stories instead of having to write them.