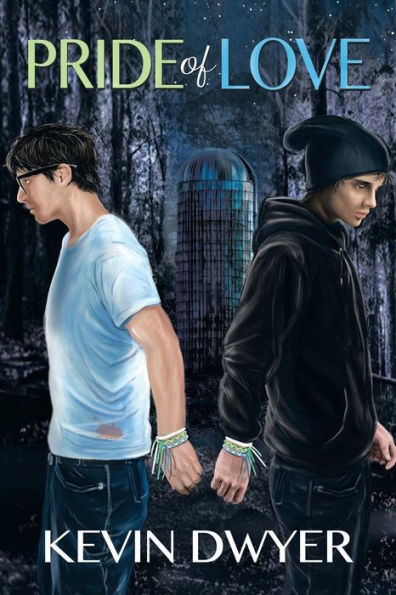 Twenty-five-year-old Jesse Coleman endures a heinous act on him. After the case is dropped, his mother, Claire, accedes to his request to move. Leaving behind his old life, he is left with a disturbing scar on his back. Hopelessness comes in on him and he takes off the bracelet that he has worn his whole life, which means something to him. Looking for a new beginning, Jesse who dresses differently meets Jaden who dresses like an outcast and the two fall in love with each other. With love from their mothers and good friend Liz, they try to bury their pasts behind.


The talk show host woman sits on the stage with a fancy couch alongside her with a mother and young grown-up son. The supervisor with the headset on counts down from five to one with his fingers, and the cameras go live. There is audience applause and then a pleasant smile comes on the host's face. "Thank you for tuning in on the Tina Live Show. I'm Tina and my guests today are Claire along with her son, Jesse Coleman." Tina sets her attention on Claire and Jesse. "Thank you for joining us today."
"Thank you for having us," Claire replies back with a smile, then looks at her son, Jesse. She slides Jesse's brown hair bangs to the side from his forehead. "You comfortable being here, sweetie?"
Jesse sets his focus on Tina, who is looking on with the smile diminishing away. "Yea . . . I'm all right," Jesse says.
Tina takes a moment and gathers words to say, then looks at the audience looking on in their seats. "About a year and a half ago, Jesse Coleman was attacked from behind in a wooded area. He was beaten and his back was cut open. Basically, he was left for dead. What's so horrifying about this attack is that the cut on the back spelled a word." Tina looks over at the two sitting right across from each other.
A nod comes from Claire's head, like she's reliving the day. "Yes, the cut spelled out a word. It was not a cut in his back . . . more like a butcher does. My son's back had to be stapled shut."
Tina puts her attention on Jesse. "I'm so sorry that happened to you. You're a strong man to live from that."
"Yea . . . ," Jesse replies back; he is wearing plain clothes with brown shaggy hair covering his head. "Others say that I cheated death."
"How old are you?" Tina asked.
"I'm twenty-six, but I was twenty-five when I was attacked."
Tina looks around his arm area. "Can you explain what that bracelet you have on means?"
Glancing down at his arm, Jesse lifts up the arm and shows a blue, white, and green sown bracelet with "Pride of Love" stitched in black in the colors. "Pretty much means take pride in yourself and love yourself." Jesse sets his eyes on Tina through his glasses. "I'm gay, and that is the little thing that defines me. I was attacked for being who I am. Wasn't bothering no one. Just kept to myself."
Tina looks over at Claire with a blank stare down. "You all right, Claire? Looks like it's hard to talk about." "Yea, I'm fine. After the first court hearing, it was best to leave and start over and I'm thankful for that."
"How did you deal with the attack? I'm a mother of two," Tina tells Claire. "I mean it had to be tough on you, emotional wise."
"Hope . . ." Claire wipes her eyes with fingertips. "Jesse found what he needed when we moved. Found someone that understands him. Small world, don't you say?"

Kevin Dwyer self-published his first novel called Pride of Love in the year of 2014 in which it got an overall of 3+ star on BarnesandNoble.com and Amazon.com. Kevin rewrote the novel into a screenplay and was a finalist in the Tea Dance screenwriting contest and one of the top 5 winners in the 2016 International Las Vegas screenwriting contest (winner in LGBT category.) Pride of Love was a February Platinum Award winner in 2018 for best screenplay in the Mindfield Festival.