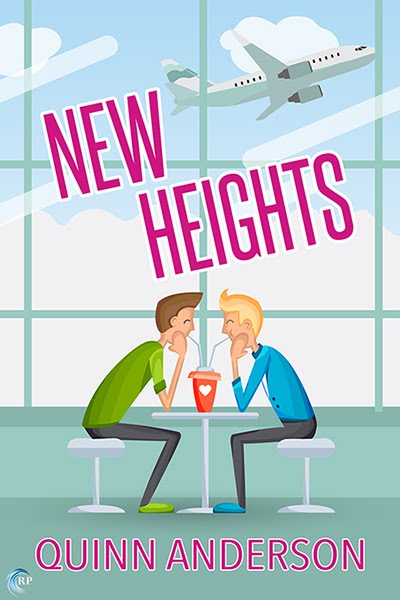 Thanks for joining me on my book tour! I’m Quinn Anderson, author of the Murmur Inc. Series and On Solid Ground. I’m here to share some inside information about New Heights, coming out March 12th, including fun facts and more. Leave comments on the tour posts for a chance to win a $10 Riptide Publishing gift card!

After attending a friend’s wedding in New York, James Thompson is eager to go home, even though no one will be waiting for him at the gate. He has no expectations for his trip back to Charleston other than long lines, security, and bad airplane food. But when an annoying—albeit hot—stranger cuts him in line, James is determined not to be a pushover for once.

For Mika “It’s Mee-kuh, not Micah” Bailey, today’s just another day of boring work travel. That is, until his flight gets delayed, and some irritating (but handsome) guy keeps hogging all the good power outlets. Which means war. In the middle of an airport. In New York. What could go wrong?

Eventually, they declare a truce, and as they get to know each other, their attraction overwhelms them both. Terrified of what he’s feeling, Mika suggests a no-strings hookup, but serial-monogamist James wants more. If they don’t fight for what’s right in front of them, their romance might be canceled before it ever takes off.

I’m going to start this blog entry off with an odd statement: Facebook thinks I’m pregnant. Why, you ask? Because every time it advertises lists of trending baby names, I click on them. So by now, Facebook algorithms have decided I must be having a baby, and lists of names are all they advertise to me. Well, that and all sorts of baby supplies. I’m twenty-eight and have no children, so needless to say, this is a mixed bag for me. I really shouldn’t know as much about crib style as I do.

It was on such a list of baby names that I found the name Mika, pronounced Mee-kuh. I can’t say why, but I fell instantly in love with it and knew I wanted to use it in a book. But since it’s a name that’s easily confused with Micah, pronunciation-wise, I had to save it for a book where one of my characters would have good reason to pronounce their name, or have it incorrectly pronounced by strangers so he could correct them. Hence, New Heights was perfect, since airports require you to identify yourself multiple times. Hell, I even managed to work the pronunciation into the plot. Enjoy!

I was informed by my betas after I finished writing the book that there was a British singer named Mika years ago. Because of him, they already knew how the name should be pronounced, but I’d never heard of him. So, in case you were wondering, my Mika was not named after that Mika, ha ha.

My other main character, James, was named after a dear friend of mine. They look nothing alike, except they both have beautiful blue eyes. But their personalities have one thing in common: they’re hopeless romantics. And I love them!

To celebrate the release of New Heights, one lucky winner will receive a $10 Riptide credit! Leave a comment with your contact info to enter the contest. Entries close at midnight, Eastern time, on March 17, 2018. Contest is NOT restricted to U.S. entries. Thanks for following the tour, and don’t forget to leave your contact info!