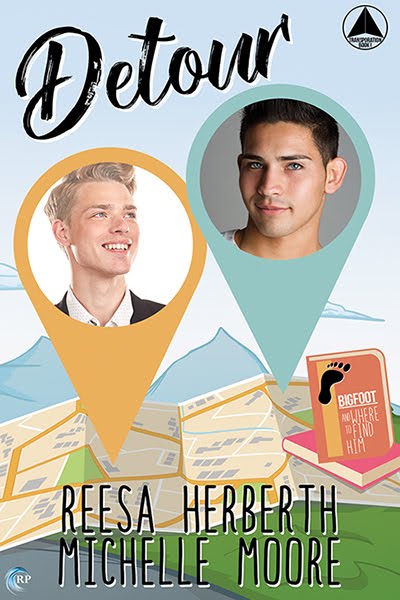 We’re Michelle Moore and Reesa Herberth, and if you know our writing, you probably know that we’ve won awards for our science fiction and mystery romance.  (That was the same book, for the record.) What you might not expect from us is a New Adult rom com… but that’s exactly what our new book, Detour, is.  Sort of.  Mostly? Definitely, yes.

Detour is the book of our heart.  It’s a story we’ve always wanted to tell- and one we’ve been telling each other, in some fashion, for as long as we’ve known one another.  It’s pretty funny in some places, and sad in others, and delightfully quirky throughout. It’s the story of Ethan and Nick, two strangers on a summer road trip.  One of them is running from ghosts, and the other is looking for them. Somewhere along the way, they find themselves in love, and in possession of a plush Titanic.

But not necessarily in that order.
About Detour

Ethan Domani had planned the perfect graduation trip before tragedy put his life on hold. Smothered by survivor’s guilt and his close-knit family, he makes a break for the open road. He doesn't know what he's looking for, but he's got the whole summer to figure out who he misses more: his boyfriend, or the person he thought he was. It’s just him and his memories . . . until he almost runs over a hitchhiker.

Nick Hamilton made some mistakes after his younger brother died. His violent ex-boyfriend was the most dangerous, and the one that got him shipped off to Camp Cornerstone’s pray-the-gay-away boot camp. His eighteenth birthday brings escape, and a close call with an idiot in a station wagon. Stranger danger aside, Nick’s homeless, broke, and alone. A ride with Ethan is the best option he’s got.

The creepy corners of roadside America have nothing on the darkness haunting Ethan and Nick. Every interstate brings them closer to uncharted emotional territory. When Nick’s past shows up in their rearview mirror, the detour might take them off the map altogether.

Detour: a Book Twenty Years In the Making

Hi, Reesa here.  My first exposure to doing the kind of writing I really wanted to do was unstructured roleplaying in a chat room, back in the yonder years of the internet.  Back when it was important to get into the right neighbourhood on Geocities.  Back when my mom sometimes picked up the phone and killed my connection.  Roleplaying taught me all kinds of things, like how to justify staying up all night to find out what a character would do next, how many ounces of soda I needed to accomplish that feat, and exactly when the MuchMusic block would play my favourite songs in the middle of the night.

And then I got fan mail.  This awesome woman who got to work early on the East Coast would scroll back through hundreds of posts every day to read the ongoing RP I was involved in (with my kickass friend, Shan).  We started talking, once I determined that, heeeey, to get a job, I was actually going to need to rejoin the world of the daywalkers and our schedules actually crossed a bit.  Our friend Shan started her own RP room, and Michelle and I created characters for her near-future setting.

Their names were Nick and Ethan.  While they were vastly different version of the characters who hit the page in Detour, some things never change.  Nick has always been on the outs with his parents.  Ethan has always been a dandelion child- sunshine sprouting up no matter where he’s planted.  Ethan and Nick have always loved each other.

In some ways, I think twenty-plus years of history made it harder to finally commit them to a definitive story.  We had to keep the current versions of them consistent, and let go of a lot of our favourite bits of their other incarnations.  In the end, I think we wound up with two characters who feel like they’ve known each other for years, but without the perils of instalove.  Knowing all their ins and outs should have made it simple to write this book, but Nick and Ethan surprised us with every chapter.

Detour is a book that was twenty years in the making for us.  It’s the culmination of a story we’ve told each other for so long that it became part of our story.

Reesa Herberth grew up in Hawaii, tried Arizona for a few years, and eventually settled in the D.C. area, where they have trees and rain.

She’s held a variety of crazy writer jobs, including book and video store manager for a defunct chain of music shops, office goddess for an artisan ice cream maker, cheese-cup scrubber at an organic goat dairy, high school secretary, and dye-stained proprietress of a small yarn and fiber business.

When not writing, she can usually be found reading, gardening, cooking, or spinning yarns of another sort entirely. She often resents her need for sleep.

With Michelle Moore, she is the author of the Ylendrian Empire books, including The Balance of Silence, the award-winning space opera caper, The Slipstream Con, and Peripheral People, a sci fi thriller with psychics and squishy feelings, coming soon.

Michelle Moore has a well-documented obsession with travel, television, frappaccinos and flamingos. These, however, come in a distant second to her love of writing. Most evenings she can be found huddled over her laptop at the local Starbucks, dividing her time between actually writing and pretending to be a barista.

While Michelle would like to claim child prodigy status, the truth is that she’s only been scribbling words on paper since she was six.  However, she’s moved beyond those initial Dick and Jane story knock-offs to the Ylendrian Universe, a much more rewarding and enjoyable choice of subject matter.

To celebrate the release of Detour, Reesa and Michelle are giving away a $20 gift card to the Ripped Bodice! If the winner is outside the US, it will be a $20 Amazon gift card instead. Leave a comment with your contact info to enter the contest. Entries close at midnight, Eastern time, on May 12, 2018. Contest is NOT restricted to U.S. entries. Thanks for following along, and don’t forget to leave your contact info!