His Wildest Dream by Xander Collins - Book Blast with Excerpt 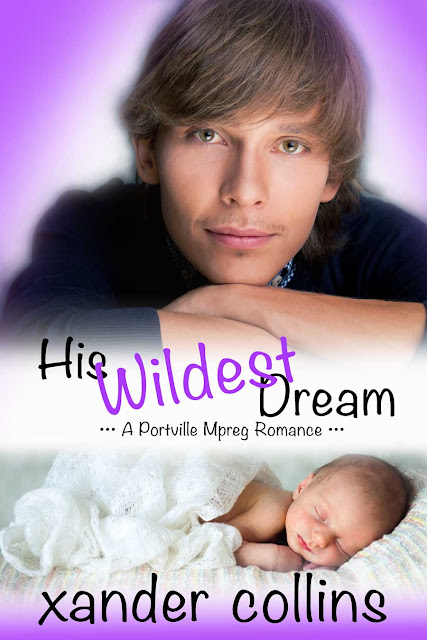 It is a standalone with a HEA in a series.

When Daniel goes into a debilitating super-heat while delivering a package to the office of one of the wealthiest men in town, he is horrified. It’s not like any other heat he’s had before, and he finds out it could have been caused by some very compatible pheromones.

Those of billionaire Cameron Styles.

He can’t fathom that Cameron could be interested in a young, poor omega like him, but when he’s asked to move into Cameron’s penthouse condo, he can’t turn down the chance to live out some of his dreams.

Cameron has hidden himself away in his penthouse ever since his omega partner was killed in an accident. He has made sure to not come into contact with anyone who might set off his powerful alpha hormones, or touch his heart.

Until Daniel walks into his office, that is.

After Cameron inhales Daniel’s scent and sees the sweetness in his eyes, he can’t get him out of his mind. But he’s afraid of love and pain, and most of all, of scaring an innocent omega with his depraved desires.

Can two people from different backgrounds let go of the pain in their pasts and come together to find the love they’re searching for?

His Wildest Dream is a Cinderfella-style romance of 46k words. It includes a May/December relationship between a sweet, virgin omega from a poor part of town and a reclusive billionaire single dad, and is served up with a big side of kink.

It is a very sweet, incredibly hot mpreg romance with kids, babies, a lavish wedding, and a super-HEA that will have you smiling from ear to ear. 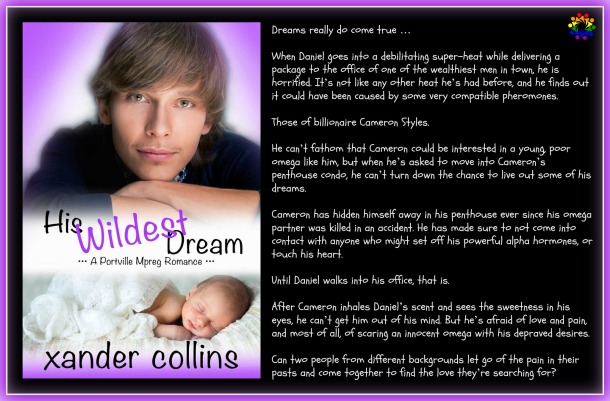 Suddenly, that distinctive scent that was in the air when I walked into the office completely surrounded me like a warm, fuzzy blanket. The deep, rich woodsy scent with the touch of sweetness and coziness felt like it was closing in on me and whisking me away. I could feel the scent swirling around me, as if it were something real that I could touch. The scent tickled my skin and moved against it softly, causing every hair on my body to stand on end.

But that wasn’t all that was standing on end. I was suddenly rock hard as that incredible scent entered me. It was so overwhelming and distracting that I couldn’t remember where I was or what I was doing there. I could barely stand up straight, so I moved over to the glass desk to steady myself.

I’d never experienced anything like it in my life. I felt hypnotized, not only by the overpowering scent of the man who had just entered the room, but by his piercing eyes. It was as if I’d fallen into darkness and the light in his sea blue eyes was the only thing I could see at the end of a tunnel. An incredibly strong feeling of longing inside me tugged at my heart, urging be toward the light in those eyes.

It felt like we’d both been standing there staring at each other for hours, but really it was probably just a few seconds. I saw the alpha’s mouth moving but I couldn’t make out what he was saying. His eyes were the only thing I could focus on. They were so bright and sharp, and I wanted to do anything and everything they told me to do. And I swear, the alpha’s eyes were telling me to come to him.

I kept thinking, Just take me now. Please, take me now.I couldn’t move my mouth to form the words, so I just pleaded with my eyes. I begged him to take me right there and then. But he didn’t. My brain screamed NO!when he turned and walked back through the door.

In my haze I heard the woman say, “Yes, Mr. Styles,” then felt I hands squeeze both of my arms.

That was Cameron Styles? The alpha that had just left me in this state? I repeated his name over and over in my head, and each time I said the words, a wave of tingles flooded through me. I finally realized the woman was still gripping my arms and it took every ounce of strength I had to look away from the closed door where he had disappeared.

“Are you okay?” the woman asked. “Do you need a glass of water?”

When my eyes finally moved so that they were looking at hers, I snapped back to reality—or as close to reality as I could be in that moment. I suddenly realized there was sweat pouring down my face and back and my mouth had gone completely dry. 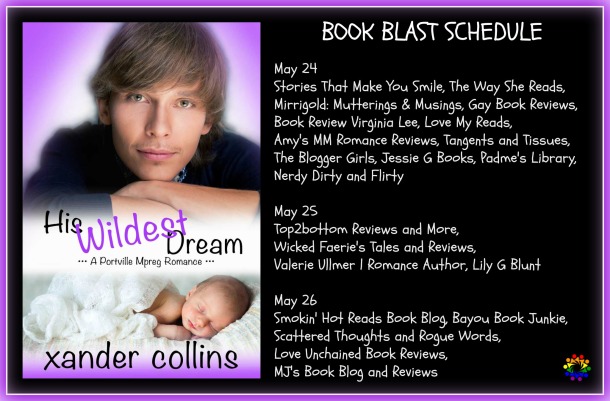