This is a standalone book.

As a farmer Lee Johnson is well-situated to survive in the aftermath of a plague that killed most of humanity. As a gay man in a small community he's resigned himself to the probability of lifelong bachelorhood, at least until his sister returns home with handsome Army veteran Nate Schlessinger.

Sparks fly between the two men but nothing is easy following the collapse of civilization. Nate claims to be celibate despite his clear interest, Lee tries to keep his neighbors from starving, and the threat of attack looms constantly. Can love triumph in the ruins of the world as we knew it? 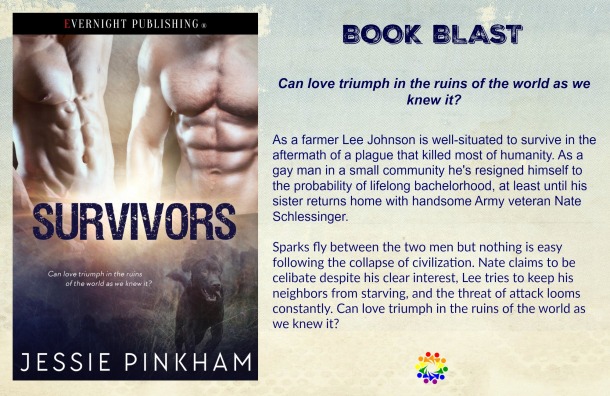 Nate looks skeptically at the carrots he pulled up. “Are these carrots supposed to be yellow?”

“How many colors do carrots come in?”

“We grow yellow, orange, and purple, but there are red and white too. White carrots don’t have much flavor so I don’t see the point.”

It’s a nice morning for harvesting. Nate and I are working on carrots while Lily is one field over gathering onions. Every couple of minutes the wind carries over a few words of whatever song she’s singing to herself. The dogs are amusing themselves playing tug of war with a piece of rope I knotted for that purpose.

My shoulders are a bit stiff from helping Stan move yesterday, therefore I’m not harvesting carrots quite as quickly as I could. The fact that Nate is new to pulling carrots is a convenient excuse to slow down. It’s not a difficult concept to yank carrots out of the soil and Nate’s doing a fine job, though he’s the first person I’ve ever seen harvest carrots with a handgun holstered on.

“Yellow and purple carrots. Orange tomatoes. What next,” he asks, “red pumpkins?”

The orange tomatoes were an heirloom variety Mom decided to try this year which are worth growing again. I’ve saved a good amount of seeds, plenty for us and the neighbors. Genetic diversity in crops will serve us well.

“The pumpkins are all orange.”

“Getting up every morning to take care of the animals isn’t consistent enough for you?” Livestock guarantees a certain level of routine in our lives.

“Farming is good for that.” I make sure I’m quiet for my next question, something that’s been nagging me. “Do you think we have a good chance of defending ourselves?”

“It depends on a lot of factors. We have the advantage over a small, maybe mid-sized gang unless they have really impressive weapons, but we can’t hold off an army. Fortunately, I think small gangs are more likely at this point.”

“Have I mentioned that my dad kept his great-great grandfather’s Civil War sword? It’s in the chest in the living room.”

“Let’s hold that as a last resort, okay?”

“Works for me. Damned if I know how to use the thing.”

“Now, a Civil War cannon might have more potential.”

“I think we’re stuck with the bows.”

“On the plus side those don’t run the risk of blowing up in our faces.”

“That’s a very big plus,” I say. Nate has his first homemade bow complete now, though it doesn’t shoot very far.

“Our biggest advantage, I think, is that I can probably shoot people as they approach. The military helmets will help a lot there.” He ignores the carrots in favor of looking at me, all weighty responsibility. “I’m going to do everything I can to protect us, to protect you and Lily.”

I demonstrate my appreciation with a kiss. “Thank you. Just remember you’re not doing it single-handedly, okay?”

“You’re a decent shot. That will help.”

He’s being generous. I’m a decent shot at close range with a slow-moving target, and my abilities degrade from there. Like I said, I went bird hunting with my dad sometimes, but it was never my favorite and that shows in my skill level.

“Lily can shoot too,” he says. “Even if she’s not a great shot it will create more chaos and give them more bullets to dodge.” Guns aren’t her favorite, but there’s no doubt she’ll do whatever is necessary. “I think we’ll be alright, barring some property damage.”

“I hope we’re alright. And that any property damage is minor.”

“I’m not going down without a fight,” he says, which I already knew. Nate’s just like that. “I’m happier than I thought I could be after Severny destroyed everything. Not that it isn’t hard, and I don’t miss people all the time, but somewhere along the way I realized I need to let myself be happy, you know?”

“Yes.” I really, really do. It’s easy to fall into survivor’s guilt until you realize that nobody who died would want us to spend the rest of our lives miserable. That doesn’t mean I don’t have my bouts of survivor’s guilt all the same. It does make it easier to move forward and feel okay about it when I smile and laugh.

“You’re a big part of my happiness. You do know that, right?”

“I know.” I kiss him again. “And I feel the same way. You’re awesome like that.”

“Keep throwing around adjectives like awesome and I’m gonna get a big head.”

“Which head are we talking about?” I ask with an unsubtle glance at his crotch.

“I was talking about the one on my neck.”

“Past tense. I can work with that. Let’s hurry up and get these carrots harvested so we can go inside, where I can admire your other head.”

“If I didn’t know better I’d say you only want me for my body.”

“Since you do know better there’s nothing wrong with heartfelt appreciation.”

Nate raises his eyebrows. “Sure, pretend your heart is in charge at the moment.”

“You say that as though it’s a bad thing, but you’re picking carrots faster.”

Some kids have imaginary friends. Jessie grew up in rural Maine where she needed to entertain herself, so she created an imaginary village and she has been dreaming up stories ever since. These days she writes romances which reflect her love of hot guys and a good happy ending.
Married to her own Mr. Right, Jessie gratefully acknowledges his support and encouragement. She enjoys exploring the diversity of the universe and therefore cannot commit to a single subgenre of male/male romance. She’s also a chocoholic, avid reader, and travel enthusiast. Too often she rushes out at the last minute because she lost track of time while writing. 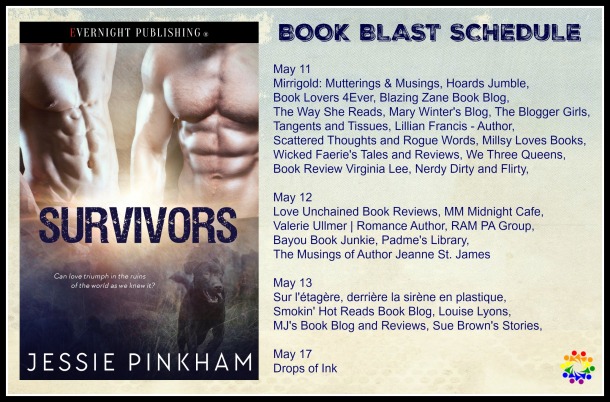