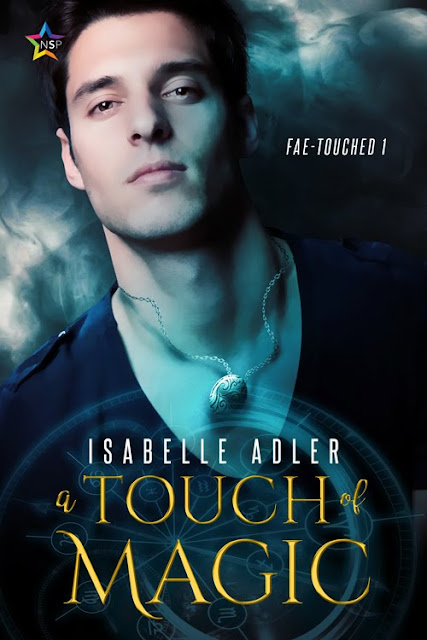 After returning to the straight and narrow, Cary Westfield hopes to rebuild his life as a stage magician. Only thing is, the success of his new show is entirely dependent on a strange medallion inherited from his late grandfather—an amulet that holds a rare and inexplicable power to captivate the wearer’s audience.

Ty prides himself on his ability to obtain any item of magical significance—for the right price. When a mysterious client hires him to steal a magical amulet from a neophyte illusionist, he’s sure it will be a quick and easy job, earning him a nice chunk of cash.

As it turns out, nothing is sure when greed and powerful magic are at play. When a mob boss with far-reaching aspirations beats Ty to the snatch, Cary and Ty form an unlikely partnership to get the amulet back. The unexpected spark of attraction between them is a welcome perk, but each man has his own plan for the prize.

All bets are off, however, when it is revealed the magical amulet holds a darker secret than either of them had bargained for.

A Touch of Magic
Isabelle Adler © 2018
All Rights Reserved

Chapter One
Cary Westfield wasn’t a terribly catchy name for a magician, so the playbill read The Incredible Mr. Mars.

Ty studied the vintage style poster near the theater’s entrance, which depicted said Mr. Mars pulling a bewildered-looking white rabbit out of a hat. Despite the old-fashioned font and style, the poster was brand new. Mr. Mars was a relative newcomer to the live entertainment scene and had only been performing at the Garland Magic Theater for two weeks, but the shows had been consistently sold out. Granted, this wasn’t the largest or the most prestigious venue in San Francisco; however, considering the act in question wasn’t at all original or shocking, consisting of run-of-the-mill stage illusions and a bit of mind reading, it was quite a feat.

The mass appeal would have been something of a mystery had Ty not known exactly what was behind it. That was too bad for poor Cary Westfield—sudden and unwarranted success tended to draw the wrong kind of attention.

Ty followed the line inside. The usher took a look at his ticket and directed him to the back row. Ty took the aisle seat and waited as the lights dimmed. The darkness sharpened the smell of dust coming from the old upholstery, the whispers of the spectators, and most annoyingly, the glare of their cell phone screens. It would seem even the promise of magic couldn’t tear some people away from their social media. The emcee announced the magician, and the show began.

Contrary to tradition, Mr. Mars didn’t have an assistant. His tricks weren’t all that complicated, but Ty had to give him credit for showmanship. He supplied a running commentary for the performance, which was both witty and charming and elicited laughter from the crowd. Smart. People always loved it when a show made them laugh, so they were more likely to forgive the lack of surprise and excitement. Not that Ty was in any way an expert on magic shows, but he was, in a manner of speaking, an expert on excitement.

The magician’s looks didn’t hurt either. His smooth tan skin and fine features made the gaudy stage costume appear elegant. Ty absently noted the lean figure and the fluid movements, but he wasn’t there to admire Westfield’s form.

As Mr. Mars struck another impressive pose, pretending to strain to recite the contents of some woman’s purse, Ty slipped quietly into the shadows, making himself as inconspicuous as possible. Thankfully, the small theater had an appropriately small staff, even on a busier Saturday night, and no one spotted him as he made his way to the backstage passage. There was only one dressing room, and the lock on it was a joke. He let himself inside and closed the door softly. The runes tattooed into his fingertips with invisible ink prevented him from leaving fingerprints, so he could rummage freely without being encumbered by gloves. That shit always came in handy—bad pun intended.

The small room was cramped, serving both as a makeup nook and a storage space for various costumes and stage props. There was a vanity with a large backlit mirror. Ty looked it over, but saw nothing of interest besides a kohl eyeliner and a few mini-sized bottles of flavored vodka scattered all over the tabletop. Either the Incredible Mr. Mars needed some liquid courage before facing the crowd, or Mr. Westfield had a bit of a drinking problem.

It was more force of habit than curiosity. Ty didn’t really expect to find anything of value lying around. He retreated to a far corner, where he spotted an oversized armchair under a pile of old sequined jackets, and settled there, taking out his SIG. The show was supposed to run for at least forty more minutes, but that was okay. He could wait.

A voracious reader from the age of five, Isabelle Adler has always dreamed of one day putting her own stories into writing. She loves traveling, art, and science, and finds inspiration in all of these. Her favorite genres include sci-fi, fantasy, and historical adventure. She also firmly believes in the unlimited powers of imagination and caffeine.