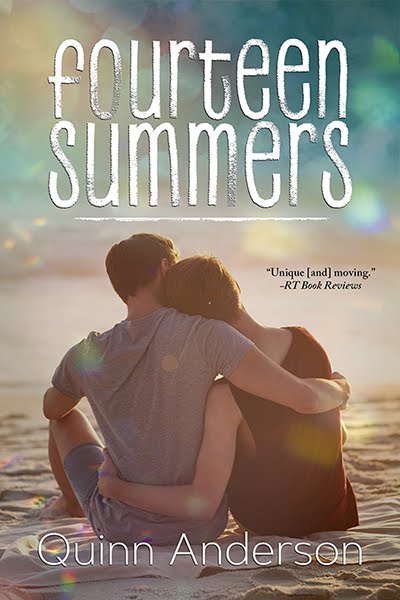 I’m Quinn Anderson, author of New Heights and the Murmur Inc. series. Welcome to my blog tour for Fourteen Summers! Stay tuned to get fun facts about this release, inside information about my writing process, and to learn how I chose my penname. Leave comments for a chance to win a $10 Riptide gift card. I look forward to chatting with you all!

Identical twins Aiden and Max Kingsman have been a matched set their whole lives. When they were children, Aiden was happy to follow his extroverted brother’s lead, but now that they’re in college, being “my brother, Aiden” is starting to get old. He’s itching to discover who he is outside of his “twin” identity.

Oliver’s goals for the summer are simple: survive his invasive family, keep his divorced parents from killing each other, and stay in shape for rowing season. He’s thrilled when he runs into his old friends, the Kingsman twins, especially Aiden, the object of a childhood crush. Aiden is all grown-up, but some things have stayed the same: his messy curls, his stability, and how breathless he makes Oliver. Oliver’s crush comes back full force, and the feeling is mutual. Summer just got a whole lot hotter.

Fun-loving Max takes one thing seriously: his role as “big brother.” When Aiden drifts away, Max can’t understand how his own twin could choose a boy over him. Summer won’t last forever, and with friendship, family, and happily ever after on the line, they’ll have to navigate their changing relationships before it’s too late.

To celebrate the release of Fourteen Summers, Quinn is giving away a $10 Riptide credit! Leave a comment with your contact info to enter the contest. Entries close at midnight, Eastern time, on May 26, 2018. Contest is NOT restricted to U.S. entries. Thanks for following along, and don’t forget to leave your contact info!