The steamy Chicago Rebels series returns with this racy and sassy tale of embittered hearts, second chances, and going for the goal—on and off the ice.

Violet Vasquez never met her biological father, so learning he left his beloved hockey franchise—the Chicago Rebels—to her is, well, unexpected. Flat broke and close to homeless, Violet is determined to make the most of this sudden opportunity. Except dear old dad set conditions that require she takes part in actually running the team with the half-sisters she barely knows. Working with these two strangers and overseeing a band of hockey-playing lugs is not on her agenda…until she lays eyes on the Rebels captain and knows she has to have him.

Bren St. James has been labeled a lot of things: the Puck Prince, Lord of the Ice, Hell’s Highlander…but it’s the latest tag that’s making headlines: washed-up alcoholic has-been. This season, getting his life back on track and winning the Cup are his only goals. With no time for relationships—except the fractured ones he needs to rebuild with his beautiful daughters—he’s finding it increasingly hard to ignore sexy, all-up-in-his-beard Violet Vasquez. And when he finds himself in need of a nanny just as the playoffs are starting, he’s faced with a temptation he could so easily get hooked on.

For two lost souls, there’s more on the line than just making the best of a bad situation… there might also be a shot at the biggest prize of all: love. 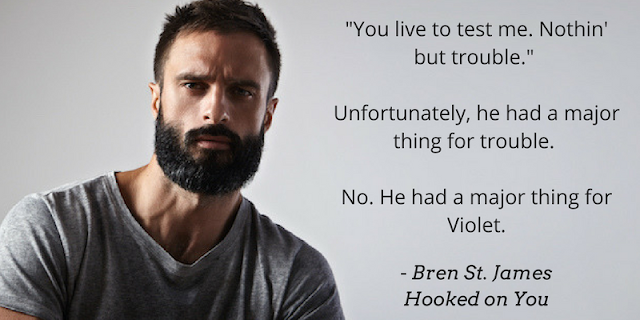 She smiled at him, a dazzler that knocked him over. “I’d best be off. Harper’s freaking out, which means my night playing nurse is only beginning. But first, I have a question for you, Franks.”
His daughter sat up straighter. “Okay.”
“What did the baby corn say to the mama corn?”
“I don’t know.”
“Where’s popcorn?”
Pretty lame, but Bren would suffer through a million terrible jokes just to witness the smile Violet put on his daughter’s face.
Franky grabbed her hand. “I could show you those other slugs tomorrow. They’re not as fascinating as the Rathouisiidae, but they’re still interesting. I have them in a terrarium at home.”
Kendra had never been encouraging of Franky’s interest in wildlife and science, preferring to direct her energies to dolls and clothes, pursuits that Franky didn’t care for. Though his daughters never said it, he suspected Kendra’s ambivalence to motherhood shone through, and this is why they’d wanted to live with him. His kids needed accepting adults in their lives, and he waited with bated breath for Violet’s response.
Violet squeezed Franky’s hand back. “Wow, you sure know how to sell it, kiddo. Let me see. I’ve got improv class in the afternoon, but maybe we can figure something out.” She was clearly trying to take the middle ground here—not hurt his kid’s feelings and still keep with Bren’s ill-conceived wishes that she not spend time with them.
He was such a jerk. He’d made this big to-do out of Violet and his kids because he wasn’t strong enough to be around this beautiful steak of temptation.
“See ya, Franky,” Violet said, pulling her hand away gently. “And remember: always ask before you chow.” She nodded at Bren as she headed out.
Bren leaned in and kissed Franky on the cheek. “I’ll be back in a sec, sprite.”
He caught up with Violet a few feet away outside the room. “Vi.” Vi?
She turned, obviously surprised. “Oh. Hi.”
“Thanks for doing that. For having the presence of mind.”
“No problem. I mean, it was pretty fucking scary, but I knew Harper had one with her and luckily she’d left her Kate Spade in the box when she stepped out.”
“Kate Spade?”
“Purse, heathen.”
He rubbed his beard to hide his budding smile.
“Don’t be too hard on Caitriona,” she said softly.
“Why do you say that?”
“I know she’s older, so I’m guessing you expect her to look out for Franky. But she’s just a kid herself, and she’s kind of self-absorbed right now for self-preservation reasons. I remember what that was like when—well, I remember. These last couple of weeks have been trying on you all.”
Worst father ever right here. He couldn’t think of a single thing to say. For years, he’d not needed to because he was: (a) married and (b) reliant on alcohol to make him more palatable to those closest to him.
Violet didn’t seem to care. She could have stepped into the silence, but she just stood there, waiting for him to get his personality together.
“Franky really likes you,” he said.
“Well, she has excellent taste.” Wink and grin. “She’s pretty special herself. She’s going to either rule the world or destroy it. Maybe both.”
“Yeah, sometimes I think she’s hovering on the edge of the dark side.” Talking about his kids was easy. For the last eleven years, his marriage had survived on conversations about the girls, which was perfect for the man who lived inside his head and made rare visits to the world of normal adults. He’d made a terrible husband, and not just because he was a drunk. Now, if he ever got around to dating, what the hell would he talk about?
Violet was surprisingly easy to talk to when he wasn’t trying to ram his tongue down her throat. He wished he’d tried this sooner instead of scowling at her for the last eight and a half months.
“When’s the hot Swede starting?”
“I haven’t called her yet.”
“Oh?”
He shook his head, unable to verbalize it. Ms. Ikea would have done a fine job saving Franky tonight—of that Bren had no doubt. But she wasn’t the one on the spot. This woman was.
“Could you come over tomorrow like Franky asked, for the slug show? After your improv class, if that’s a real thing?”
“Oh, it’s a real thing. I’m also learning flamenco. Building my résumé.”
He had no idea whether to believe her. But he wanted to believe in something.
“Her mom wasn’t the most encouraging of her interests.” He refused to feel bad about guilting Violet into a visit, not if it pleased his daughter. “If you have time, Franky would appreciate you stopping by.”
“Only Franky?”
“Not sure Caitriona appreciates anything right now.”
She smirked, a smartass look of I’ve got your number. She’d meant: Would one Bren St. James appreciate a visit from one Violet Vasquez?
“I’ll see what I can do, Nessie.”
She sashayed off down the corridor back to the waiting room, leaving him bewildered and questioning everything he thought he knew about women.

DON'T MISS THE OTHER BOOKS IN THE CHICAGO REBELS SERIES!

Originally from Ireland, USA Today bestselling author Kate Meader cut her romance reader teeth on Maeve Binchy and Jilly Cooper novels, with some Harlequins thrown in for variety. Give her tales about brooding mill owners, oversexed equestrians, and men who can rock an apron or a fire hose, and she’s there. Now based in Chicago, she writes sexy contemporary romance with alpha heroes and strong heroines who can match their men quip for quip.