Wash Out by L.A. Witt - Blog Tour with Exclusive Excerpt and Giveaway 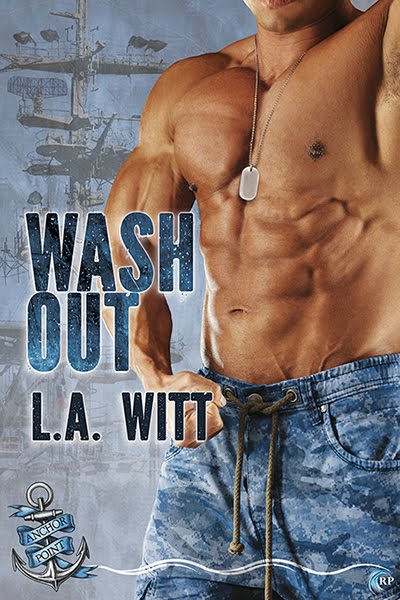 Casey Olson has always known he was destined to be a Navy SEAL, and the best day of his life was when he was accepted into training. The worst day was when a snapping bone ended his dream.

After three combat tours in five years, Logan Carter left the Marines and self-destructed. Now he’s sober and, thanks to a forgiving ex with friends in high places, has a promising job as a civilian contractor. All he has to do is stay on the rails and out of a bottle, even when his demons won’t leave him alone.

Logan likes his job, and he really likes the gorgeous man at the next desk. Casey tries not to check Logan out, but who is he kidding? From the start, despite their best efforts, neither man can resist the other. Sizzling chemistry leads to sex so hot they can both almost forget why they’re stuck in this office to begin with.

It would be perfect, except Logan can’t stop reliving wars he’ll never forget and Casey can’t stop grieving the SEAL he’ll never be. And they’ll never have a future together until they can make peace with their pasts.

Exclusive Excerpt
I’d barely sat down when my phone buzzed. From the subtle throat clearing behind me, I knew before I looked at the screen who the text had come from. Just to be on the safe side, I glanced around to make sure Diego or Sarah weren’t watching me, and then checked the message.
Think our lunch break is long enough for a quickie?
My breath caught. I looked over my shoulder, and Logan was eyeing me. He had his back to Sarah and was leaning over a desk drawer, but he was definitely watching me. The way the corner of his mouth rose made my heart race almost as much as his text message had.
A lunch break quickie? Tempting. Even more tempting, though, was fucking with him first, so I wrote, Might be fun to tease you until tonight.
I sent the message, trying hard not to smirk. When his phone buzzed and he read the screen, I very nearly had to put a hand over my mouth to contain my laughter.
He shot me an offended look, and huffed.
The laugh escaped. I smothered some of it with a cough, but couldn’t wipe the smirk off my lips. Logan’s indignant typing on his phone didn’t help at all.
He put the phone down hard. Then mine buzzed.
That’s just mean.
I snickered.
The sound of a throat being cleared made me pause, and I turned to see Sarah watching me, one eyebrow up. Behind me, Logan made a sound that might’ve been a cough, or might’ve been some badly covered amusement. Sarah’s eyes flicked toward him, and that eyebrow rose even higher. I thought she might comment, but then she shook her head and put up her hands in an I don’t want to know gesture before she went back to whatever she was working on.
Out from under her scrutiny, I reached for my phone and wrote back, Maybe I am. Or maybe I just want to spend more than a lunch break on you.
I knew the instant he got the message from the pained groan that came from his cubicle.
“My text stands,” he grumbled.
I glanced back at him. He tried to look annoyed, but the sparkle in his eyes gave him away. I winked. He laughed.
Then I typed out, You’re right. I’m a tease. Gonna tease you ALL day.
As soon as that one was sent, I added, Your mouth would be awesome on this hard-on.
I pressed my lips together to contain myself as I hit Send.
Behind me, Logan’s phone buzzed quietly.

A second later, a pen bounced off the cabinet beside my head, and I couldn’t help laughing out loud.
Sarah stood, clicked her tongue, shook her head, and as she walked past to the copy machine, muttered, “Little boys . . .”
About Anchor Point 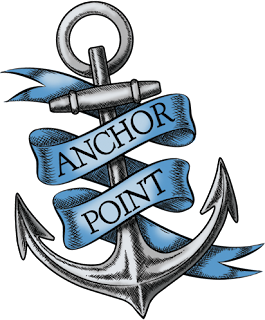 To celebrate the release of Wash Out, L.A. is giving away reader’s choice of two eBooks off of her backlist! (Excludes Wash Out.) Leave a comment with your contact info to enter the contest. Entries close at midnight, Eastern time, on May 26, 2018. Contest is NOT restricted to U.S. entries. Thanks for following along, and don’t forget to leave your contact info!