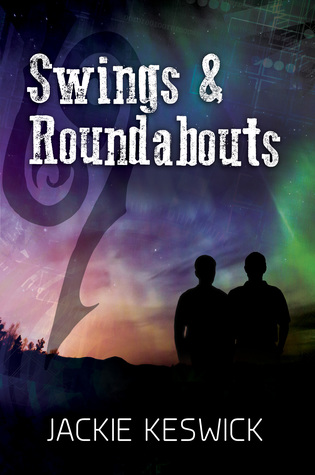 The Power Of Zero Series

Desperate for a relationship reset, Jack treats Gareth to a romantic getaway and Sweden’s frigid peace gives them the break they both need. But Jack’s a trouble magnet and the next dead body just a wild skidoo ride away.

Can love, teamwork, and trust survive the troubles that follow them around? Can Jack save what’s become so important to him?

Expect action, drama, and hot romance in book 4 of the Power of Zero series.

Swings & Roundabouts is the 4th book in The Power of Zero series. This is a series that must be read in order as it follows the same couple, Jack and Gareth, through their relationship and life around them.

I am completely and utterly in love with this series, so I was completely excited that this new book was coming out. First as I stated above this is not a standalone book, so you can't just dive into it. This is a true series where the books need to be read in order or you'll lose a lot of the storyline and continuity.

This story finds Jack and Gareth at a bit of cross purposes, moreso that they aren't taking enough time for them and putting everything, and everyone, else first. Both have gotten a tad bit snappish at each other, and that's when Jack finally decides enough is enough and he plans a get-a-way for them to a surprise location. Unfortunately things don't go totally as planned and on their final day on holiday, they stumble across a dead body.

As I started off with, I absolutely love this series and these two characters. Jack and Gareth aren't your typical romantic heroes, honestly both are anti-heroes to some extent. However they're extraordinarily redeemable characters with lots of depth and continued growth through each successive book. Their protective instincts for those they love and consider theirs makes them more than you'd expect to find in two ex-military men who don't tend to show emotions to the greater world. That is until they both realize how much they need each other and their adopted boys, Nico and Daniel.

I truly enjoy the interaction between Gareth and Jack, and then both men with Nico and Daniel. In some ways the boys are less world-weary copies of Gareth and Jack. However that doesn't make them less wounded and damaged from what their lives have been like, and Jack and Gareth are the best to get them through all of their healing. This series is very well written, has storylines that suck you into them, and tend to pack a strong emotional punch.

I highly recommend this series if you've never picked one up, and if you have this next book is a must read to see what Jack and Gareth get up to, next. I can't wait for the next book in this series or from this author.

Jackie loves unexpected reunions and second chances, and men who don't follow the rules when those rules are stupid. She blogs about English history and food, has a thing for green eyes, and is a great believer in making up soundtracks for everything, including her characters and the cat.

For questions and comments, not restricted to green eyes, bus stops, or recipes for traditional English food, you can find Jackie Keswick in all the usual places: