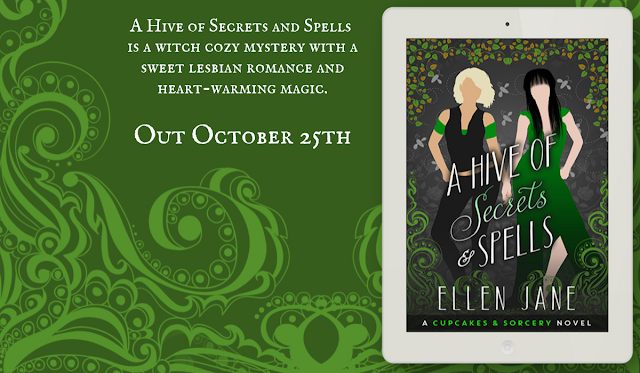 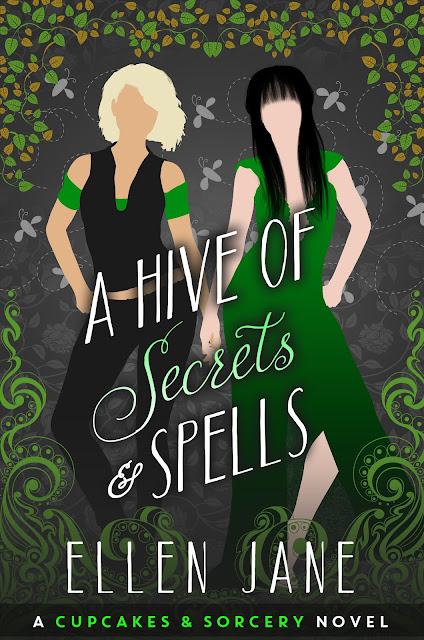 A Hive of Secrets and Spells by Ellen Jane

Synopsis for A Hive of Secrets and Spells:

Cupcakes, romance, and lovable canines abound in Heather and Sinead’s next adventure, but it isn’t all fun and games. The girlfriends are investigating a very personal kidnapping, and the threatening notes left behind accuse Sinéad and her punk-rocker twin brother of hiding something.

But after solving their first mystery together last Christmas, this one should be a piece of cake.After all, no one’s been murdered this time, and their witch-sorcerer rivalry is a thing of the past.Except it turns out there is a murderer, and a jewel thief as well, and why on earth does everyone keep talking about bees?

It appears Starford is a lot more exciting than Heather’s home town of Old Wetchhaven, and Sinéad’s insistence that Heather move in with her brings a whiff of trouble to their private paradise. Can Heather adjust to life near the big city? Or will the mounting secrets prove too much and turn their second case into their last?

A Hive of Secrets and Spells is a witch cozy mystery with a sweet lesbian romance and heart-warming magic.

Ever since she discovered cooking, Heather had baked her emotions away. Salves, elixirs, and potions were more natural to her when it came to magic, but she loved to bake and she had worked on strengthening her baking magic for years—during the last year, particularly—until it was almost as strong as her potions.
The magical community still debated why particular magical talents called to some and not others. Could a witch or sorcerer choose which talent their magic showed itself through? Or were they drawn to a talent because it held their magic? Either way, whether Heather had chosen cooking or it had chosen her, it had always been the thing she turned to when stress and emotion overwhelmed her.
For a moment, she considered trying to use the block of beech again, but the thought of spending all night trying futilely to recover her parents’ voices made her stomach twist. She didn’t want to think about any of that—not the lost voicemail she was trying so hard to ignore, not the fact she couldn’t make her magic work the beech the way it needed to, not the case. Heather needed a break from all of it.
She cleared the bench and began to set out ingredients, not paying particular attention to what she selected, just picking based on what felt good. The night air, surprisingly warm for November, filtered through the open sliver of window. She moved barefoot across the tiles, mixing flour and cocoa and this and that until a biscuit dough began to emerge.
Humming to herself, she lined the biscuits onto a tray and slid them into the oven. The precise spell she had baked into them remained a mystery, but whatever it turned out to be, it had already suffused the kitchen with a gentle, inviting thrum of energy.
She turned around and nearly jumped a foot in the air when she saw Sinéad leaning in the doorway, lips curved into a gentle smile.
“Can’t sleep?” Sinéad asked.
Heather grinned and shook her head.
“Funny that.” Sinéad pushed away from the doorframe and came to sit at the breakfast counter. “Neither can I.”
Heather noticed then that Sinéad’s hands were covered in small spots of paint. That explained why she hadn’t disturbed Sinéad getting out of the bed; Sinéad hadn’t even been in it.
“Does painting help?” Heather asked.
Sinéad nodded. “It always has.”
“Come up with any answers, then?”
“Absolutely none.” Sinéad gave her a wry smile. “Find anything useful hiding in the sugar tin?”
“Rudely empty of everything but sugar.”
“Rats.”
They smiled at each other, eyes soft in the dim light of the lamp. Heather held up the bag of icing sugar.
“Want to help decorate?” 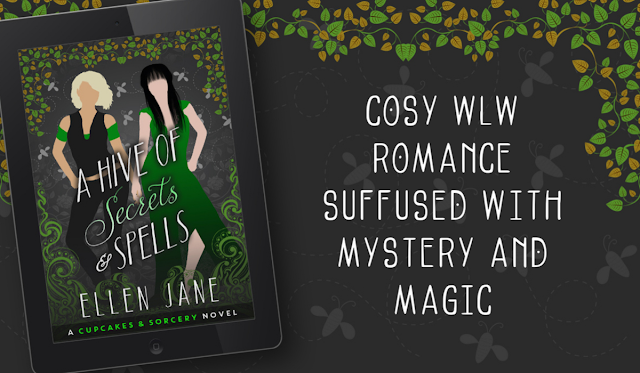 Ellen Jane Phillips is an Australian indie author of wlw romance. She loves writing about LGBTQ women who experience complex lives, emotions, needs, and desires. Her books are written for people who crave love stories where friendship is just as important as romance, and who want to experience cosy warmth with a hint of mystery, magic, and emotion.
You can find her writing under two pen names: Ellen Jane, and E.J. Phillips. If you like light, cosy wlw romance suffused with magic and mystery, Ellen Jane is the pen name for you. If you prefer something a little heavier, and you like your wlw romance tinged with magic and tender angst, E.J. Phillips is the one you want. When she isn't writing, you can find her walking the dogs, playing D&D, or bemoaning the number of days since she last ate nachos.

Giveaway:
Win one of 2 packages with e-copies of Magic, Murder & Mistletoe, A Hive of Secrets and Spells & A Match Made at Christmas by Ellen Jane.