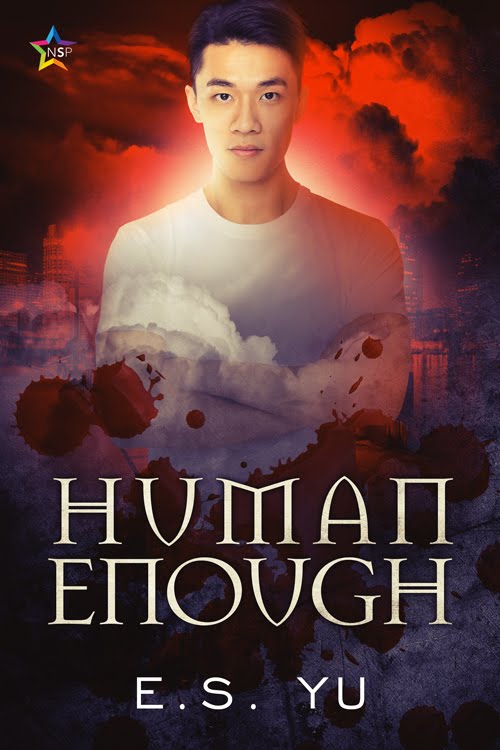 When Noah Lau joined the Vampire Hunters Association, seeking justice for his parents’ deaths, he didn’t anticipate ending up imprisoned in the house of the vampire he was supposed to kill—and he definitely didn’t anticipate falling for that vampire’s lover.

Six months later, Noah’s life has gotten significantly more complicated. On top of being autistic in a world that doesn’t try to understand him, he still hunts vampires for a living…while dating a vampire himself. Awkward.

When one of Jordan’s vampire friends goes missing and Noah’s new boss at the VHA becomes suspicious about some of his recent cases, what starts off as a routine paperwork check soon leads Noah to a sinister conspiracy. As he investigates, he and Jordan get sucked into a deadly web of intrigue that will test the limits of their relationship.

Chapter One
As a vampire hunter, Noah was used to his plans going south in the worst possible ways. This op, however, was currently vying for one of the worst—by annoying him out of his goddamned mind.

On paper, it had sounded simple: a vampire had been responsible for some blood-drained corpses, probably a newly turned one based on how messy the crime scenes were, and Noah’s squad had been assigned to take care of the problem. They were in the unusual situation of being down one member while waiting for their new squad leader to arrive, but the op should’ve been easily doable for a three-person team. According to their intel, the vampire always left his suburban house after sunset to feed. Except Noah was still sitting in a backyard tree five hours after sunset, watching the vampire’s immobile heat signature through the second-floor window. His fingers were going numb in the cold autumn night, the colors from his infrared binoculars had practically been seared into his retinas, and he swore he was going to become part of the tree if he sat there for much longer.

He finally got Casey O’Donnell to cover for him—which Casey only agreed to after making some snide comments—while he texted Jordan.

Sorry, can’t make it to the movie tonight. Hunt taking longer than expected.

And, after debating with himself as to whether a smiley face was too much, he finally added, L.

Jordan texted back quickly: No worries. Be safe!!

It was the third time he had to cancel plans with Jordan in two weeks, and it was making him cranky.

“Who were you texting?” Casey asked, again, from his perch on the opposite side of the tree.

“Someone,” said Noah for the third time.

Casey was eyeing him in a way that made Noah uncomfortable. “That’s the third time you’ve texted during a stakeout.”

Jesus, he’s keeping track? Noah put his phone away. “What, like you’ve never played Candy Crush on your phone during a stakeout?”

Casey raised an eyebrow. “I thought not breaking rules was your thing. Along with not being able to lie and stuff.”

And there it is. Noah suppressed the urge to snort. Casey was half right…but he was also half wrong, as usual. While Noah generally preferred not to stir up trouble, he was perfectly capable of breaking rules and lying through his teeth if he thought it was for the “greater good,” however he defined that. Which, in this case, meant passing on status updates so Jordan wouldn’t be up all night worrying.

Noah raised the infrared binoculars to his eyes, turning the night back into neon colors, and scanned the second-floor bedroom again. Still no movement. He turned his comm back on. “Guys, the vamp might as well be asleep. We should move.”

“No can do, Lau,” said Ava Lopez through the comm. She was currently keeping watch at the front of the house. “He might use the human as a hostage if he smells us.”

That was the problem, the reason why they’d been stuck out there for hours, waiting for the vampire to leave. Through his infrared binoculars, Noah could clearly see the human’s heat signature in the same room as the vampire’s dimmer one. There were any number of reasons why a human might be living with a vampire, but standard hunter protocol was to assume that a vampire valued human lives less than their own.

But what if that might not be true? an annoying voice asked in the back of Noah’s mind.

His jaw tightened. He couldn’t say that for sure, and human safety always had to come first, he reminded himself. Besides, the vampire had already crossed the line by killing people.

“Well, intel has clearly been faulty so far, so how much longer are we going to wait out here?” he groused. He hated faulty intel. At best, it scrambled their carefully created plans and forced them to improvise; at worst, it cost lives. Also, right now it was ruining the romantic movie night he’d planned.

There was silence at the other end as Ava thought. At least, Noah hoped she was thinking of a plan and not a rebuttal as to why they should sit and wait for another five hours.

“Okay,” she finally said. “I’m thinking doorbell strategy. Anyone have any objections?”

The doorbell strategy was slightly risky for a three-person team. If they flushed the vampire out, they’d usually need someone to cover every side of the house. Noah couldn’t think of any other feasible, safe alternative, though.

Noah continued watching the window through the infrared binoculars. After a few minutes, the human heat signature left his view.

“The human’s answering the door,” Noah said over the comm.

“Copy that,” said Casey. His boots scraped against bark as he climbed down from the tree. “What’s the status on the vamp?”

The muted sounds of Ava’s conversation with the house’s human inhabitant sounded over the comm. Then, Ava said, “I’m going inside to flush him out. Be prepared.”

Noah put his binoculars away and clambered down from the tree. “I’m at the south window,” he said. Although the bedroom was on the second floor, vampires could survive jumping to the ground from that height with no problem.

Noah readied his rifle. One minute passed. Then, another. Ava shouted at the vampire, her voice carrying through the comm a split second before gunshots followed.

Noah heard the sound of a window shattering—at the unguarded front of the house.

“He’s escaping through the front!” he yelled. He ditched his rifle and drew his handgun from its holster as he bolted around the side of the house, toward the sound of breaking glass.

He raised his gun and shot as the vampire fell, but the vampire hit the ground, rolled to his feet, and immediately grabbed the human woman who’d been standing in the front yard, yanking her against him. She hadn’t moved away from the house the way Ava had instructed her to. Noah’s heart sank.

This was not the “easy, quick hunt and then go home” he’d been hoping for.

Casey came around the other side of the house behind the vampire. “Don’t shoot,” Noah said into the comm. “There’s a hostage in front of him.”

“Make one move, and the human goes!” the vampire shouted, keeping the woman in front of him as he turned to face Noah. The woman’s eyes were wide with fear.

Noah hesitated, his finger perched on the trigger. His marksmanship was solid, but he still didn’t want to risk shooting the woman. Ava was still in the house, judging by the way the vampire glanced through the open doorway, but her options were also limited.

“You don’t have to do this,” Noah said, and then nearly cringed when he realized he was reciting a line from basically every action movie ever.

The vampire bared his fangs next to the woman’s neck. “I wouldn’t have to if you hunters just left me alone!”

Noah’s grip tightened on his gun. “You know what the punishment is for killing humans. You brought this on yourself.”

He suddenly cried out, crumpling to his knees. The woman scrambled away from him, and Noah took the shot, nailing him in the chest. He crept closer, making sure to shoot the vampire in the heart several more times. The vampire didn’t move after that.

“Death confirmed,” Noah said into the comm. He glanced through the doorway into the house, to where Ava had knelt in the front hall to shoot the vampire in the knees. “Thanks.”

Ava nodded at him as she got up. “No problem.”

Casey came over to join them and whistled. “Shooting out his kneecaps? Impressive.”

“And nice job for finishing him off and keeping him distracted, Lau,” said Casey. “But you know there’s no point in reasoning with vampires, right?”

Noah didn’t reply to that except to shrug. He went to grab the body bag from their van.

He and Casey stuffed the corpse into the bag—while Casey moaned and groaned about being on cleanup duty, as always—while Ava made sure the woman was okay. She reported back to them that the woman was in shock, so after Noah and Casey lugged the bag and the rest of their gear back to the van, they dropped the woman off at a hospital. Noah hoped she would be okay.

“Whew,” said Ava, once they’d dumped off the body for disposal and driven back to headquarters. “I don’t know about you guys, but I could really use a drink. Anyone else up for a bar crawl?”

“Can’t,” Noah said immediately. “Sorry. It’s pretty late, and I have to get back home. Maybe next time, though,” he added, to be polite.

Before Noah could answer, Casey beat him to the punch. “It’s his mysterious girlfriend he won’t let anyone meet. What’s her name again?”

“Jordan. And for the last time, she’s shy and private and faints at the mention of blood,” said Noah, the practiced lies rolling smoothly off his tongue. “Can’t anyone keep their work life and private life separate anymore?”

Noah rolled his eyes. “I wouldn’t want to give you any ideas, O’Donnell.”

He said goodbye to his squad mates before they could ask him any more questions and drove back to his apartment. Damn, it was late. Wearily, he trudged up to his unit, unlocked his door, and slipped inside.

He made his way into the bathroom, stripped his clothes off, and stepped into the shower, sighing as the warm water hit his tired muscles. He closed his eyes, trying to let his mind drift away from work. A few minutes later, the shower curtain slid aside with a rustle and cool arms circled his waist.

“Long day at the office?” a soft, low voice murmured against his ear.

Noah smiled and leaned back. “Very long. Glad to be home at last.”

Noah turned around to look at the hazel-eyed man with golden-brown hair and pale skin—a touch too pale—behind him.

“Hey, Jordan,” he said, before leaning forward and kissing his boyfriend under the shower spray.

Noah always felt somewhat bad for lying about his “girlfriend” to his coworkers. It wasn’t that he was afraid of people knowing he was dating a guy; he just didn’t want anyone getting too interested in his dating life and finding out he was dating a vampire. 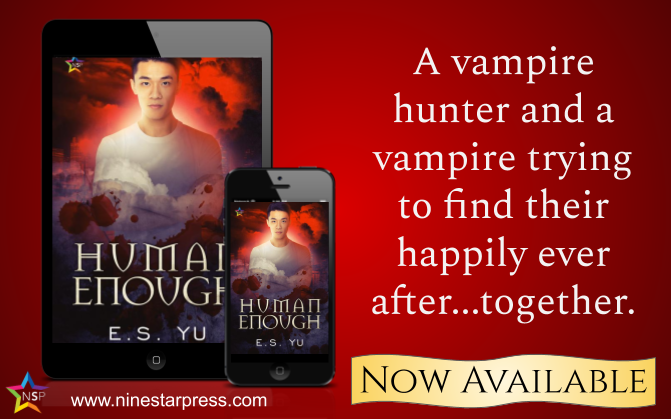 E.S. Yu is a writer of speculative fiction and a geek who lives for video games, superhero comics, and all things sci-fi/fantasy. E.S. is a recovering law school graduate who lives off green tea and dreams of writing full-time; for now, she follows wherever her muse takes her to places sometimes dark, sometimes quirky, but always hopeful.