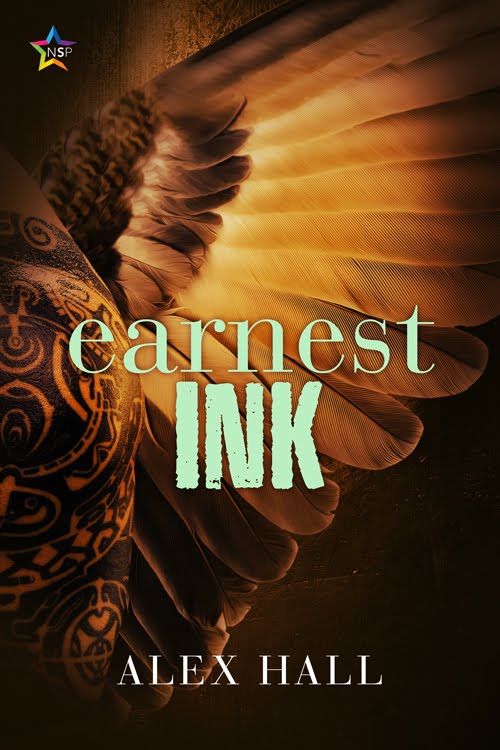 While twenty-year-old FTM Hemingway is making an excellent living as a tattoo artist in a near-future version of Hell’s Kitchen, the rest of the country is splintered and struggling in the wake of a war gone on for too long. Technology has collapsed, borders rise and fall overnight, and magic has awakened without rhyme, reason, or rule, turning average unwitting citizens into wielders of strange and specific strands of magic.

Hemingway’s particular brand of magic has made him a household name. Not only is he a talented artist, but his work comes to life. Literally.

When NYC’s most infamous serial killer—the East River Ripper—abducts Hemingway’s best friend, Grace, he has only days to save her. Hemingway teams up with his stoic cop roommate to hunt for the killer and rescue Grace before she becomes the Ripper’s latest victim. But as the duo chase clues to the serial killer’s identity, Hemingway begins to fear the magic he and the Ripper share might eventually corrupt him too.

I work without speaking because that’s the way I prefer it. The vibration of my machine, the softer buzz of the fluorescent lights overhead, the tap of my foot on the pedal—it’s the best music in the world.

When I hit a ticklish spot, the girl I’m working on gasps, jolting in my chair.

The girl is sweating down the crook of her neck. She’s got silver glitter paint on her eyelids and cheeks, a new fashion trend I just can’t quite get behind. Under my lights the mix of perspiration and makeup looks like a blurry constellation.

She wanted a bee inked onto her collarbone, one of those tiny honeybees you find on good tequila bottles. Easily done, and she met the cash requirement. She’s eager, nervous, and breathing in and out in little puffs.

I can’t remember her name, but that’s fine. Customer relations is Eric’s job.

There’s another kid leaning over my glass counter, watching eagerly as I work. “Does it hurt?” he asks. “When the magic happens?”

The bee’s fat yellow thorax wriggles from side to side as it begins to wake, fighting the pressure of my needle, hungry for life.

“It looks like it hurts,” the kid says. I ignore him.

One minute more and—thanks to my peculiar magic—this bee will fly free.

I’m perched on a swivel stool, a wet paper towel in my hand to wipe away ink. It’s too hot in my studio, even with the industrial fans whirling overhead and the door propped wide open. Evening light slants in through the door and the north-facing, floor-to-ceiling window panes that look out onto West Forty-Sixth. It’s muggy, too warm for New York in October, and all of Hell’s Kitchen is wilting, including my client.

“What does it feel like?” the kid demands. He’s leaving greasy fingerprints on the surface of the glass as he strains to get a better look at what I’m doing. I study him out the corner of my eye, wiping sweat off my nose with the back of my wrist before it drips on my customer. He looks like one of the street punks who have taken to running in packs near the cruise terminals, sleeping in old, abandoned cargo containers and panhandling up and down the marina.

He’s skinny and tall, hair dyed an unsettling violet and styled into spikes all over his head. He’s got a silver ring in his septum and more hoops in his ears; his eyelashes are coated with purple mascara to match his hair. Green glitter paint sparkles on his lids. His T-shirt and jeans are torn and dirty, and he’s got a pack of black-market cigarettes rolled into one sleeve against his upper arm.

“Tattoos hurt. The magic bit? Not so much. Now get off my counter; you’re leaving streaks.”

That’s from Eric, working customer relations from behind the shelter of our gigantic, old-school cash register. The register’s solid brass and built like a tank, and Eric keeps pepper spray and a butterfly knife in the drawer with the cash just in case. Eric hates people in general, and New Yorkers in particular.

Before the draft he was an intern at a law firm in Connecticut. He wasn’t on the front for more than six months before he contracted Cascades fever and was sent home on medical discharge to die. While lying in bed one day, he saw me on TV and decided he could make good money as my receptionist and bodyguard.

Eric didn’t die. He got better, found his way from Connecticut to New York, crossed the border on a military visa, and stayed. I hired him because he knows how to sell an idea, keep a tidy client book, and break an assailant’s neck with one arm.

“Sorry.” The kid jerks away from the countertop. I lean back over the girl in my chair. He clears his throat. “I mean, how would I know, right? I’ve never seen magic before. Except on TV. And you can’t believe everything you see on TV. Some of that shit just isn’t real.”

He’s got a barely noticeable accent, a strange softness to his vowels. I think he must be Canadian, and I’m surprised. Most of the Canucks still left in the city keep to themselves, living and working south of Wall Street in a homogenous neighborhood known affectionately as Little Montreal. From what I’ve heard, they’re a close-knit, fanatically private, mostly wealthy group of people, and it seems unlikely one of their kids would take it upon himself to break with tradition and trade real family for the rat pack running rampant on Pier 88.

The girl twitches and giggles when I wipe her collarbone. A lazy breeze sneaks in through the door, along with shouts and muffled laughter. It’s tourist season, and outside Earnest Ink, the sidewalks are busy with gawkers from out of town. Mostly they just take selfies under my sign. If they’re stupid enough to come in without plenty of cash in hand, Eric chases them out.

I’m guessing the street punk spent his last handful of dollars on the cigarettes rolled in his sleeve, so I’m not sure why Eric’s letting him linger.

“This particular ‘shit’ is real as it gets,” Eric drawls while I smooth petroleum jelly over skin. The ointment’s pleasantly cold. The girl shivers.

“Can I come closer? Just a little? I want to see.” Without waiting for permission, the kid bends over the counter, resting his elbows on the glass.

Eric shifts languidly behind his register but doesn’t chase him off. Bee Girl is our last appointment of the day. Eric’s bored and probably hungry, and maybe that’s why he lets the kid stay—for entertainment. But he doesn’t really want to have a conversation. Probably he just likes the look of the kid’s hair and eyes. Eric’s in his early twenties like me, but he acts ten years older. I think it comes from seeing the front line and living to tell about it. He dresses like a runway model in secondhand Chanel suits and 1990s-era Givenchy. He keeps up on the latest city fashions with an eagerness bordering on obsession, and reads literary classics with equal enthusiasm.

“Okay,” I answer without looking up from my work. “But maybe don’t talk so much. It’s distracting.” I smile apologetically at my client, but she only giggles more. Cheap wine has dyed her lips indigo. I test my machine, squeezing the trigger. It vibrates under the pressure of my fingers.

“You him?” the kid asks eagerly. “Hemingway? The thaumaturge?”

I nod. Hemingway’s my surname. It’s what I’ve gone by since I escaped Ketchum, Idaho, for the big city.

“Huh.” He sounds reluctantly impressed, but he doesn’t take the hint to shut up. “Did you really do Arctic Fox in their hotel room before their last show?”

Eric snorts. Bee Girl blushes pink under her paint. I check my ink cup to make sure I’m not running low before working the foot pedal again.

“Matching ink, all six of the band members.” It hadn’t been a very exciting job. They’d been specific and unimaginative about what they’d wanted and too stoned at the end to react much when the sailors’ swallows I’d inked onto their biceps spread their wings and took flight, swooping a few inches into the air, tethered by an invisible thread of magic to tattooed flesh. “Photos in the red book, there. Take a look.”

I hear him open the book and flip through. The tattoo machine sends vibrations through my bones and the girl’s, together.

“You’re not old enough,” Eric retorts. “Come back in a few years and then we’ll talk.”

“Law’s eighteen in Manhattan,” I say over the buzz of my machine. “I never break it.”

“It’s a stupid law… Are you sure you’re him? I expected someone…taller.” He’s so lanky he reminds me of a brilliantly plumed stork.

“License is right there in the window,” Eric replies, examining his fingernails. “And rules are rules, so take off and come back when you’ve grown pubes.”

The kid takes his advice and leaves, stomping his way out of the studio and into the stale afternoon, bony shoulders hunched. 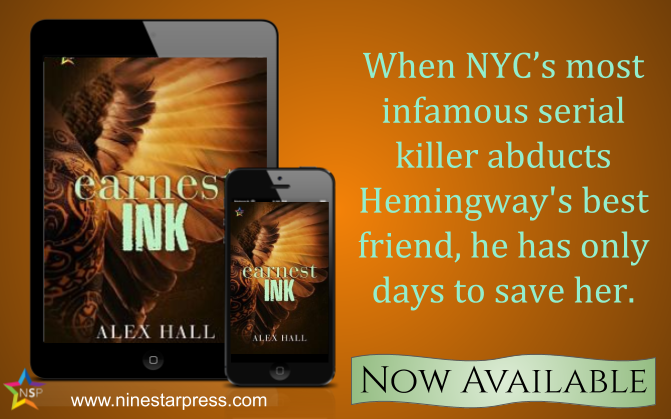 Sarah Remy/Alex Hall is a nonbinary, animal-loving, proud gamer Geek. Their work can be found in a variety of cool places, including HarperVoyager, EDGE and NineStar Press.