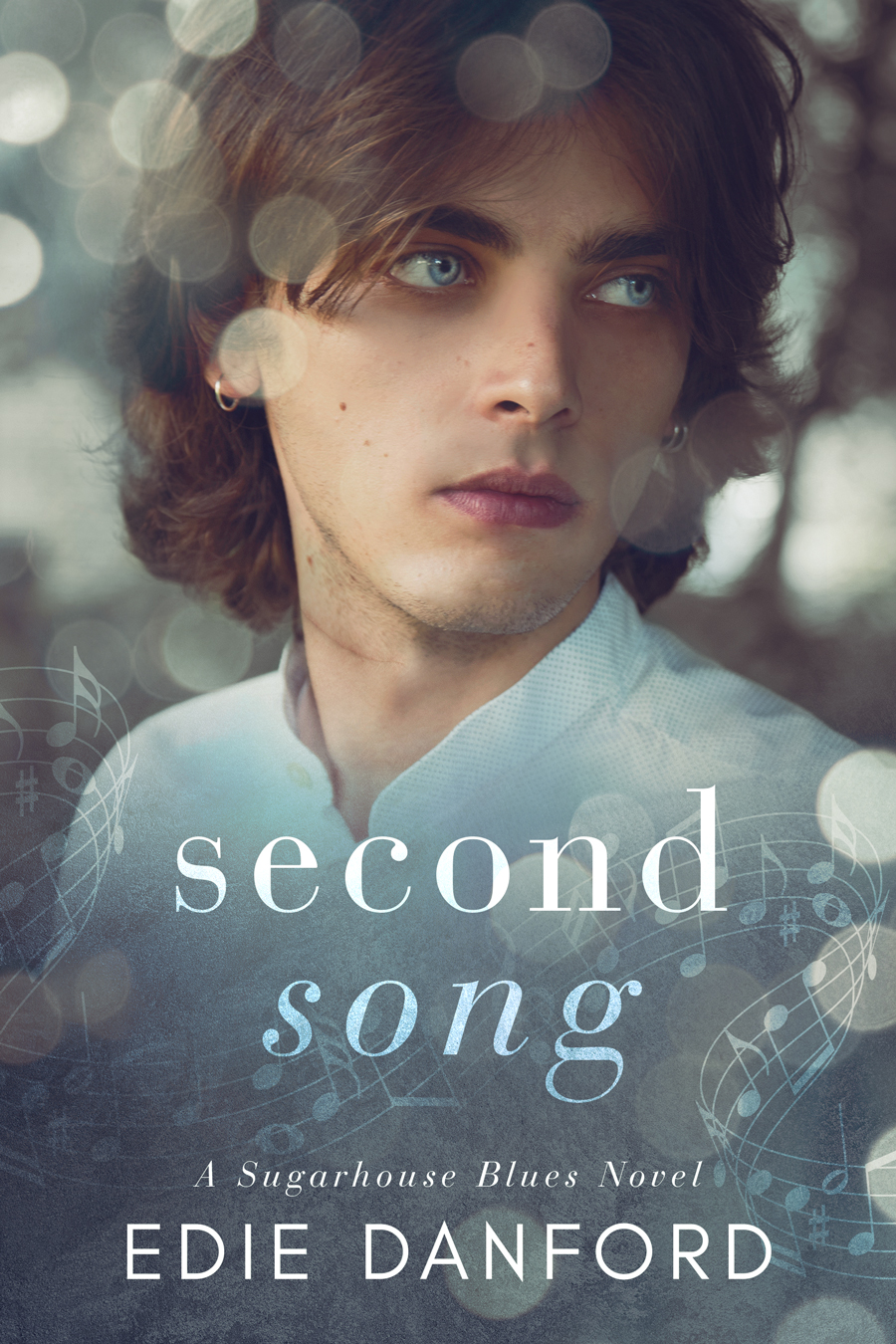 Four years ago, a brutal attack shot down my soaring music career. My bodyguard, a man I loved like a brother, was killed, and serious injuries left my voice permanently damaged.

Songs silenced, I retreated to my Vermont home, unsure I’d ever perform again.

Now I’m ready to go public with my new act. But, yeah, I’m a little nervous. So to handle security for a trial-run tour, I’m hiring a guy I trust absolutely—Antonio Callan, my former bodyguard’s brother.

But when Antonio shows up, all super-chill fierceness and warm, understanding eyes, I’m up against an unexpected risk—losing my heart.

Touring backwoods bars with a reclusive singer is the wrong gig at the wrong time. But how can I refuse the wounded kid my brother thought of as family?

After a week in Vermont, I’m feeling more helpless than heroic.

Sage has grown up, and I’m crazy-attracted to him. His broken-but-beautiful voice knocks me out, and his quiet courage sings to my soul. The more time we spend in close quarters, the harder it becomes to resist our attraction.

Soon, Sage’s second act is rocketing to the top of the charts, and being his hero takes on a whole new meaning. It’s up to me to take his cue and find the courage to reach for a star.

Second Song is the first in the two-book Sugarhouse Blues series and can be read as a stand-alone. Contains angsty-hot pining (and Vermont pines), first-time lovin’, sappy songs (and Vermont maples), and the healing power of loooooove. 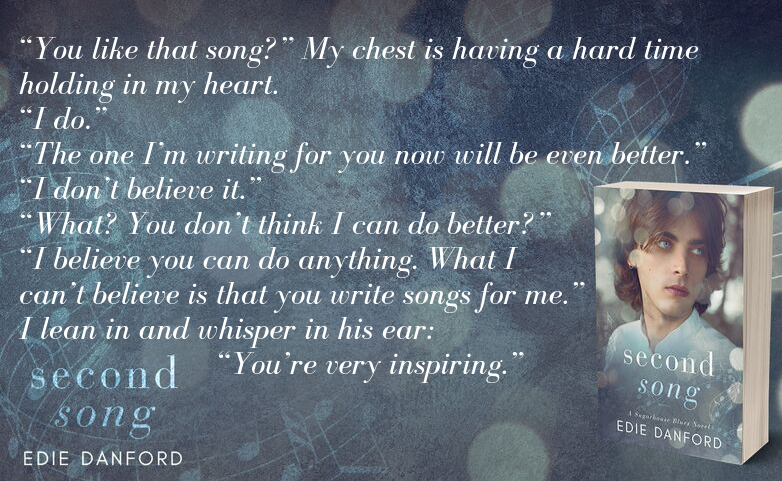 I work on my new song, take a shower, try to nap.
None of it relaxes me. There’s a good chance I might be overthinking what might or might not happen on tonight’s date. But I’m a twenty-three-year-old virgin who has never been out with a guy for real, so maybe I need to give myself a break?
I’m stewing over restaurant ratings and debating whether I should text Antonio and ask what he’d like for dinner—such a reasonable thing to do—when my phone pings with a text notification. It’s from Antonio. He’s here a little early. My dick perks and my mouth gets dry. My palms are sweaty and rubbing them on my jeans doesn’t help.
God, I’m a mess. Luckily, this won’t be a shocker to my visitor.
I lurch to the door and open it, vibrating as I hang on to the doorframe and look down the hall toward the bank of elevators.
There’s a soft chime and my dick pokes at my jeans, Pavlov’s drooling, panting dog. Two seconds later, he’s heading my direction. He doesn’t notice me because he’s looking at his phone.
He’s back to his Antonio uniform—dark jeans, boots, and what looks like a black sweater under his open jacket. And, oh shit. It’s a biker jacket. Black leather, of course, but battered to gray in spots and slim-fitting, clinging to his big arms and his slender torso.
I’m totally gonna steal it.
And then I’m gonna steal him. My hands clench with the need to rip it all off him, even as my brain screams, “Dude is waaaaaay too hot for you, Sage.”
“Shut up,” I mutter.
He glances up. When he sees me, he smiles.
He shoves his phone in his pocket and runs his hand over his hair. I like the new, stylish cut, but if I had my way, it would be longer, messier. If you’ve got hair that’s thick and silky and wavy and black as night, why not have more of it?
“Hey,” he says. “Hallway lurker. What are you doing?”
When he reaches me, he puts his hands on my waist and pushes me back slowly, the smile not only on his mouth, but in his eyes.
I inhale as I step back into the suite. Damp cotton and leather. City. Antonio. The blend overpowers all the flowery hotel scents, and I love it.
“Mm.”
“Mmmm.” His head dips, and he kisses me as he shuts the door behind us.
I think he means it to be a fast kiss hello, but when I grip the thick, smooth leather of his collar, I get another kiss. A tiny bit of tongue this time, a deeper breath. My hands linger on his neck—warm skin, impressive muscle. Kisses travel along my jaw and linger on my ear. He inhales again, breathing me in.
I’m dizzy now. I’ve forgotten all my worries, forgotten to say hello. My fingers are in his hair, rubbing at where it’s short, grabbing at where it’s longer. I turn my face and find his lips again, wanting his breath, his tongue, his sounds.
When he gives it all to me, I sob in relief and the kiss remixes into something hardcore. Our tongues can’t move fast enough, our teeth clash, but the beat is good, good, good.
His hands seek skin under my sweater, gripping the curve of my lower back before riding up to find the sensitive spots along my shoulder blades. I shudder.
“Sage. Baby. Damn.” He nibbles the words against my cheekbone, my eyebrow, my forehead. “Let’s get out of the entry. My coat…”
“Fuuuuck.” I take an unsteady step back. “Sorry. Hi.”
He chuckles, one hand sweeping over my hair as he shrugs out of the jacket. “It’s gonna be okay. But we need to slow down.”
“I was thinking speed might be nice.” There might be a slight whine in this comment.
He kisses my cheek. Speedily, but not the way I meant it.
“I’m going to hang this up.” He steps to the closet. “We’re going to take a moment to breathe. And then we’re going to have a conversation.” He glances at me as he hooks the jacket over a hanger.
“A conversation?”
“Yeah.” His smile makes his eyes crinkle. “That’s one of the things people do on a first date.”

Edie lives in Vermont with her husband, two sons, and random creatures that might or might not be pets. She loves libraries (where she’s found play, work, and love since she was a kid), long walks (unless ice is involved), lewd language (in the right context), luscious romance (of any variety), and alliteration.