IM By Rick Reed - Release Blitz with Excerpt and Giveaway

One by one, he’s killing them. Lurking in the digital underworld of Men4HookUpNow.com, he lures, seduces, charms, reaching out through instant messages to the unwary. They invite him over. He’s just another trick. Harmless. They’re dead wrong.

When the first bloody body surfaces, openly gay Chicago Police Department detective Ed Comparetto is called in to investigate. Sickened by the butchered mess of one of his brothers left on display in a bathtub, he seeks relief outside where the young man who discovered the body waits to tell him the story of how he found his friend. But who is this witness…and did he play a bigger part in the murder than he’s letting on?

Comparetto is on a journey to discover the truth, a truth that he needs to discover before he loses his career, his boyfriend, his sanity…his life. Because in this killer’s world, IM doesn’t stand for instant message…it stands for instant murder.

Tony didn’t know that logging on to Men4HookUpNow.com would be one of the last things he would do.

The simple blue-and-white instant message box was a blank canvas, containing only a list of provocative screen names: musclestud, pnpjock, pozpup4u… And any one of these screen names could spring to life by sending Tony an instant message or, as everyone called them, an IM. Anyone could arrive within its simple frame: a college football player, a construction worker, a truck driver, or just a man in tight jeans and engineer boots.

There was a pinging sound, and a message appeared on the screen. Tony leaned forward to see who had come to call.

“Come on, man,” Tony whispered, fingers poised above the keyboard. “Hi? Can’t you do better than that?” He wanted someone with a bit more personality this languid August night, so he hit the Delete key and banished the guy into limbo, where someone else might take his “Hi” with a little more encouragement. Tony began a scroll through the “Available Now” guys, reading the inane descriptions (“Let this hot, beefy muscle boy serve you. I’m six two, red hair, green eyes, former All-American football player;” “Aggressive bottom looking for well-endowed top men. I’m into just about everything except for scat, and I know how to take orders;” “Looking to party with a hot stud;” “Straight-appearing and acting;” “Negative… UB2”) and stopping if one of the thumbnails caught his eye, especially if the guy had the courage to show his face.

Tony idly stroked himself as the images paraded past. He asked himself why he was bothering with going online. For Christ’s sake, here it was, Saturday night. Couldn’t he throw on some jeans and head down to Halsted Street? At least in a bar, he would know for sure what the guy looked like if they decided to hook up, rather than seeing a cock shot and hoping the guy had a nice face or trusting a face pic a decade old. This way, all he had to work with was exaggeration, living in a world where “stocky” and “football-player build” meant fat, where thirty-eight-year-olds tried to pass as twenty-nine, where any bald guy could lay claim to looking like Bruce Willis, where average meant so hideous you might as well hide under a rock.

The instant message box popped up.

Well, at least better than “Hi.”

“Know what you mean, dude.”

So the guy was playing the macho game with him.

Tony felt himself transported. It was like the guy got into his head, reading the ingredients for his perfect fantasy man. His dick started to rise with anticipation, and he found his hand moving up and down the length of it, almost of its own accord. He clicked on the guy’s screen name on the instant messenger list, jock4play, and was disappointed to see no pictures in his profile. Still, if the description was accurate… Tony typed in: “Yeah, I’m twenty-eight. I’ve got dark blond hair, green eyes, moustache, goatee. Smooth swimmer’s build. Work out a lot too. Um. Got about seven, cut, shaved balls. Check out my pics.”

“You a top or bottom?” There wasn’t even a pause, so Tony wondered if the guy had bothered to look.

“Pretty open. I like it all. Very versatile. How about you? What are you into?”

“Sure. Whereabouts are you, man?”

“Yeah, me too. I’m in Rogers Park, Touhy and Ashland.”

Tony swallowed his common sense as the image of his fantasy man took over. “You wanna come over?”

“Yeah.” Tony loved little more than getting high and getting down. “Tina’s here.” Tony eyed the little glass pipe, its bottom crusted with black residue and white powder. His nerves—right along with his libido—were in overdrive.

Tony looked briefly at the TV, where a hairy-chested drill sergeant had a lithe blond “private” bent over his desk. He wanted to get things moving, so he typed: “You wanna call me?”

“My cell is 555-7654. Call me right back. Okay?” Was that too pushy? Many times they never bothered to call. Many times they said they would show up and never did. But once in a while, it all came together.

His cell chirped. He flipped it open. “Hey.”

“God, I just need some dick. You interested in hookin’ up, man?”

“The sooner the better.”

“Got somethin’ to write with?” And Tony got busy, giving precise directions to his apartment.

Precise directions to a stranger.

After he hung up, Tony felt flushed, a deep burning radiating from chest to face. His heart pounded as if he had just done a big hit of poppers. God, the guy sounded incredible! He suddenly knew why he was doing this as opposed to going out to a bar. When the site worked, it worked. There was no bullshit, no game playing. No eye contact for an hour, no fumbling for something to say and then sounding like a dork. When it worked with the site, it was simply two lusting men getting together and pleasuring each other. They didn’t need to say a word. Then why not a bathhouse? Tony asked himself, wandering around the apartment, folding up newspapers and throwing magazines in the wicker basket he stored them in. He remembered Man Universe and the last time he was there. It was okay, he guessed; there wasn’t the usual amount of bullshit. He thought with a grin of the open doors and the guys lying within, naked on their stomachs, the white moons of their asses a focal point, the bottles of lube and poppers on the little tables beside the beds. But the bathhouse lacked one thing the Men4HookUpNow offered: the element of surprise. Having someone show up after making an online connection, there was always that breathless moment when you opened the door to see what you were getting. Even if you had seen photos, it was always a crapshoot. A grab bag. And that’s what made it so exciting. The gamble made the rewards all the sweeter. And, hey, if you lost one time, you just said “Sorry,” closed the door, and got back online.

There was no shortage of hot guys online.

Or at least adequate ones.

Tony glanced at himself as he passed the mirror in his dining room, grateful he had worked out earlier in the day, grateful for the fact that he never had to exaggerate. His blond hair was buzzed, and his muscles had good definition. His lips were slightly pouty, giving his face an aura of innocence defiled… Details in his face combined to form a very pleasing contradiction: sleazy and at the same time babyish, childlike.

And sometimes he wished he did. He thought of him, the asshole who was always around, the one who, after three dates, couldn’t handle his request to be just friends.

But think of that another time! A party was coming up. And Tony wanted to make sure this party was of the all-night variety.

He headed for the kitchen to take the poppers out of the freezer. He held the little brown glass bottle up to the light and shook it. It was about at the halfway point, certainly enough to see him through the evening.

In the bedroom, he placed a couple of towels on the nightstand, along with a bottle of Wet. At the portable CD player, he put in Delirium—great fuck music—and he made sure the votive candles were adequate enough to burn for the hours he planned on taking with this guy, if he was as good as he sounded.

Tony turned to the mirror once more, running his hand through the blond spikes, making them stand on end. He flexed his biceps and was pleased at the image the mirror threw back.

He reached in his dresser drawer, pulled out his metal cock ring, and slid it over his dick and balls. He strapped a metal band with studs around his right arm “Perfect,” he whispered to his grinning reflection.

Blood pounded in his ears. A line of sweat formed at his hairline and under his arms.

Tony walked slowly to the intercom box in the front hallway, not wanting to appear too eager. Desperation was never pretty.

It sounded once more before he placed his hand on the Talk button. “Yeah?”

“It’s your buddy from online.”

Tony pressed the button marked Door and then the one marked Listen so he could hear the guy coming in. He hoped he wouldn’t be disappointed.

It was hard to tell, but the guy’s voice didn’t sound quite as deep as he thought it had when the guy called his cell. Perhaps the intercom was just distorting his voice a bit.

But there was something else. No, it couldn’t be…but the voice had a familiar cast to it. Tony wondered when the day would come when he ran into someone he knew from Men4HookUpNow.

Perhaps the day was today.

But the familiarity of the voice didn’t have pleasant associations.

Anyway, there was no time to think about that now, not with the guy tapping on his door.

Tony peered through the peephole.

He didn’t like that. But the guy was probably standing to the left or right of the hole, that’s all. Good sense deserted Tony, usurped by lust.

He opened the door, and the color drained from his face. “What the hell are you doing here?” 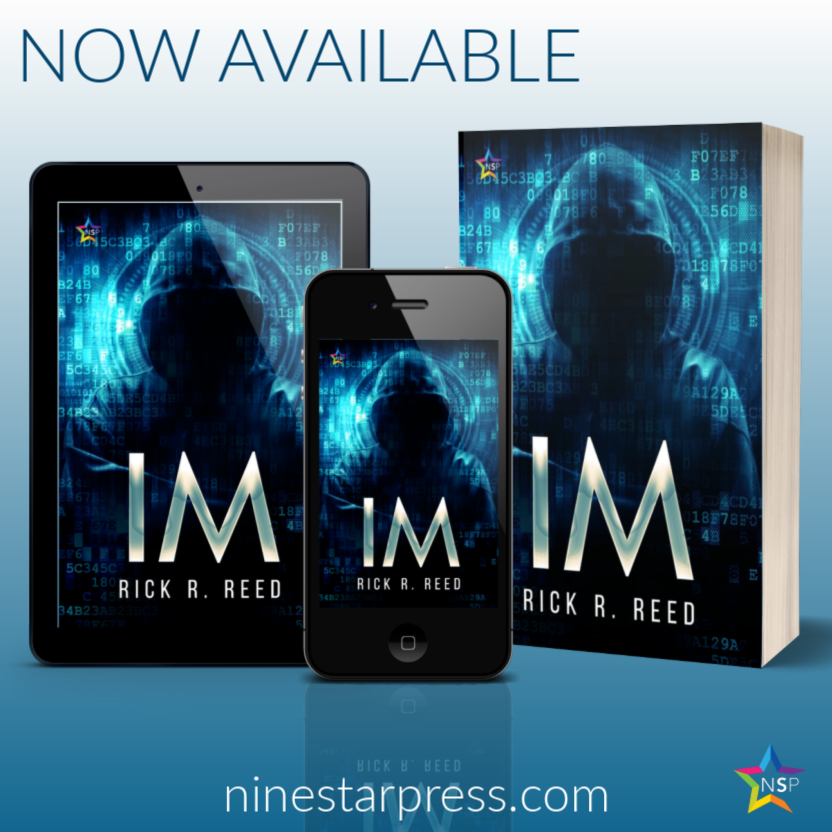 Real Men. True Love. Rick R. Reed draws inspiration from the lives of gay men to craft stories that quicken the heartbeat, engage emotions, and keep the pages turning. Although he dabbles in horror, dark suspense, and comedy, his attention always returns to the power of love. He’s the award-winning and bestselling author of more than fifty works of published fiction and is forever at work on yet another book. Lambda Literary has called him: “A writer that doesn’t disappoint…” You can find him at www.rickrreedreality.blogspot.com. Rick lives in Palm Springs, CA, with his beloved husband, Bruce, and their fierce Chihuahua/Shiba Inu mix, Kodi.