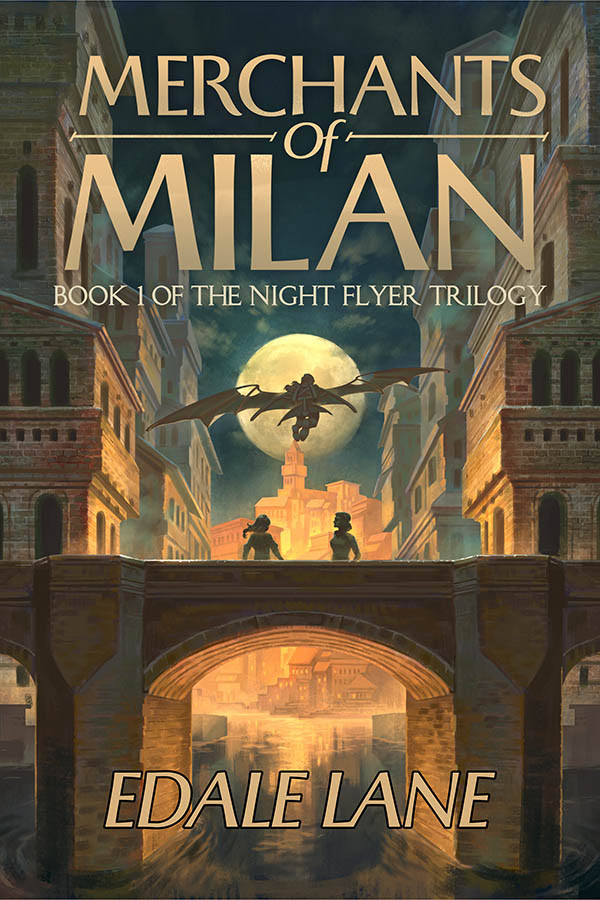 Edale Lane has a new FF historical romance out, book one of the Night Flyer Trilogy: "Merchants of Milan."


Florentina, set on revenge for her father’s murder, creates an alter-ego known as the Night Flyer. Madelena, whose husband was also murdered, hires Florentina as a tutor for her children and love blossoms between them. However, Florentina’s vendetta is fraught with danger, and surprising developments threaten both women’s lives.


Merchants of Milan is the first book in Edale Lane’s Night Flyer Trilogy, a tale of power, passion, and payback in Renaissance Italy. If you like gadgets and gismos, rich historical background, three-dimensional characters, and fast-paced action with a slow-boil lesbian romance, then you are sure to love this series. Buy this one of a kind novel today and let the adventure begin!

Edale is giving away a $20 Amazon gift card with this tour. For a chance to win, enter via Rafflecopter: 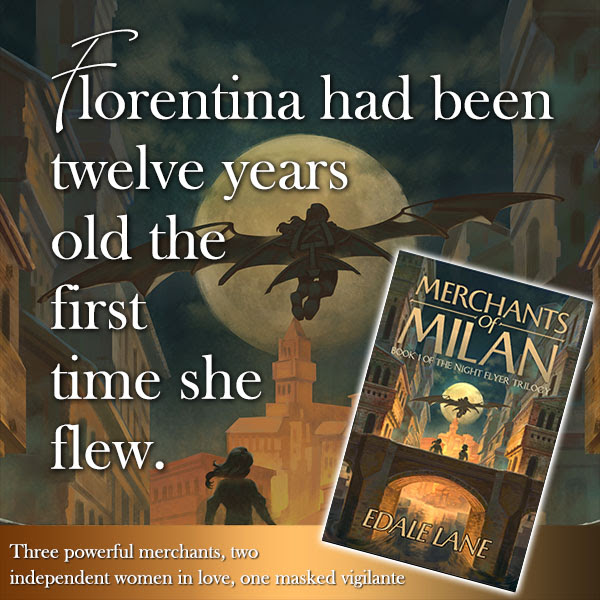 In the next instant Maddie placed a caressing hand to her face, leaned in, and kissed her. Although she had been anticipating this very possibility for hours, it came on her as swift and unforeseen as a summer storm. The sensual heat of those urgent lips melded to hers ignited something deep within Florentina’s core that sprung to life for the very first time and exploded throughout her being, a sensation so phenomenal, so novel that she had no context in which to place it. Breathless, her mind went totally blank, and she simply savored the moment.

When Madelena withdrew she whispered, “I’m sorry, I didn’t mean to overstep.”

“Sorry?” Florentina’s heart sank and her head spun. How could she be sorry? “Why? I’m not.”

“You’re not?” Maybe Maddie was as uncertain as she, as overcome with raw emotion and not knowing how to express it. “It’s just that–and I have contemplated this–with me being your employer and all, I don’t want you to expect you must do something you aren’t comfortable with. I would never pressure you-”

It was Florentina’s turn to be impulsive. She silenced Maddie by repeating the gesture, tasting again those full, cherry lips that flooded her mind, body, and soul with sensations. When it broke, they gazed into each other’s eyes looking for confirmation. “I understand I am only a servant in your household.”

“Don’t say that!” Maddie replied firmly. “That is not how I view you. Please, Fiore. How can I explain?”

The earlier butterflies began to settle in Florentina’s stomach and the fog of trepidation evaporate. She could perceive that the beautiful wealthy widow did regard her with esteem, did have feelings for her. This was not a mere dalliance she realized. “I care for you also,” she spoke softly and stroked Maddie’s luxurious strands. “Do not think you press me to do something I have not wanted to do since the moment I first saw you.”

Relief engulfed Madelena’s expression, and she brushed her cheek to Florentina’s then nuzzled her neck with moist, eager lips. A euphoric sigh escaped Fiore’s mouth at the intimate touch and she pulled Maddie closer. When their lips found each other’s again she opened to the honey-sweet tongue that was impatient to delve into it. Without willing them to do so, she realized her fingers were wound in those silky red strands while her other hand slid down Madelena’s back as far as the bench would allow. She could perceive her heartbeat against her own heated breast. This is what she had dreamt of and it surpassed her expectations. All she wanted to do was touch, caress, explore, and please this singular woman. Even as she was rendered breathless from the physical passion, her heart was telling her head that what she felt was far more, endlessly deeper. It was a very dangerous cavern, a bottomless pit that could spell her doom; she was falling in love.


#
Madelena realized she was making a mistake. She had acquired a good tutor for her children and a new friend to share meaningful experiences with, but a romantic affair? Where could that possibly lead? What would her brother think or do when he found out, and she knew he would, eventually. Hadn’t she lived a well-disciplined life? Could she not control her desires for more than a few weeks?

As her mind was blaring at her all the reasons to say no, her heart had been pleading an opposing case. Yes, she had found a teacher and a friend, but in Florentina she had discovered abundantly more. She was interesting, witty, talented, intuitive, and compassionate. She opened whole new worlds to the widow whose entire education was meant only to prepare her to be a merchant’s wife. For the past six months she had felt lost, as if she had no place and no purpose. She had helped Alessandro with the bookkeeping and personal relations with customers, but she had also spent her nights alone speculating on what the future may hold for her. She still could not answer that question, but she had spoken honestly when she said that Fiore made her feel real and alive. Since growing closer to the dark-haired inventor’s daughter she had begun to experience so many things. And today–today had likely been the best day of her twenty-eight years on this earth! Then the emotion of sharing her story, it was just all too much to expect her to maintain self-control. But now that she had initiated this passionate encounter, what would she do next?

Presently, she drew back from those sultry lips trying to regain some restraint. “Have you ever been with a woman before?” she asked to fill the silence.

Florentina shook her head. “If you mean sexually, I am quite inexperienced with anyone, male or female. Years ago when Cesare told me he was attracted to men, I mentioned that I was more drawn to women. I didn’t think he’d ever say anything; it’s not like we talked about it much, but now,” she paused casting starry eyes at Maddie, “I’m glad he did.”

She smiled and stroked Florentina’s cheek. “So am I.”

What indeed! Madelena considered. “Take one step at a time. May I suggest we try to get some sleep and take a night to process it all? I’m feeling a bit overwhelmed at the moment.”

“You’re overwhelmed?” Fiore laughed. “I’m not certain my legs will carry me upstairs!”

Maddie hesitated to move, as the tug of an invisible cord was drawing her back to her newfound treasure. Neither was Florentina was moving away. One more kiss and you must move. Give both of us time to think. She touched her lips to Fiore’s and closed her eyes. What makes one kiss a sloppy flop and another a driving, sensuous pleasure? Is it one’s mental perception or a physical current that connects two individuals who are similarly charged? I can feel the energy pass between her and I unlike any other before.

“I shall see you in the morning.” She released Florentina and pushed herself to her feet with a sheer force of will. Florentina followed saying her good-nights and Madelena closed the bedroom door behind her as she left. Alone once more, she glanced around her empty chamber and wished her lover could have stayed all night. 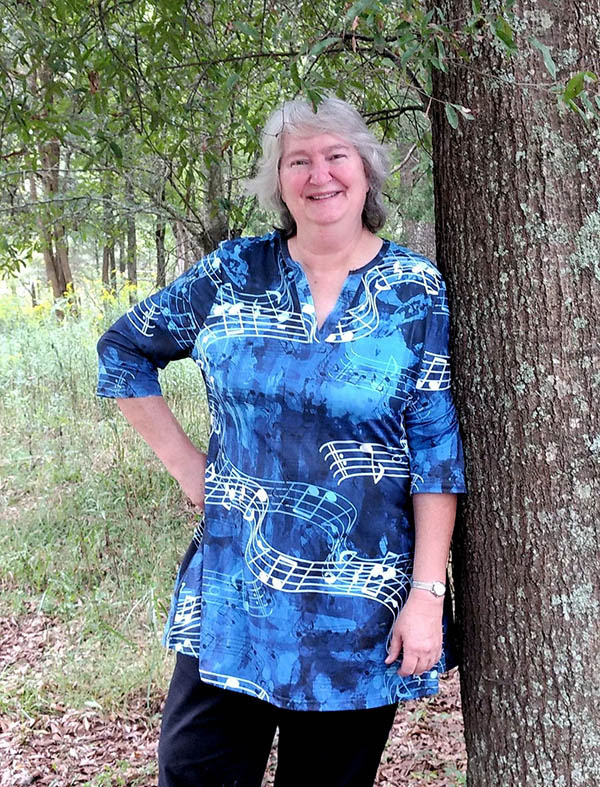 
Ms Romeo is a retired school teacher who currently travels the country as an over the road truck driver. Her first book, Vlad, a Novel, an historical thriller, was published in 2002. She has had short stories published in anthologies by Seventh Star Press, Charon Coin Press, Alban Lake Press, Less Than Three Press, and Past and Prologue Press.


Edale Lane’s first novel, Heart of Sherwood, is an historical retelling of the Robin Hood story supposing that the hooded outlaw had been a woman:


In addition to driving and writing, Melodie is also a musician who plays the French horn, composes, and has spent many years as a choral and instrumental director. She aspires to be a successful enough author to quit driving and devote herself to writing fulltime. Melodie resides in Utica, MS with her longtime partner, Johanna.


Some of her works can be found at http://www.amazon.com/-/e/B00WFFFEA4


In 2019 Melodie founded Past and Prologue Press. Please visit her website.