It can be read as a standalone, but is book #5 of the Witchbane series. 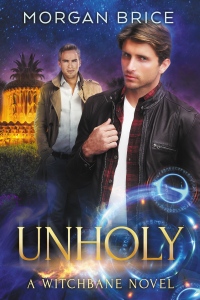 A deadly curse on Seth and Evan means time is running out.
Can they find a way to turn the tables, or is Charleston their final destination?

A cycle of ritual murders. A coven of dark warlocks, drawing their immortality from the magic of their dead master. Two men sworn to stop the deaths, destroy the warlocks and avenge the victims. Except this time, the killer is hunting the hunters.

Seth Tanner swore vengeance on the dark witches who killed his brother, Jesse. He rescued Evan Malone from one of the witches, and they’ve fallen in love despite the danger and chaos, going on the road to complete the quest and bring an end to the ritual murders. Their relationship is still new, tested at every turn by danger and magic.

Seth and Evan head to Charleston to stop the next warlock and save his intended victim. But this time, they’re too late. The warlock has already powered up, and he’s determined to destroy the two hunters one way or another. A deadly curse on Seth and Evan means time is running out. Can they find a way to turn the tables, or is Charleston their final destination?

Unholy is an urban fantasy MM paranormal romance with plenty of supernatural suspense, hurt/comfort, hot sex, found family, dark magic and paranormal thrills. It is part of a series but can be read as a standalone and features an evolving, established romantic relationship with all the feels. Intended for readers 18 years of age and older.

“Hi, and welcome to Charleston,” Alicia said. “I’ve heard a lot about both of you.”

That left one other person. He looked to be in his late twenties, with blond hair in a trendy cut, high cheekbones, and gray eyes the color of the sea after a storm. Unlike the others, he didn’t have a drink or a plate in front of him. The man’s appraisal made Evan shiver, although nothing in his manner seemed hostile.

“This is Sorren,” Cassidy said. “He’s my business partner, and he and my ancestor founded Trifles and Folly—my shop—back when Charleston was first chartered.”

Seth and Evan exchanged a glance. “But Charleston is over three hundred years old,” Seth protested.

Sorren smiled, and Evan caught his breath as he glimpsed the tips of fangs behind his lips. “You’re correct. And I am nearly six hundred. I am deeply interested in finding out about this witch-disciple you hunt. He has, apparently, gone to great lengths to avoid my notice.”

As soon as Sorren spoke, Evan wondered how he could have thought the man was close to his own age. Sorren had a presence that made it easy to believe he was immortal. Instinct warned him not to meet Sorren’s gaze, and he remembered stories about a vampire’s ability to glamour mortals and bend their will.

“Don’t worry. You’re safe here,” Sorren said, apparently noting Evan’s uneasiness. “You are guests in Cassidy’s home, and allies. That puts you under my protection—something I take very seriously.”

Evan pasted on a smile and nodded. Holy shit. What have we gotten ourselves into?

“You already know Teag, and I believe he and Seth have bonded over hacking to get information on some of the cases we’ve worked on. But his ninja computer skills are really an outgrowth of his Weaver magic,” Cassidy said, “which you know at least something about, from the spell-woven braided bracelets you gave each other for your birthdays.”

She sat at the table beside Teag. “Eat first, and then we all want to hear your story.”

Evan wasn’t sure what might pass for normal conversation with this crew, but the banter felt comfortable and familiar. They obviously knew each other well and were friends as well as colleagues. While they ate, the conversation drifted to local happenings, upcoming events, and the shared frustration that went with having to avoid road construction. Even Sorren commented now and again, and Evan noticed that no one at the table seemed to regard him fearfully. Evan glanced at Seth and knew from the look on his boyfriend’s face that the mental wheels were turning, appraising their new allies.

When everyone had their fill of the pizza and had topped off their drinks, the chatter stopped, and they all looked to Seth and Evan. Teag stepped away and returned with his laptop.

“We know a little bit about your hunt for the witch-disciples from the information Teag helped you find in the past,” Cassidy said.

What's the genre you haven't written in but want to, and why?

I'd love to write some cozy mystery.

As Morgan Brice, I've got urban fantasy MM paranormal romance, and I'm planning some new shifter and alternative history/steampunk for this year. As Gail Z. Martin, I write epic and urban fantasy plus steampunk and near-future post-apocalyptic adventure. But I love reading cozy mysteries, and I haven't written one yet.

Switching genres is a challenge for an author because each genres has its tropes, structure, expectations, 'beats'. An epic fantasy doesn't unfold the same way an urban fantasy or romance does. The number of point-of-view characters is different, as are the types of point-of-view that are conventionally permitted. There are different expectations in how magic works, and the level of violence and explicit sex. The length and the number of plot threads differ. That's especially true when dealing with a different time period, whether that's medieval, Victorian, or something else. A lot of research goes on behind the scenes!

Different genres also vary in their pacing, the kind of vocabulary and sentence structure used, the style of humor. It really requires getting into a different head space as an author, and knowing the rules for that particular genre, even if you choose to break some. And you can't break too many, or readers won't be happy because it doesn't fit the type of book they expected.

That also makes it challenging as an author, and switching it up keeps me fresh and on my toes. It's a risk. But it's also lots of fun, especially when it's a genre I love as a reader.

So there would definitely be a learning curve. But I have two different cozy mystery series in mind--one for Morgan Brice and one for Gail Z. Martin. Now I just need to find the time!

Series include Witchbane, Badlands, and Treasure Trail. Watch for more in these series, plus new series coming soon!

Enter the Rafflecopter giveaway for a chance to win