The Heart As He Hears It by A.M. Arthur - Release Day Book Blast with Review and Giveaway 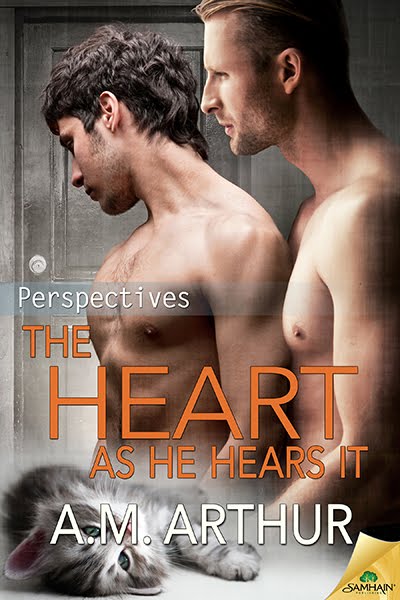 And with Henry’s happiness paramount, Jon is on a mission to help Henry meet his recently discovered grandson.

Isaac Gregory hasn’t set foot outside for the past year. He has everything he needs delivered, and his remaining family knows better than to visit. When a complete stranger shows up claiming to be his grandfather—with a distractingly handsome younger man in tow—his carefully structured routines are shaken.

Despite his instant attraction, Jon senses Isaac is too fragile for a relationship. Yet tentative friendship grows into genuine companionship. And when Henry’s health begins to fail, they realize Fate brought them together for a reason.

Also available in audiobook format with Guy Locke as the narrator

Jon studied him, his gaze taking in…something. “May I ask you something?”

“Of course.” His chest flushed with anticipation.

“How do you feel when you’re with me?”

Isaac tried to push aside the anxiety still attempting to blur his thoughts, an old friend that wanted to be part of the conversation. Only anxiety wasn’t allowed in, not this time. He shuffled through different words, emotions and adjectives, searching for the one that best described how he felt about Jon. How Jon made him feel, despite being a near-stranger, bigger, stronger and far more experienced in pretty much everything. Jon still made him feel… “Safe,” Isaac said.

Jon’s eyebrows crept up. The corners of his mouth quirked into something not quite a smile. “Really?”

“Yes. The first time I saw you on my security feed, I noticed how beautiful you were.” His cheeks warmed.

“You’re kind and patient, and I feel safe because you don’t try to fix me, and you don’t act like I’m broken. My family thinks I’m broken, and I don’t want them to fix me. I just…” Something in Isaac shifted, accepting this new truth. “I need to feel safe, Jon. That’s why I hide. But you make me not want to hide.”

Jon’s eyes glittered. His expression melted into something so warm, so sweet, that it burned in Isaac’s blood in a way he didn’t understand at all. The strange sensation urged him to reach out, to initiate contact of some kind. Deep-rooted fear kept Isaac still, unable to make that first move. Unable to do anything except soak in the wonderment on Jon’s face.

“I think that’s the greatest compliment I’ve ever gotten,” Jon said. His voice was hoarse, strange. Almost difficult to hear, so Isaac paid more attention to his lips. “Is it cheesy to say your strength makes me want to be better too?”

“You’re stronger than you think. You proved that by letting me and Henry in two weeks ago. You proved it again by going out to rescue a kitten. Twice, by the way. You told me you want to get better, get into the world, and that takes a fuck-ton of courage when you’ve lost as much as you have. I know it won’t be easy, but I still want to help you do that.”

The Heart as He Hears It is the third book in A.M. Arthur's Perspectives series. It's possible to read this as a standalone but I highly recommend reading this series in order. Not only is it an excellent series but the characters show up in each other's books. I'm a huge fan of both the author, and this series in particular.

I'll be honest, I wasn't sure how the author would top the previous book which I absolutely loved even while it wrecked me. She totally got me with this one.. Isaac stole my heart within the first 25% of the story. Between his backstory of his childhood, Isaac trying to over come his agoraphobia, and then add in this little ball of fluff kitten... well I was a goner. Don't get me wrong, I loved Jon as well, it's just that Isaac makes you want to give him hugs till he squeaks and make everything better for him.

There is a lot of story in The Heart As He Hears It. With Isaac finding out he has a grandfather he didn't know about in Henry, and meeting both Jon and Henry there is a lot for Isaac to deal with due to his agoraphobia and anxiety. After the trauma in his childhood, his hearing damage and hearing loss make things a little more difficult for Isaac to deal with when they encroach on his small corner of the world. Jon is dealing with Henry's failing health, the appearance of his ex-boyfriend who damaged his self-esteem, and allowing himself to be in a relationship again without closing himself off.

I like how A.M Arthur has her characters deal with their issues and faults, it's more realistic and less cutesy sugar-coated goodness. Her characters feel like someone you'd know in real life, their stories are less sweet and again based more in reality than fiction. Don't get me wrong, I love sweet, fun, light-hearted stories as much as anyone. The older I get though, the more I want to read stories where the couples have to deal with realistic situations, and not always be perfect cookie cutter characters.

No two of A.M Arthur's characters 'feel' the same, they may have similar stories on some but it doesn't feel like she simply changed their names and place locations and voila! new story. While she may have some trope elements in her stories they're always fresh and something just different enough that you hide away with the book until it's done. And then you're totally sad it's over and want the next book NOW!! Which is kind of what I'm doing now... totally craving her next book and/or series. If you can't tell yet, A.M. Arthur is an auto-buy author for me because I trust that her books are going to satisfy my reader craving for a good story, great characters, and even a little angst to make me eagerly turn each page until I reach the end.

This is a must read if you're a fan of this author, and if you've never read A.M. Arthur what are you waiting for??

A.M. Arthur was born and raised in the same kind of small town that she likes to write about, a stone's throw from both beach resorts and generational farmland.  She's been creating stories in her head since she was a child and scribbling them down nearly as long, in a losing battle to make the fictional voices stop.  She credits an early fascination with male friendships (bromance hadn't been coined yet back then) with her later discovery of and subsequent love affair with m/m romance stories. A.M. Arthur's work is available from Samhain Publishing, Carina Press, Dreamspinner Press, and SMP Swerve.

When not exorcising the voices in her head, she toils away in a retail job that tests her patience and gives her lots of story fodder.  She can also be found in her kitchen, pretending she's an amateur chef and trying to not poison herself or others with her cuisine experiments. 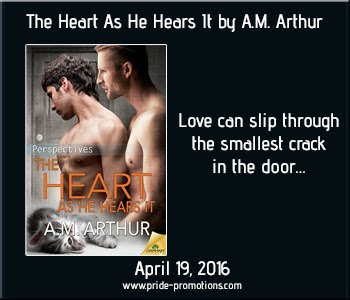