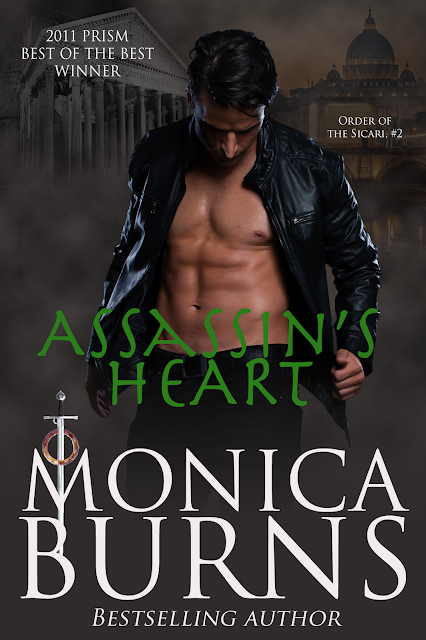 Assassin's Heart
(Order of the Sicari #2)
by Monica Burns

Can the truth of the soul Conquer the pain of its ancient past.

Unlike other Sicari, Lysander Condellaire has telepathic and telekinetic powers. Not until the night a Praetorian tortured him and left him for dead did he understand why. Now, the half-angelic, half-demonic face he sees in the mirror is a reminder of the monster he must keep hidden or face expulsion from the order of assassins known as the Sicari. But his dreams of ancient Rome hint at a destiny difficult to accept, especially when it involves the woman he loves, but can never have.

A gifted healer in the Order, Phaedra DeLuca witnessed her mother’s murder when she was a little girl. The haunting memory makes her loathe everything Praetorian. When she travels to Rome in search of an ancient artifact, she must work alongside a man who once cruelly rejected her love and healing touch. But her dreams of ancient Rome tell of an irreversible and possibly dangerous future. For the distant past and present are about to collide–with the one man she is destined to love.

Suddenly, a strong hand gripped her wrist, and in less than a second, he’d pulled her to her feet. Stark need tightened his features, but he released her and turned away. A wave of fury crashed over her, and she drew in a sharp hiss of air. The son of a bitch didn’t have the courage to love her, even though she knew he wanted to.

Every fiber in the man’s body was drawn to her, and he didn’t have the guts to admit it. A growl rumbled out of him as he slowly turned to face her. Her gaze flitted from the horrible disfigurement of his demonic side to his angelic profile, which was drawn up hard with anger. She glared at him.

“What?” she said angrily.

He didn’t answer her. Instead, he stepped back into her, his fingers slipping between her breasts to the fragile strip of material holding her bra cups together. The touch made her gasp, and she was suddenly aware of the cool air on her shoulders. She’d been so determined to chew him out that she’d forgotten she wasn’t wearing a shirt.

The heat of his fingers pressed against her skin, and with a sharp tug, his fingers broke the bra, the cups sliding off her breasts to expose her completely. Her immediate reaction was to cover herself. She’d been expecting him to pull her toward him, not undress her.

At least not yet.

She reached out with her senses and caught the faintest whisper of something dark. It was a part of him, and yet she could tell he fought it constantly. Surprised by it, she retreated from him until her back was against the wall. A savage look tightened his ravaged profile, and his unmarred side reflected an emotion she couldn’t describe.

Invisible hands caught her wrists and pulled them up over her head to pin them to the wall. She drew in a quick breath of surprise but didn’t take her eyes off his face. The terrible emotion he was struggling with wouldn’t win, she was certain of it. He would never hurt her. His features darkened, and he moved forward to brush his mouth over her shoulder. A primitive noise rumbled out of him.

“Is this what you want, Phaedra? A half man, half monster?”

With a turn of his head, he gave her a magnified view of his horribly scarred face. There was no eye patch to hide the eyelid sealed shut over the indentation where his eye had once been. From his scalp to his jaw, the twisted flesh was there for her to see in all its glory. His marred flesh broke her heart, not because of what he looked like, but because of the bleak note in his voice. His pain was deep. So far down, she wondered if her love was strong enough to help heal his spirit.

Order of the Sicari Series 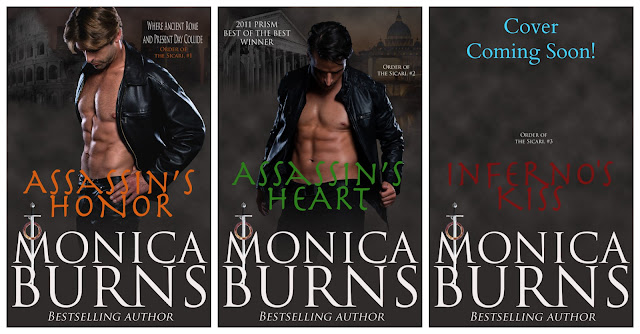 Assassin's Honor
(Order of the Sicari #1)

Monica Burns is a bestselling author of spicy historical and paranormal romance. She penned her first romance at the age of nine when she selected the pseudonym she uses today. Her historical book awards include the 2011 RT BookReviews Reviewers Choice Award and the 2012 Gayle Wilson Heart of Excellence Award for Pleasure Me.

She is also the recipient of the prestigious paranormal romance award, the 2011 PRISM Best of the Best award for Assassin’s Heart. From the days when she hid her stories from her sisters to her first completed full-length manuscript, she always believed in her dream despite rejections and setbacks. A workaholic wife and mother, Monica is a survivor who believes every hero and heroine deserves a HEA (Happily Ever After), especially if she’s writing the story.


You can find Monica at