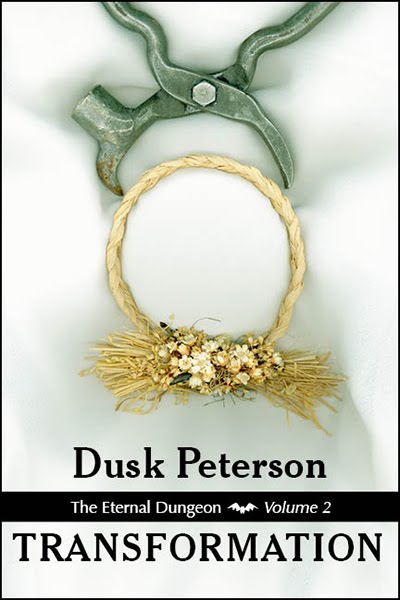 "Every psychologist of our day knows the origin of transformation therapy, though many prefer not to speak of it. It is considered embarrassing to be forced to admit that your primary tool for curing patients was developed by a group of torturers."

The Eternal Dungeon, a royal prison where criminals are transformed, has lost its leadership. The duty of returning the dungeon to normal falls on two Seekers (torturers) who are already burdened with their own problems. One Seeker is struggling to understand why an old love affair continues to gnaw at him. The other Seeker is faced with his greatest challenge: whether to risk the man who is most precious to him in order to save his own abuser.

A winner of the 2011 Rainbow Awards (within the "Eternal Dungeon" omnibus), this tale of love and adventure can be read on its own or as the second volume in The Eternal Dungeon, a speculative fiction series set in a nineteenth-century prison where the psychologists wield whips.

The Eternal Dungeon series is part of Turn-of-the-Century Toughs, a cycle of alternate history series (Young Toughs, Waterman, Life Prison, Commando, Michael's House, The Eternal Dungeon, and Dark Light) about adults and youths on the margins of society, and the people who love them. Set in the nineteenth and twentieth centuries, the novels and stories take place in an alternative version of America that was settled by inhabitants of the Old World in ancient times. As a result, the New World retains certain classical and medieval customs.

Excerpt:
"Has the High Seeker said anything that it would be useful for me to know, Mr. Taylor?"

After a minute in which the Codifier gave him a pointed look, Elsdon seemed to remember that he had been asked a question, for he said wearily, "No, he . . . he is concerned about the dungeon, of course. That is what he speaks of most of all – his concern that he has once again abandoned his duties. It's no use trying to make him think about his own health; he won't center his thoughts on himself. So instead I've been trying to make him think about . . . us. Him and me."

"You're perfectly right," said Mr. Bergsen gruffly. "Make him remember his love-bond with you, and that will keep him from losing touch with this world."

The Codifier picked up a pen, rolled it between his fingers for a moment, and said, with the finality of a magistrate about to pass judgment, "Do you have anything else you wish to add, Mr. Taylor?"

Elsdon looked as though he would have liked to speak, but he said nothing. Weldon felt pity enter himself as he watched the High Seeker's love-mate. It must be like waiting to see whether your loved one would be hanged. If the Codifier ruled that the High Seeker's renewed illness and long absence from searching prisoners was grounds to remove him from his work as a Seeker . . . Every man in this room knew that it would be a sentence of death to take that from Layle Smith. Yet, as always, the best interests of the prisoners came first.

Rafflecopter Prize: An e-copy of “The Breaking” (first story in the series)