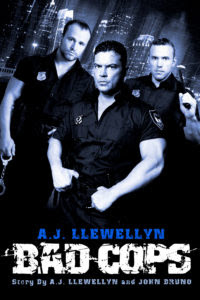 Bad Cop Diaries Book 2 - Jack Cannon’s sexy ex Will Tallman is a cop on the take…there’s nothing worse than a bad cop…or are appearances deceiving?

In this explosive sequel to Laid, a series devised by gay porn director John Bruno and written by A.J. Llewellyn, hotshot Los Angeles police Lieutenant Jack Cannon is back in action. With his lover Lucky out of town on assignment, Jack has too much time on his hands and too much aggression to wait patiently at home for him. With a multi-department takedown of a drug and gambling ring exposed in an old LA warehouse, Jack slips inside the ruined, crumbling building for some solo fun…except that a few other cops…and a bad guy or two have the same idea…some guys are just born to be bad…

Author’s Note: Every sex scene in this book was filmed for Massive Studios in a series of webisodes.

Summer held its grip on the city, even though it was November and the Christmas crush had started. Every hour on the hour, the song Let it Snow played on the piped music system of the Grove at Farmer’s Market. Fake snow fell from strategic spots on roofs and lampposts. It was so goofy when the weather was so unseasonably warm.

Lucky laughed as fake snowdrops landed on my cheeks. This outdoor complex, less than a mile from our house, was our go-to place and we loved it. We liked the fish family, as we always called them. We could never decide on the daily specials because everything was wonderful and dirt cheap.

The waitresses laughed with Lucky. Their hopeful stares faltered as he brushed white flakes from my nose and kissed me. There was no mistaking we were lovers. I veered between wanting people to know he was mine and keeping a safe, respectable appearance.

Stunned at the array of food they’d plied him with, I felt a wave of fury riding high in me.

“They gave you Shrimp Louie?” I asked, feeling a stab of jealousy.

“Of course. You know I pick my carbs. Say, let’s finish this. I smell the caramel corn popping.”

We ate in silence. We never ran out of things to talk about. It was our first awkward moment together. Ever. It took me by surprise because we never stopped moving our lips. They were either on each other’s mouths, asses, or cocks, arranged around food or great conversation. But we sat, both so quiet, the weight of truth hanging like a steel wrecking ball between us.

He decided to kick the ball.

“Jack, it’s only a few weeks. We’ll be together for Thanksgiving, one way or another.”

“Yeah, it sucks. But think how much fun we’re gonna have when we meet up again.”

He took my hand. “Popcorn calls.”

We pushed through the lunchtime crowd and bought a bag of it, still warm from the pot. We sampled some fresh coconut corn and bought a pound of that too. We loaded up on slices of fresh butter toffee after tasting tons of different blends. We couldn’t agree on the peppermint bark and chose candy cane bark instead. We snapped up miniature kiwi fruit and persimmons at the fruit stall. I was validating the parking ticket when I saw him open his cell phone.

We went home to our little studio guest house in back of a Pepto Bismol pink duplex on Havenhurst Drive. When I first met him, Lucky had a gorgeous house in the Larchmont district. It was an elaborate prop, part of his undercover disguise as a Mafioso. Now he was on to another secret assignment and I would still be here, working with my own team. There would always be busts, there would always be separations, but this was the first.

He put his hand on my thigh as we waited for a light on the corner of Melrose.

He stared straight ahead. “I’m going to ask you once and lie to me if you have to, but can you be faithful? Please tell me you won’t fuck anyone else. Please…just don’t do it.” 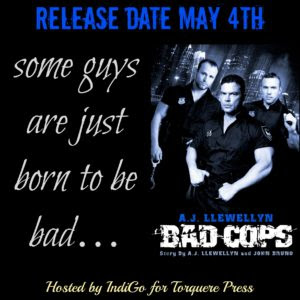 A.J. Llewellyn’s obsession with myth, magic, love, and romance might have led to serious stalking charges had it not been for the ability to write. Thanks to the existence of some very patient publishers, A.J.’s days are spent writing, reading and dreaming up new worlds. A.J. has definitely stopped Google-searching former boyfriends and given up all ambition to taste test every cupcake in the universe to produce over 200 published gay erotic romance novels. A.J. wants you to read them all. A.J. can be found lurking on Facebook and Twitter—part-time class clown being another occupation. When not writing or reading, A.J.’s other passions include juggling, kite-boarding, and spending a fortune buying upgrade apps for Pearl’s Peril and Farm Heroes Saga.

Rafflecopter Prize: One winner will be selected to win an eBook copy of Bad Cops