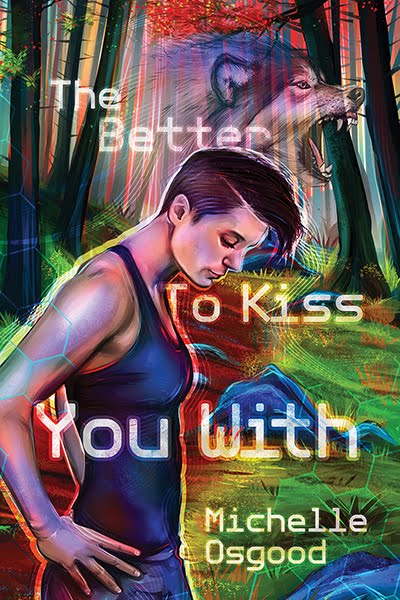 Deanna, the moderator for Wolf’s Run, an online werewolf role-playing game, wanders the local forest with her dog Arthur and daydreams about Jaime, the attractive, enigmatic woman who lives upstairs. When threats from an antagonistic player escalate, Deanna wonders if her job could be riskier than she’d ever imagined—and if her new girlfriend knows more about this community than she had realized.

“I think I know blood when I see it,” Deanna pointed out. “It was definitely blood.”
Beside her on the floor, Nathan leaned his head back against the couch and, behind the black frames of his glasses, rolled his bright blue eyes. “I’m not saying it wasn’t blood. But just, like, blood happens.”
“‘Blood happens.’ You sound like a tampon commercial.”
“Not true.” Nathan snickered over the top of his glass. “They never use the word ‘blood.’”
Deanna choked on a mouthful of wine.
“Anyway,” Nathan continued, “it was probably just a dead animal. Dogs love that stuff.”
“He wasn’t happy, though. He was scared. Something scared him. And Arthur’s brave. He doesn’t scare easily.” Deanna wiped the Pinot Gris from her chin and they both leaned forward to look at Arthur, who was sprawled artlessly on top of his dog bed and snoring loudly. Deanna smothered a giggle with the back of her hand and grabbed the bottle of wine.
“Just don’t confuse fantasy with reality. I think your job is messing you up.”
Deanna snorted. “Wolf’s Run is a just game, Nathan. I haven’t forgotten that.”
“Really? Because you’re talking about mysterious bodies torn up in the woods, and if that doesn’t sound like werewolves…”
Deanna gave Nathan a shove. “Ha, ha, very funny. I’m not like that weirdo who thinks that werewolves actually exist. It’s role-playing. Playing being the key word.”
For the most part, the players of Wolf’s Run were a good crowd—with the exception of one user who seemed to think that he actually was a werewolf. Apparently, he took offense to the game’s depictions of “his species,” considering them inaccurate and insulting. The rants had been going on for months, and the situation would have been laughable, except that in the last few weeks his posts had taken on a more threatening tone. Every time Deanna deleted his posts and blocked his username he simply created another account. The Wolf's Run team didn’t want to block his IP address because IP addresses could be shared by a large number of people, and doing so might block legitimate players from the game. Besides, it was child’s play to circumvent a block by logging in from a third-party app or web service, or just logging in from a different location. Deanna could only shut him down and hope that this time he finally gave up.
“Well, then just accept that Arthur found a bunny rabbit or something and decided it would be a good idea to roll around in its mangled corpse.”
Deanna shook her head. “You didn’t see him. It was a lot of blood.” It had taken two desperately unpleasant baths and an entire bottle of shampoo to get Arthur clean. Deanna had had to scrub her bathtub three times before she’d felt comfortable using it again.
Nathan grabbed her hand with his long, thin fingers. “Listen, you’re my best friend, and I love you, and I’m sure that it was really terrifying, but I’m also one hundred percent sure that you are blowing this way out of proportion. No more fantasy werewolf role playing nonsense for you.”
“Until my shift starts in…” Deanna tapped the screen of her phone. “Ten hours.”
“Until then,” Nathan agreed and clinked their glasses. “Now, tell me more about your hot neighbor.”
Deanna buried her head in her hands and groaned. “It’s awful. She’s gorgeous. And I can’t think around her. Or speak. I turn into a spluttering sixth grader with her first crush.”
“That’s disgusting and adorable. Tell me more. What’s her name?”

Today I’m very lucky to be interviewing Michelle Osgood author of The Better to Kiss You With.
Hi Michelle thank you for agreeing to this interview. Tell us a little about yourself, your background, and your current book.

Hi, thanks for having me! I’m a writer who lives in Vancouver, BC, with my partner Elizabeth and our two black cats.  I have a Bachelor of Arts degree in English, and have been fascinated with storytelling for as long as I can remember.  The Better to Kiss You With is a paranormal romance about Deanna, the moderator of an online werewolf role playing game, who falls for the mysterious woman living above her.

1)  Talk to us about your characters in this book. What makes them unique?

The main characters in The Better to Kiss You With are Deanna, Jamie, and Nathan.  Also probably Arthur, who is a golden retriever.  Deanna is great because she’s funny and un-self-conscious, and wears her heart firmly on both sleeves.  Jamie is a bit more reserved, and much more noble, and when she decided she likes someone she is extremely loyal. Nathan is a lot of fun and super smart, but he’s not quite sure what he wants from life.  Arthur is very sweet, but wilful, and has trouble obeying rules he doesn’t like—such as dogs not being allowed on the couch!

2) What was one of the most surprising things you learned in getting your book from start to publish?

The editing process was wild!  I had no idea that there would be so many people putting so much effort into my book.  It was amazing to see how much work remained to do, and the best part was seeing it pay off.  The manuscript I submitted to Interlude Press was good, but the published book is great, and that’s due to the hard work of several woman, not just me!  (Shout out to my wonderful editors:  Annie, Nicki, and Zoe!)

3) Have you ever gone to a convention? If so, how was it? If not, do you think it’s something you’d like to do in the future?

I’ve been to the Calgary Comic and Entertainment Expo several times, but never as an author!  I love it—my partner and I always have new costumes for each day.  I’d definitely like to go to a convention as an author, but I also love just going as a fan.  I’m such a pop culture junkie, it’s great.

For sure!  It’s certainly a goal I’m working towards.  I think one of the hardest things about writing full-time is the amount of discipline required, but after having sat my butt down and finished writing this book, I am much more confident in my ability to focus.

My favourite pizza of all time is a thick crust with tomato sauce, extra cheese, and pineapple!  It’s salty, it’s sweet, it’s delicious.

Michelle Osgood lives in Vancouver, BC, with her partner Elizabeth and their two cats. She has a Bachelor of Arts degree in English and has been reading, writing and blogging in online communities for five years. She likes to read romance novels, speculative fiction and feminist pop culture critique. 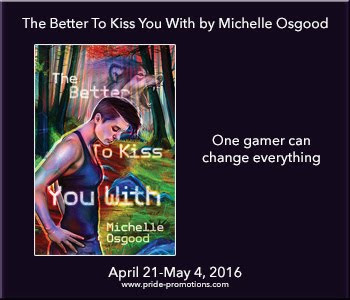 
Rafflecopter Prize: Grand Prize: $25 Interlude Press gift card. 5 first prizes of e-copies of The Better to Kiss You With by Michelle Osgood.